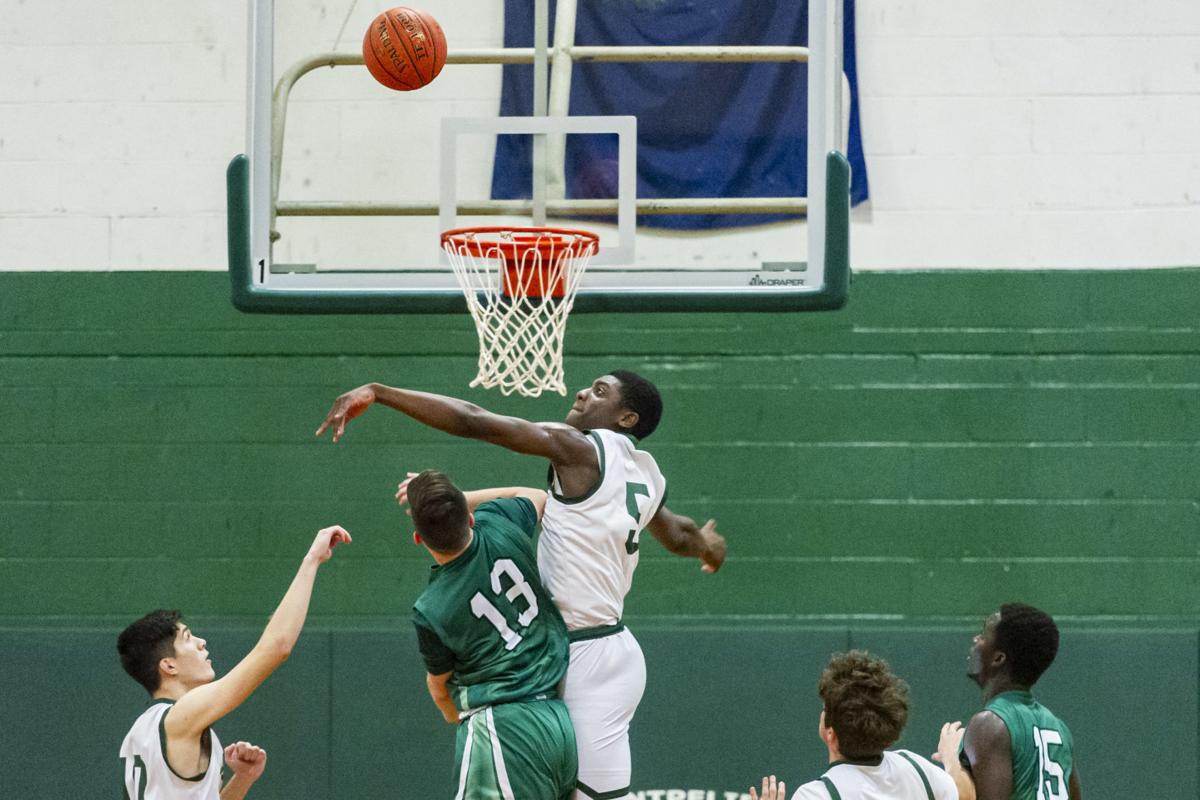 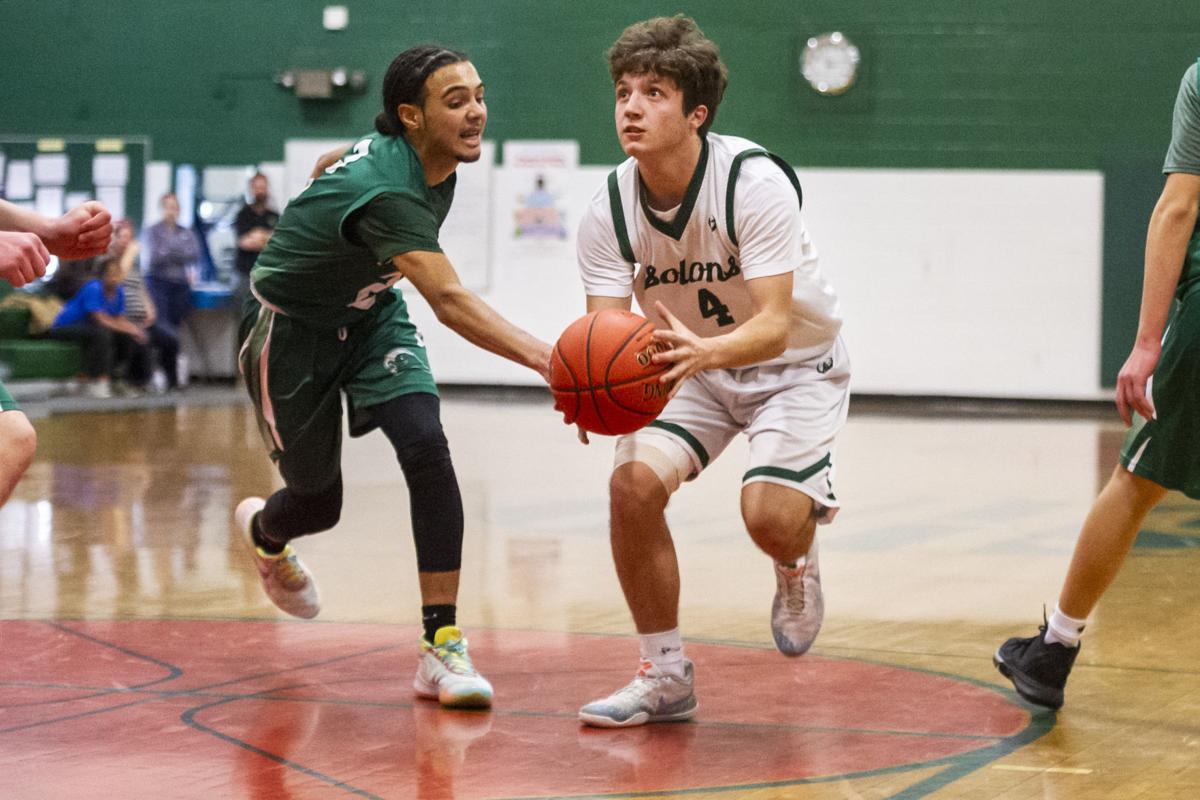 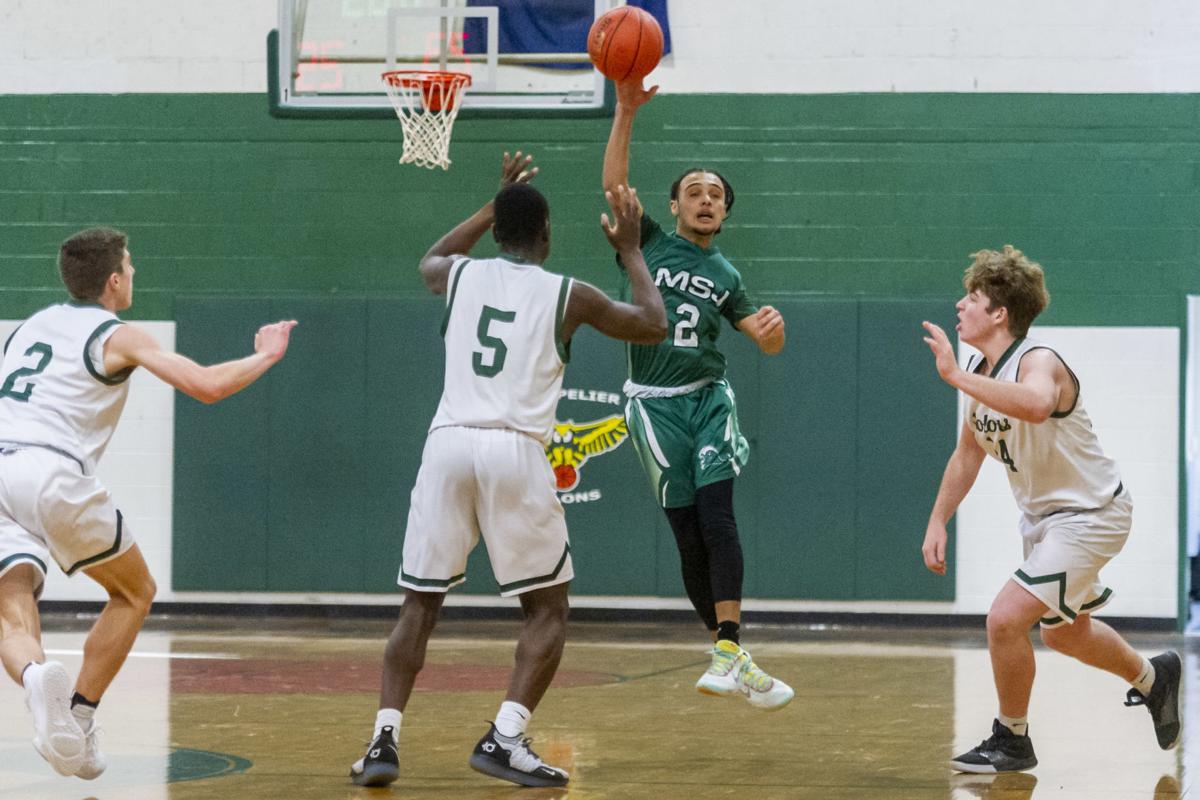 “It was a gutsy win,” Montpelier coach Nick Foster said. “We played really good defense and rebounded well enough. And then we we were able to take care of the ball and make some free throws down the stretch.”

Cattaneo (18 points), Tyler Ricker (15 points), Will Bruzzese (eight points) and Leo Riby-Williams (eight rebounds) powered the Solons. Foster was encouraged by his team’s 19-of-28 overall performance from the charity stripe, with Ricker going 6 of 8 in the fourth quarter.

“MSJ started fouling intentionally at the end,” Foster said. “We had to make a lot of free throws, and most of it was 1-and-1. We shoot a lot of free throws at practice when we’re tired, and we didn’t have great results in our first two games. We were 10 of 28 against U-32, and even worse against Hartford.”

A slow first quarter ended with Montpelier in front 7-6. The Mounties carried a 25-19 advantage into halftime before the Solons dug deep defensively to surge ahead 31-30 entering the final quarter.

“They have two really big, strong kids: Dave Mercure and Jake Williams,” Montpelier coach Nick Foster said. “And Andre Prunty is a sophomore point guard who’s a really good player. He does all the ball-handling for them and he made five 3-pointers.”

“Some of it was us getting the motor going a bit,” Foster said. “We sent more double teams on Prunty, making him give it up early and trying to get it back. And I think we tired him out eventually. He had a nice game, but he had to do a lot. And Will Bruzzese changed the game defensively for us. He was end-to-end today and he carried us on defense.”

WILLIAMSTOWN — The Bullets made their foul shots when they counted to rally past the Blue Devils on Sunday.

Williamstonwn led 20-9 at halftime and held a 21-17 advantage after three quarters. Paige Superneau and Jaycee Douglas both made two big free-throw attempts in the final quarter to give BFA the upper hand.

“We got down by four and had to foul the last 1:30,” Williamstown coach Sid Sweet said. “And credit to them: They hit their free throws and we couldn’t get a bucket.”

“We only dress seven right now because we have one player out sick,” Sweet said. “I think we ran out of gas today. We had 12 defensive rebounds in the first half and limited them to a lot of one-and-done’s. And in the second half it was a whole different story. They got a lot of second and third opportunities and they were wearing us down. And because we lost on the defensive end, it definitely hurt us on offensive end.”

RANDOLPH — Sophomore guard Ella Davignon scored all 15 of her points on 3-pointers Saturday, helping the Galloping Ghosts rally past the Marauders.

Northfield was in charge for most of the game, building a 10-7 lead in the first quarter. The Marauders led 23-17 entering halftime and held a 30-27 advantage after three quarters.

“We just started being a little more patient,” Randolph coach Scott Lafreniere said. “We adjusted our offense to what Northfield was giving on defense. The girls followed through on what we talked about at halftime and hit open shots that were available. I was proud of them for keeping their composure and not forcing things and just playing basketball.”

THETFORD — Six players scored at least six points Saturday for the Panthers, who handed Blue Mountain its first loss of the season.

“We had a good overall game today against one of the better D-IV teams,” Thetford coach Eric Ward said. “We are adjusting as we go. Due to illness and injuries, we started some different people today who did a nice job. We are having better ball movement and adjusting to a new defense. The second quarter probably was our best quarter of the season. We rebounded better today and eleven of the thirteen who played today scored. Casey and Lily MacVeagh had nice games off the bench and Kelsey Smith played very well in her first start. Emma Colby has become very steady for us. I’m excited to see what we can do as we move forward.”

Thetford will travel to play White River at 7 p.m. Thursday.

EAST MONTPELIER — Corbin Schreindorfer scored twice for the Thunderbirds on Saturday, while teammates Hunter Mason, Charlie Gate and Jackson Porter both recorded one goal and one assist. Kyle Gilbert and Owen Kane also scored for MVU. Logan Carbo recorded a hat trick for the Raiders and teammate Hazen Stoufer also scored. U-32 will host Milton at 4:15 p.m. Saturday.

MIDDLEBURY — Freshman Camryn Bell scored the game-winning goal with 14 seconds left in overtime on an assist by Molly Parker.

Zoe Tewksbury gave the Crimson Tide a 1-0 lead with 51 seconds left in the first period after beating two defenders. Merry Kimble tied the score midway through the second period. Taylor Moulton and Bella Gale recorded assists. Spaulding’s Molly Parker recorded her first varsity goal on an Emily Morris assist at the start of the third period. Middlebury pulled even with 2:22 remaining in regulation when Taylor Moulton scored on assists by Avery Gale and Bella Gale.

Bell had the final word in overtime after skating out wide and firing a forehand shot with a defender at her side. She beat Middlebury goalie Abby Hodsden (27 saves) with a shot to the lower corner. Goalie Mattie Cetin made 16 saves for Spaulding.

“Middlebury is so well-coached,” Spaulding coach David Lawrence said. “Matt Brush is one of the best and his girls gave us all we could handle. They are a great team. And our girls just didn’t quit. When Middlebury tied it late I reminded them, ‘We’re OK, nothing changes, you’re going to win if you stick with it.’ We’ve still got a lot to work on but I’m so proud of how hard these girls are working for each other. (It was a) full team effort, team first.”

“We played pretty well,” Harwood coach Mike Vasseur said. “Hartford stiffened up on defense and we took our foot off the accelerator a little bit. It was a 50-50 game in the second period. We came up big in the third and scored a goal, and their goalie made some key saves.”

Harwood (4-1) will travel to play Burlington-Colchester at 7 p.m. Saturday.

WATERBURY — Saturday’s meet came down to the wire before the Yellowjackets’ depth proved to be the difference-maker against the Solons.

Montpelier earned a podium sweep in the all-around competition. Jenna Krussman placed first with a score of 31.6. She was followed by teammates Eva Stumpff (31.55) and Luna Pompei (30.9).

“We had such a great meet today,” Montpelier coach Shannon LeBoeuf said. “We met a lot of personal goals, especially without having a full team and taking three zeroes. Our two independents, Peyton Lombardi from Spaulding and Leah Brown from U-32, also competed for their first high school meet today. I had set a goal in my head to break 100 for the team score, and the girls did just that. They had pretty clean and powerful routines today, and I couldn’t be more proud of them. They take on the challenge of only having three scores count on three events and do their very best on each of the events that we are missing a score from.”

The Solons will return to action Saturday with a 3 p.m. meet against St. Johnsbury at the Central Vermont Gymnastics Academy.