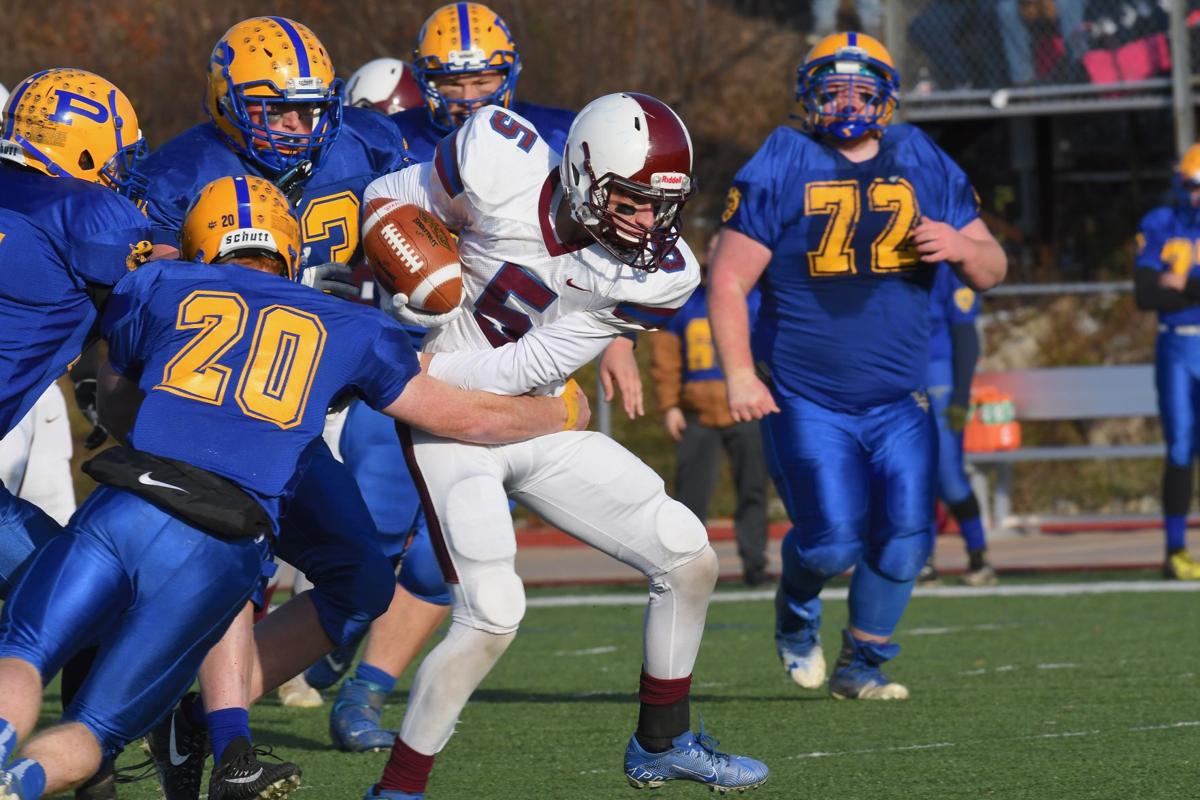 Poultney’s Levi Allen (10) runs with the ball as Ryan Alt (63) blocks from the right during the Division 3 Football Championship Game on Saturday at Rutland High School. 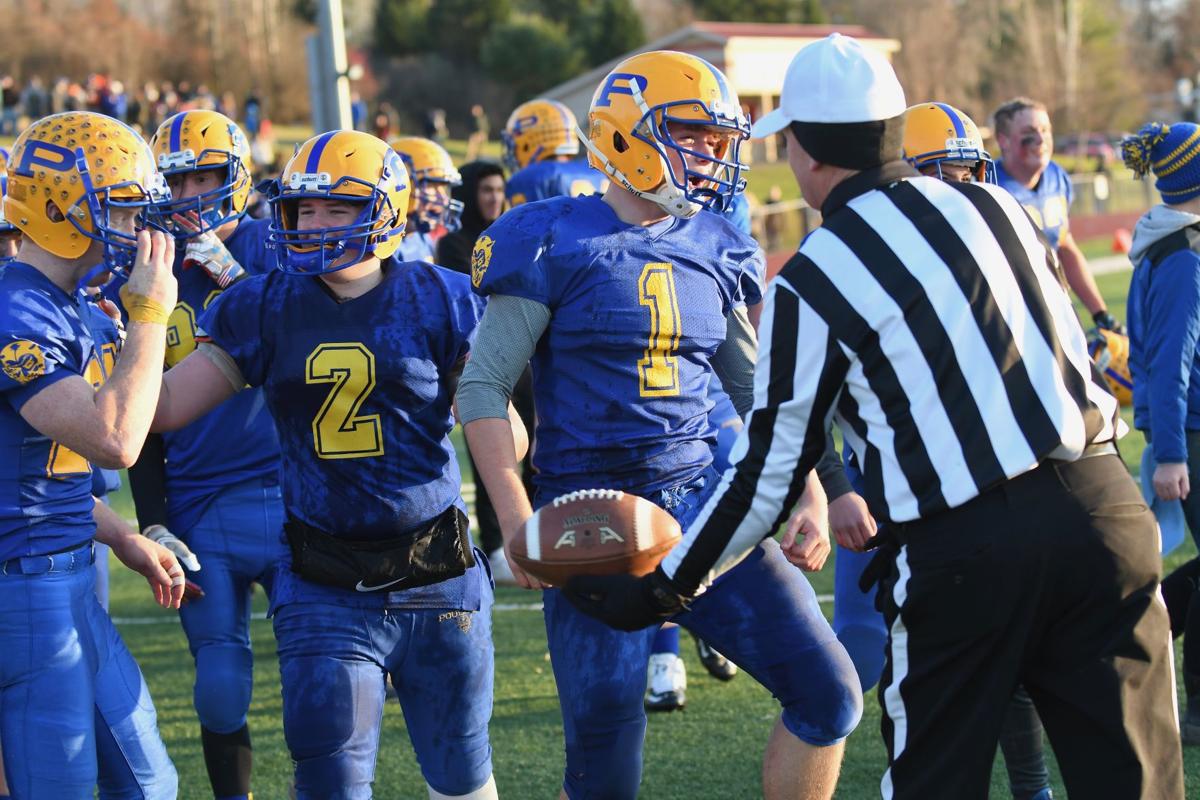 Poultney’s Jesse Combs (1) and Taite Capman (2) congratulate teammates as the Blue Devils celebrate their win over BFA Fairfax in the Division 3 Football Championship Game on Saturday at Rutland High School. 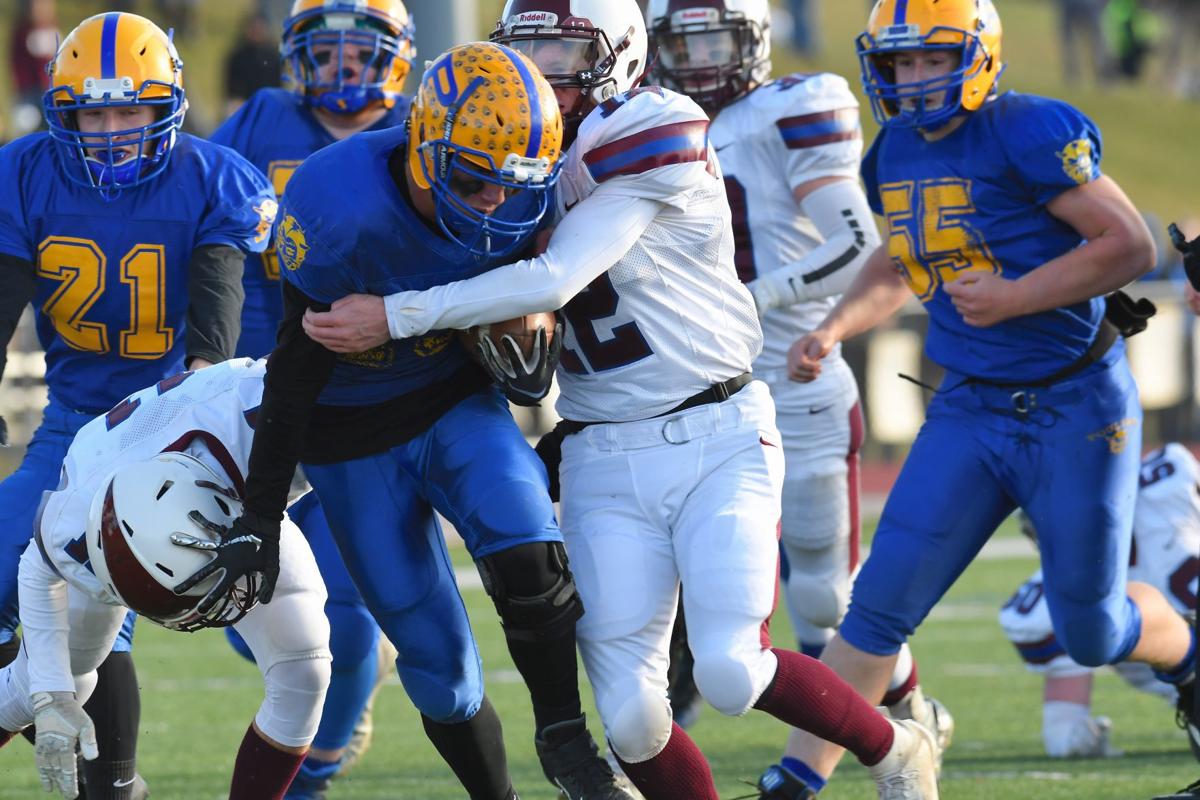 Poultney’s Levi Allen (10) pushes off BFA Fairfax defender Quinn Meunier (11, left) and tries to elude the tackle of William Micuch (12) during the Division 3 Football Championship Game on Saturday at Rutland High School. At left is Poultney’s Lucas Gloss (21) and at right is Jacob DeBonis (55).

Poultney’s Levi Allen (10) runs with the ball as Ryan Alt (63) blocks from the right during the Division 3 Football Championship Game on Saturday at Rutland High School.

Poultney’s Jesse Combs (1) and Taite Capman (2) congratulate teammates as the Blue Devils celebrate their win over BFA Fairfax in the Division 3 Football Championship Game on Saturday at Rutland High School.

Poultney’s Levi Allen (10) pushes off BFA Fairfax defender Quinn Meunier (11, left) and tries to elude the tackle of William Micuch (12) during the Division 3 Football Championship Game on Saturday at Rutland High School. At left is Poultney’s Lucas Gloss (21) and at right is Jacob DeBonis (55).

Injured Levi Allen was a spectator when Poultney lost to Woodstock in the 2018 football finals. On Saturday the junior tailback was right at the heart of it all, recovering two fumbles and rushing for a touchdown in a 17-8 victory over BFA-Fairfax/Lamoille in the Division III championships at Rutland’s Alumni Field.

Allen set up the first touchdown possession with a fumble recovery and then ran it in from the 26 as Poultney got up early and made the Bullets play catch-up.

By the time BFA had its second first down (this on its fourth possession), Poultney had a 14-0 lead.

It was the first championship for Poultney since 2007 and it was even sweeter in that it reversed a 6-0 loss to BFA in Poultney in Week 2.

How did Poultney run the ball so much better?, Allen was asked.

“We knew it was all about physicality and today it was all or nothing,” he said. “Leave nothing in the tank today.”

Quarterback Caden Capman ran for a first-half touchdown and Ryan Alt booted a 29-yard field goal in the third period to make it 17-0 before the Bullets offense final got untracked.

“That’s what we’ve been trying to do all year,” said Capman of making teams play catch-up.

Jaxon Shaarschmidt broke off a 75-yard run to get BFA on the board with 11:07 to play. BFA had one last possession but ate up more than eight minutes on a drive that peaked at the Poultney 5 and ran the clock down inside the final minute.

An apparent touchdown pass from Cam Meunier to Quinn Meunier was called back because the latter stepped out of bounds in the back of the end zone before making the catch.

Cam Meunier then ran 12 yards to set up fourth-and-goal at the 3 but Alt threw Noah Brock for a 2-yard loss on fourth down to virtually end the game.

Alt and the rest of the Devils defense enjoyed a big day. They bashed the Bullets’ bread-and-butter rushing game with 18 tackles for results of 2 positive yards to a loss. Colby Hutchins, Allen and Heith Mason were among others with tackles for losses.

Without Shaarschmidt’s long run, BFA would have had 150 yards. Poultney finished the game with 219 yards.

Shaarschmidt’s TD run woke up BFA but it was far too late.

The second-seeded Bullets finished 9-2. Poultney completed the season with a 10-1 mark and a nine-game win streak.

Allen’s quickness at outside linebacker stung BFA on its first possession as he ran down Cam Meunier, slapped the ball out of his hands and pounced on it at the BFA 29. Two plays later Allen hit the hole fast behind his big line and broke free up the middle and scored. Alt’s extra point made it 7-0 at 6:40 of the first period.

Poultney turned over the ball on downs on its next possession but scored on its third, a 69-yard foray aided by an offsides penalty on fourth and inches near midfield and a facemask at the end of a Capman run.

Capman completed a 23-yard pass to Allen and Allen broke a 19-yard run on the 10-play drive. Allen was determined on Saturday, plowing for many extra-effort yards and once dragging a pile of defenders an additional 7 yards to the delight of Blue Devils fans. His 19-yarder advanced the ball to the 5 and Capman covered the remaining distance with a rugged second-effort carry of his own 5:36 before the half.

Poultney capped its scoring following Allen’s second fumble recovery at the BFA 40, with Capman breaking a 14-yard run before the drive fizzled at the 12. But Alt’s booming field goal attempt was true with 3:51 left in the third period.

Shaarschmidt’s scoring run down the left sideline, followed by his two-point run, was a drastic deviation from the norm. For on BFA’s last possession, the Devils made the Bullets earn every yard while chewing up the clock.

BFA ran 19 plays before finally giving up the ball as the final seconds ticked away on Poultney’s second Vermont state championship since state playoffs began in 1970.