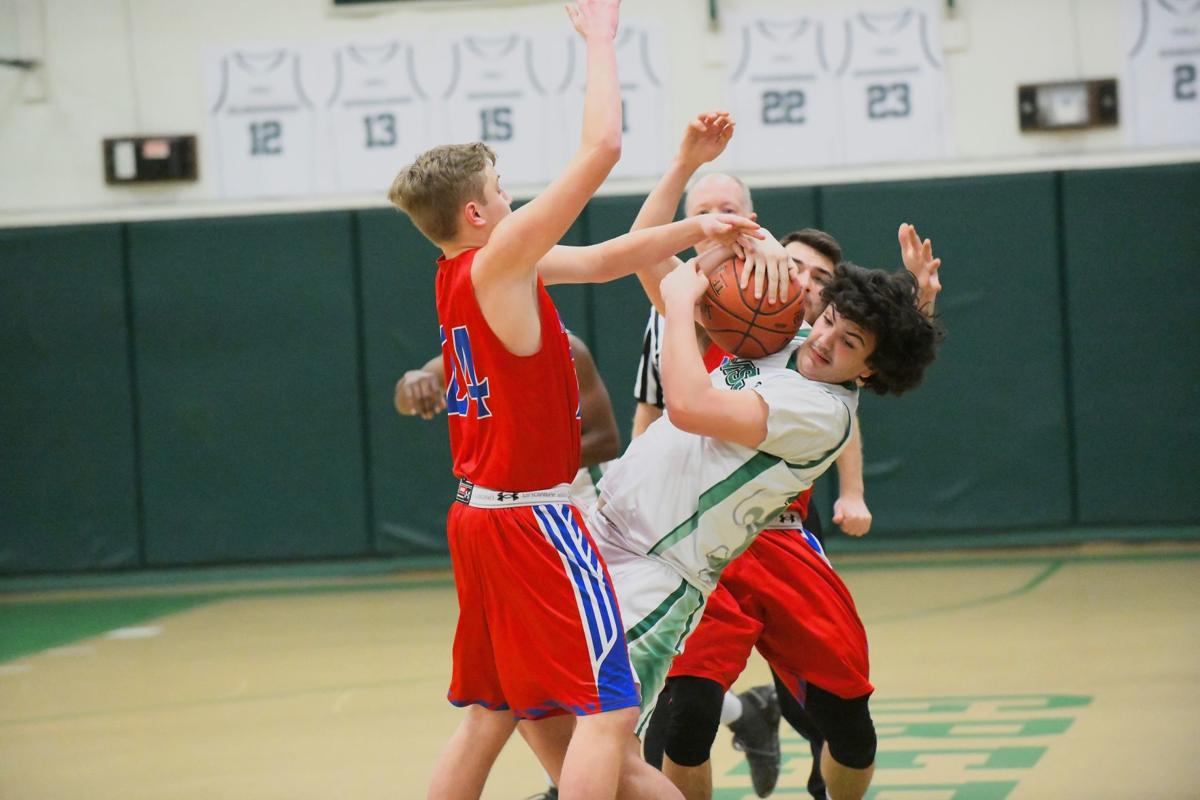 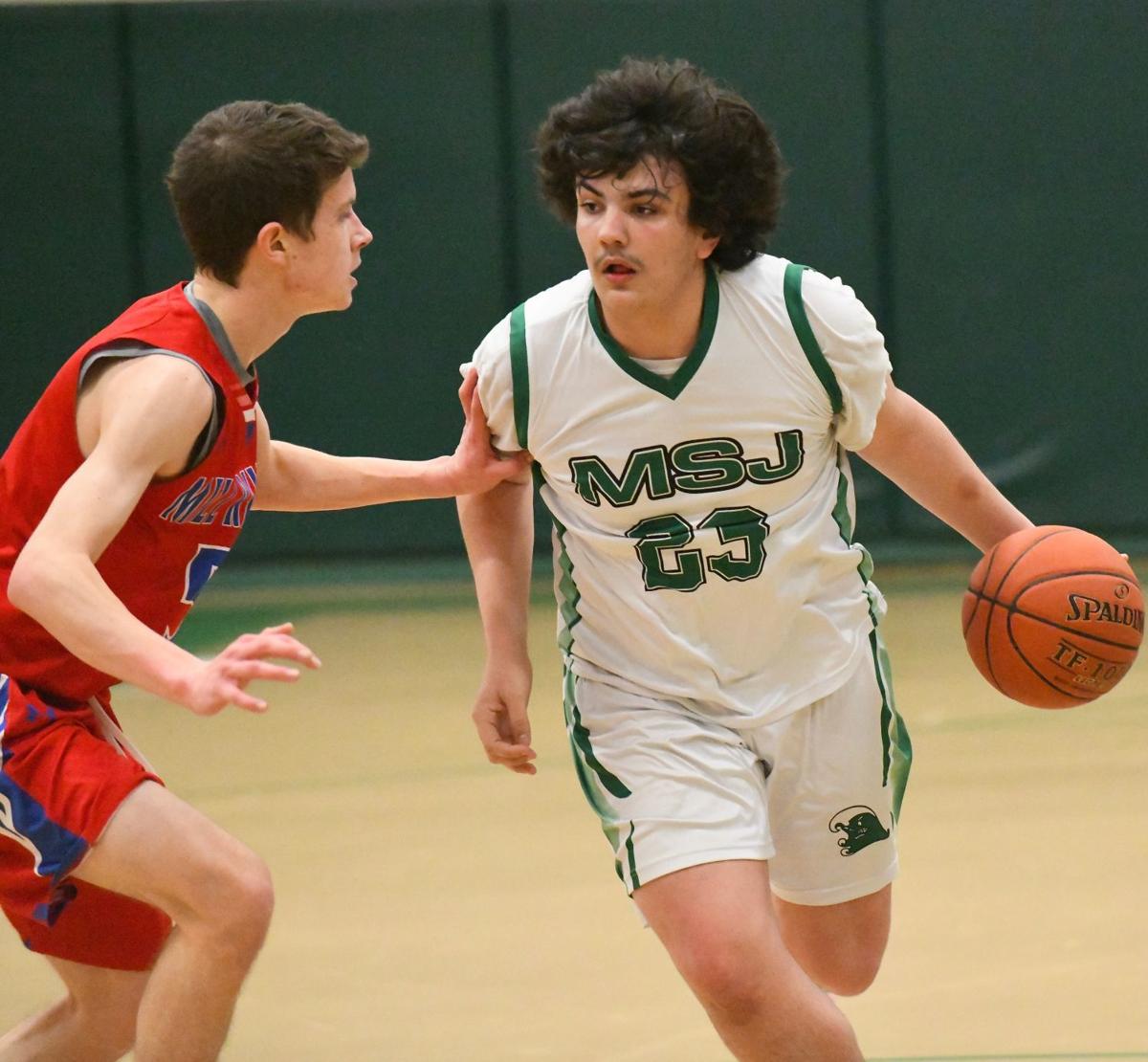 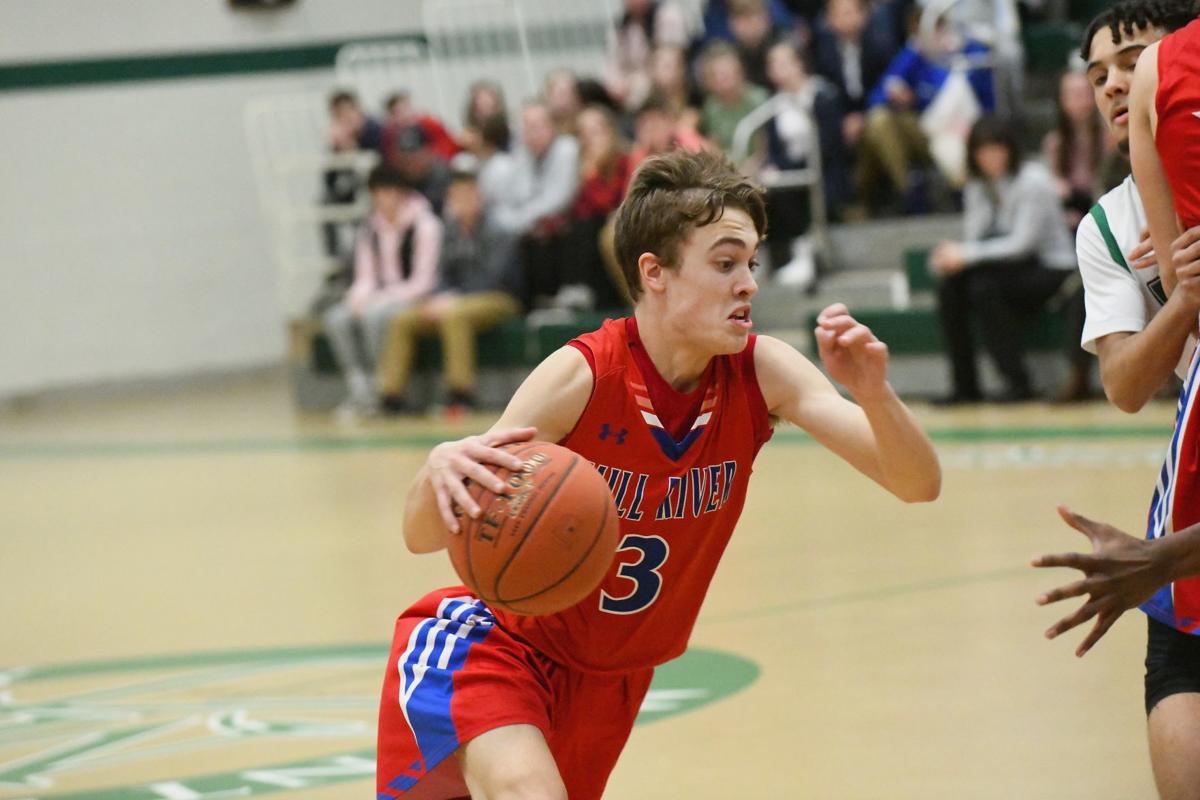 Mill River’s Aidan Botti (3) drives to the net against the MSJ defense during their Tuesday night matchup at MSJ’s Martin McDonough Gymnasium.

Mill River’s Aidan Botti (3) drives to the net against the MSJ defense during their Tuesday night matchup at MSJ’s Martin McDonough Gymnasium.

Tuesday was one of those nights where everything went right for the Mill River boys basketball team.

The senior, who doesn’t get tons of playing time, couldn’t miss in the fourth quarter, something he and his teammates had in common all night long in an 81-47 win against Mount St. Joseph at McDonough Gymnasium.

“(Tristan) is a senior who transferred from Burr and Burton,” said Minutemen coach Jack Rogers. “He had a dozen (points). Maybe I’ve been missing something, but he was on fire.”

Louden had a pair of 3s in the fourth quarter and knocked down all four of his free throws.

His scoring outburst came in a game that was well out of hand when he checked in.

When the teams met last, it was MSJ pulling out an overtime win on Mill River’s home floor.

The Minutemen made sure the sequel had a much different ending.

Mill River came out in a press defense and caused the Mounties into a bunch of early mistakes, with some great traps in the backcourt.

“We got flustered early on. We didn’t expect them to press,” said MSJ coach Chris Charbonneau. “It was really Bill (Carris)’ first time getting pressed this season, so that was a little different. We have to learn that when people press, we’re trying to attack the press, not just break it.”

“We didn’t feel like we put enough pressure on them the first time around,” Rogers said. “We wanted to go after them in the backcourt too. We typically aren’t a team that’s going to chase you all over the floor, but MSJ looked a little shaky early, so we got after it and it resulted in some transition baskets.”

The Minutemen rushed out to a 13-3 lead on the strength of a trio of 3s, coming from their guards Aidan Botti, Tyler Shelvey and Cole Aines.

Mill River led by eight after one quarter and didn’t let up as the game progressed.

Aines kept the same aggressiveness he had in the Minutemen’s upset win against Fair Haven and looked for his offense. After a five-point first quarter, he added six more in the second. Aines attacked the basket and was rewarded with nine first-half free throw attempts.

With an 18-point lead at the half, Mill River continued to widen the gap in the third. MSJ center Dave Mercure found himself in foul trouble, picking up his fourth foul midway through the frame.

The Mounties have guards with size like Cole Blanchard and Keegan Chadburn who can fill the post roles, but with MSJ’s main paint presence on the bench, the Minutemen exploited their edge.

It’s moments like these where the arm injury to 6-foot-5 Jake Williams can really hurt the Mounties.

Mill River center Will Farwell scored eight of his 13 points in the third.

“They have pretty good team size, but without (Jake) Williams and (Dave) Mercure, we’re bigger than them,” Rogers said. “Colby Fox and Will Farwell took advantage of that.”

Maddox Traynor, who has played with Rutland most of the season, was on the MSJ bench in street clothes during Tuesday night’s contest. Traynor was a member of the 2019 Division state championship team.

The Mounties drop to 9-9 and hosts Otter Valley on Tuesday.

The Minutemen improve to 12-4 and need to keep winning if they want to secure a top-four seed in D-II. Currently, Mill River is battling with North Country for the fourth spot in the Vermont Principals’ Association index rankings.

“Scoring got spread around and everyone contributed, it’s tough to find anything wrong with this one,” Rogers said. “We’re feeling good at the right time.”