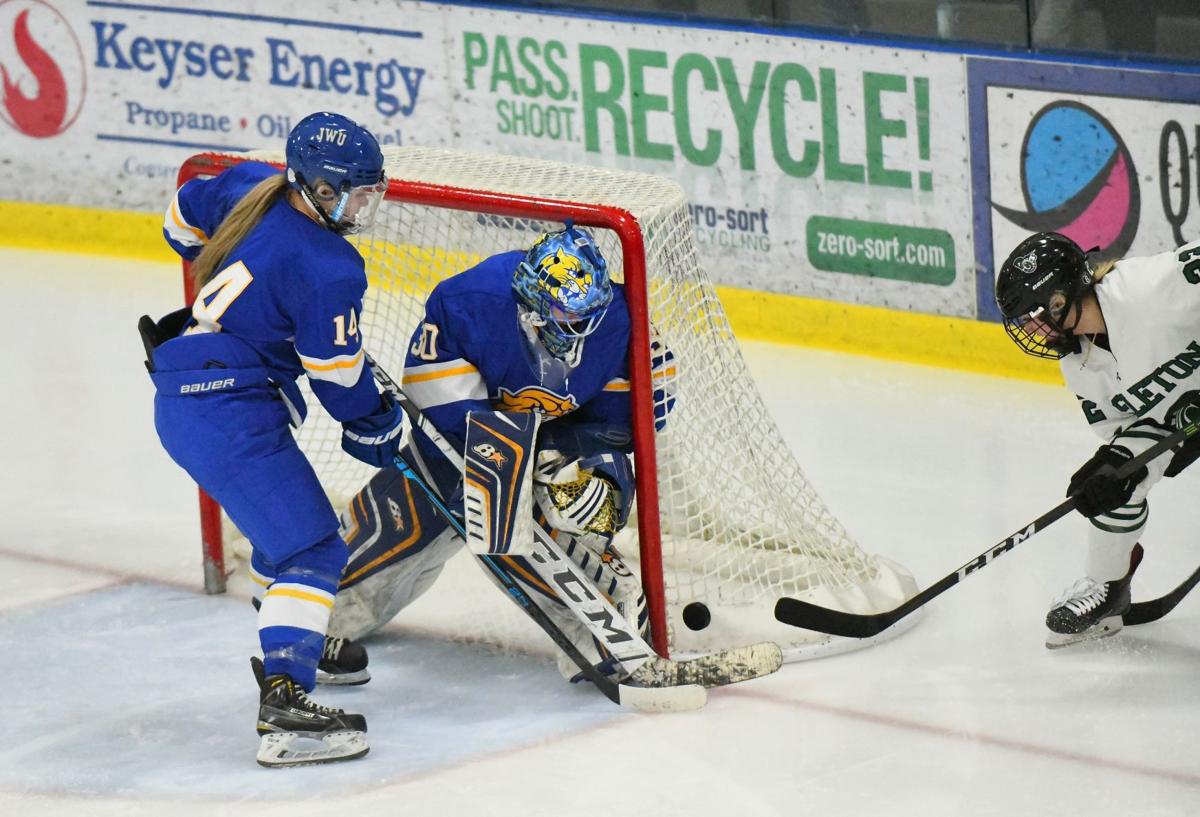 Castleton’s Kaitlin Bardellini (22, right) attempts to get the puck away from Johnson & Wales goalie Jasmine Mucci (30) and Skylar Robert (14, left) on defense during their Friday matchup at Spartan Arena in Rutland Town. 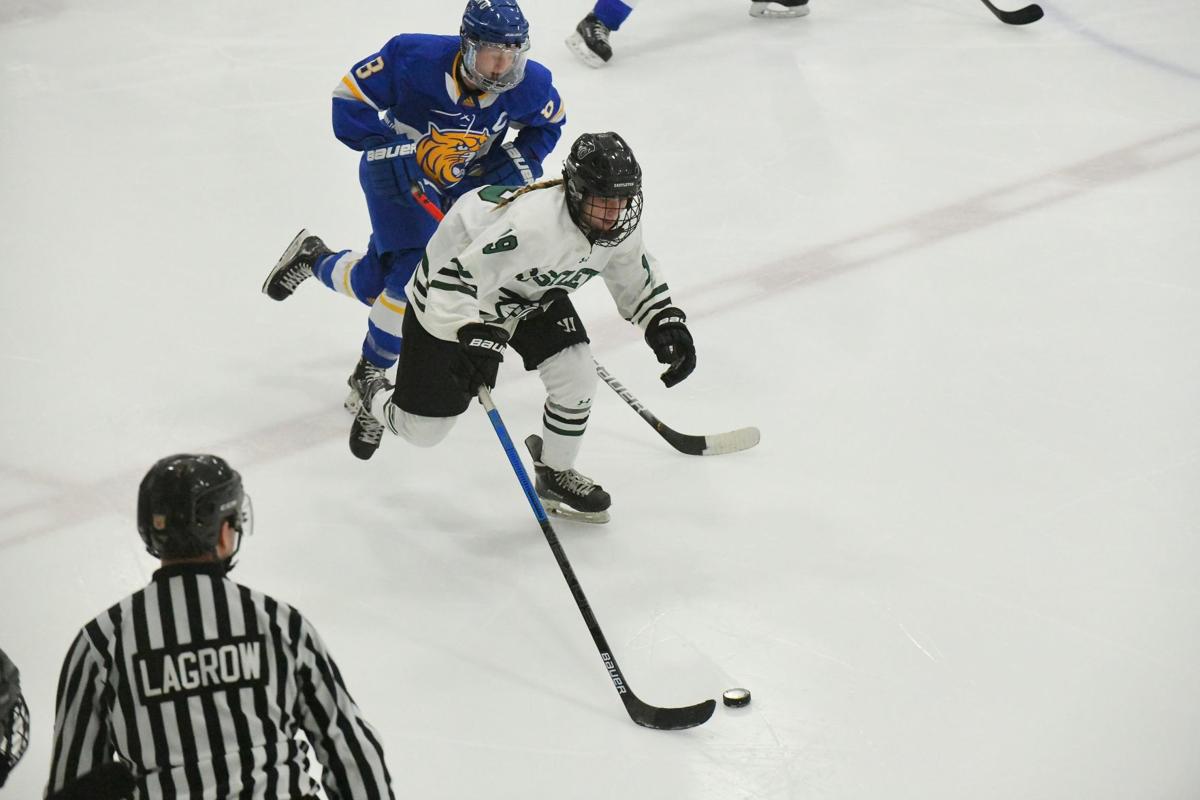 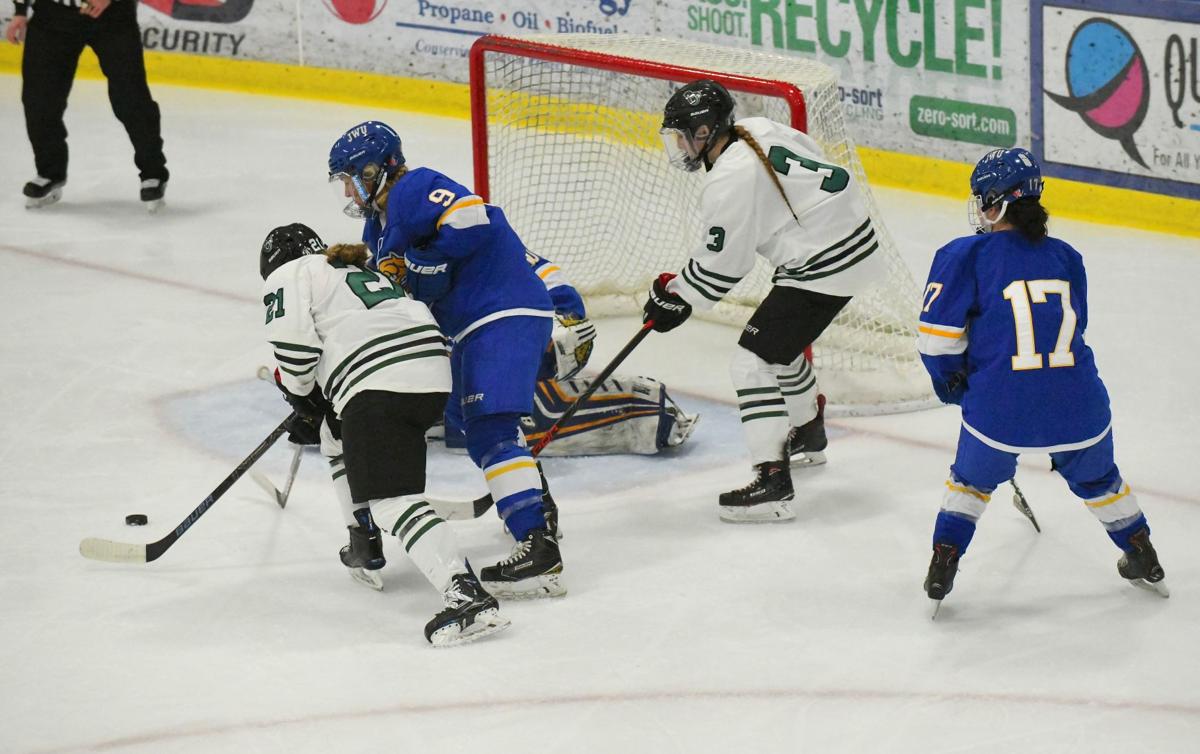 Castleton’s Ali Stevens (21, left) attempts to get the puck in the net with the help of Darby Palisi (3). Johnson & Wales Katarina Diehr (9) and Taylor Davis (17) assist goalie Jasmine Mucci on defense during their Friday matchup at Spartan Arena in Rutland Town.

Castleton’s Kaitlin Bardellini (22, right) attempts to get the puck away from Johnson & Wales goalie Jasmine Mucci (30) and Skylar Robert (14, left) on defense during their Friday matchup at Spartan Arena in Rutland Town.

Castleton’s Ali Stevens (21, left) attempts to get the puck in the net with the help of Darby Palisi (3). Johnson & Wales Katarina Diehr (9) and Taylor Davis (17) assist goalie Jasmine Mucci on defense during their Friday matchup at Spartan Arena in Rutland Town.

Castleton University women’s hockey coach Mike Venezia is a Philly guy and he would have liked to have seen a little more of the Flyers’ Broad Street Bullies mentality from his Spartans in Friday night’s 2-1 loss to Johnson & Wales.

He certainly did not see any of it during a lackluster second period.

The Spartans came out strong and scored at the 17:50 mark of the opening period. Erin Smith got on goalie Jasmine Mucci’s doorstep to score with Darby Palisi and Samantha Munroe earning assists on the play.

The Spartans played well those first 20 minutes, outshooting the Wildcats 12-11 and putting some pretty good pressure on Mucci and her defense.

But the rest of the game, and the second period especially, was another story.

The Spartans were outshot 17-3 in that second stanza.

“The start was great and then we got complacent,” Venezia said.

“We aren’t going to win any hockey games with the way we played in the second period.”

All that sniping by the Wildcats in the second period paid off when J&W’s leading Hannah Tracy drew them even with her 15th goal, Taylor Davis and Kathryn Mason assisting.

Needing a tie to nail down the No. 2 seed in the New England Hockey Conference playoffs, the Spartans couldn’t get it. Cassidy Simanski got the game-winner past goalie Alexis Kalm with 9:02 remaining in the game.

The Spartans pushed for the equalizer. Casey Traill made a strong bid for it with just under two minutes remaining, but the Spartans only had to look back at the second period to see where they lost this one.

There was not a lot Venezia liked about this one, but he could have no complaints about Kalm, the Cadillac of NEFC goaltenders.

That has been the case all season with Kalm raking in five NEHC Goalie of the Week accolades.

It has been a good season for the Spartans who take a 12-9-2 record (9-4-2 in the NEHC) into Saturday’s home game against a struggling Salem State.

But the Spartans had a tough game on the road with Salem, gutting out a one-goal victory back on Nov. 8. And Venezia knows nothing will come easy against anyone if the Spartans don’t play with more consistency.

Johnson & Wales coach Jessica Salisbury was ecstatic with the play of her team and with the way the Wildcats found it within themselves to fight back from that 1-0 deficit despite a short turn-around. They had to play a makeup contest on Wednesday night, a 3-1 victory over Plymouth State.

“We definitely worked hard. It is never for lack of effort with us,” said Salisbury of her team whose record is 8-4-3 in the NWHC and 11-9-4 overall.

“Our focus was just to play hard. I am very excited about what this team can do.”

J&W has the supreme test on Saturday when the Wildcats visit NEHC titan Norwich University. The Cadets defeated UMass Boston 3-1 on Friday to raise their league record to 15-0.

NOTES: Newport’s Skylar Roberts. who played for the Kingdom Blades, is a first-year forward for Johnson & Wales. She was the only Vermonter on either team ... Norwich, 17-4-2, is ranked No. 6 nationally in Division III and Middlebury, 15-2-2, is ranked No. 2 behind No. 1 and 21-1 Plattsburgh State.