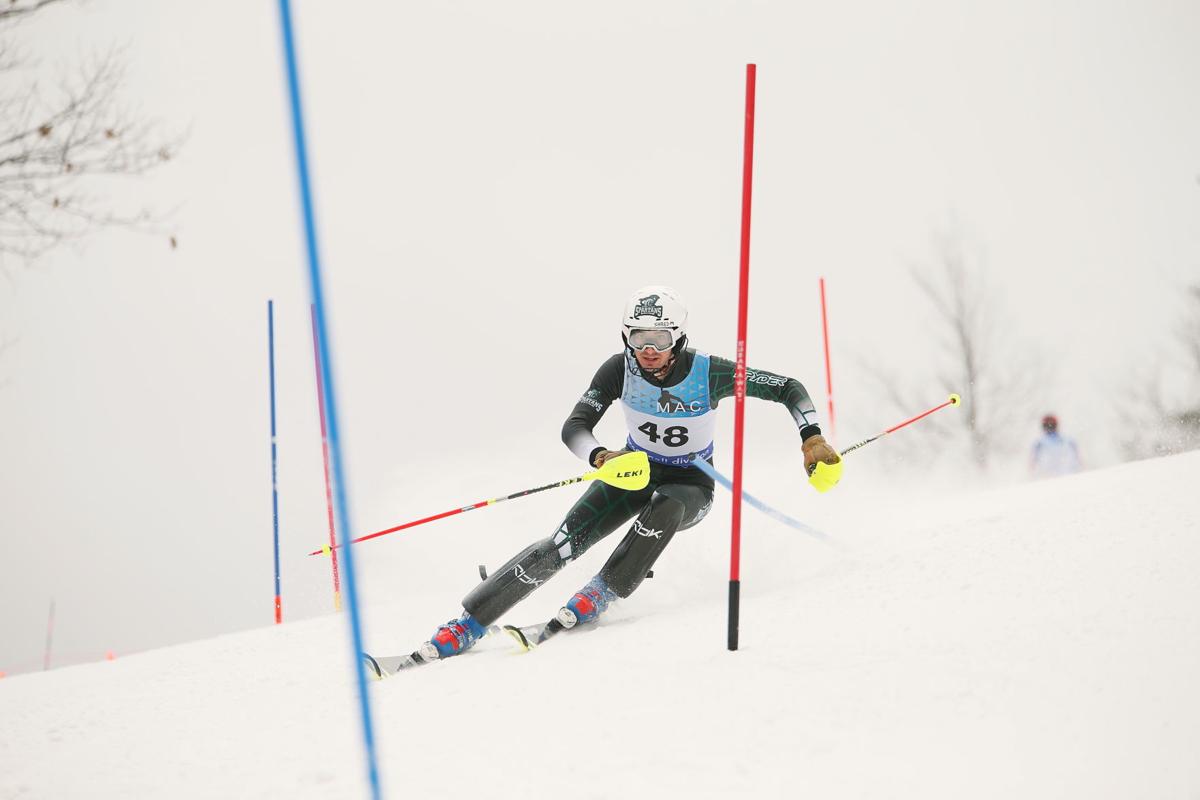 Castleton’s Andrew Borden races down the slopes during a meet this season. 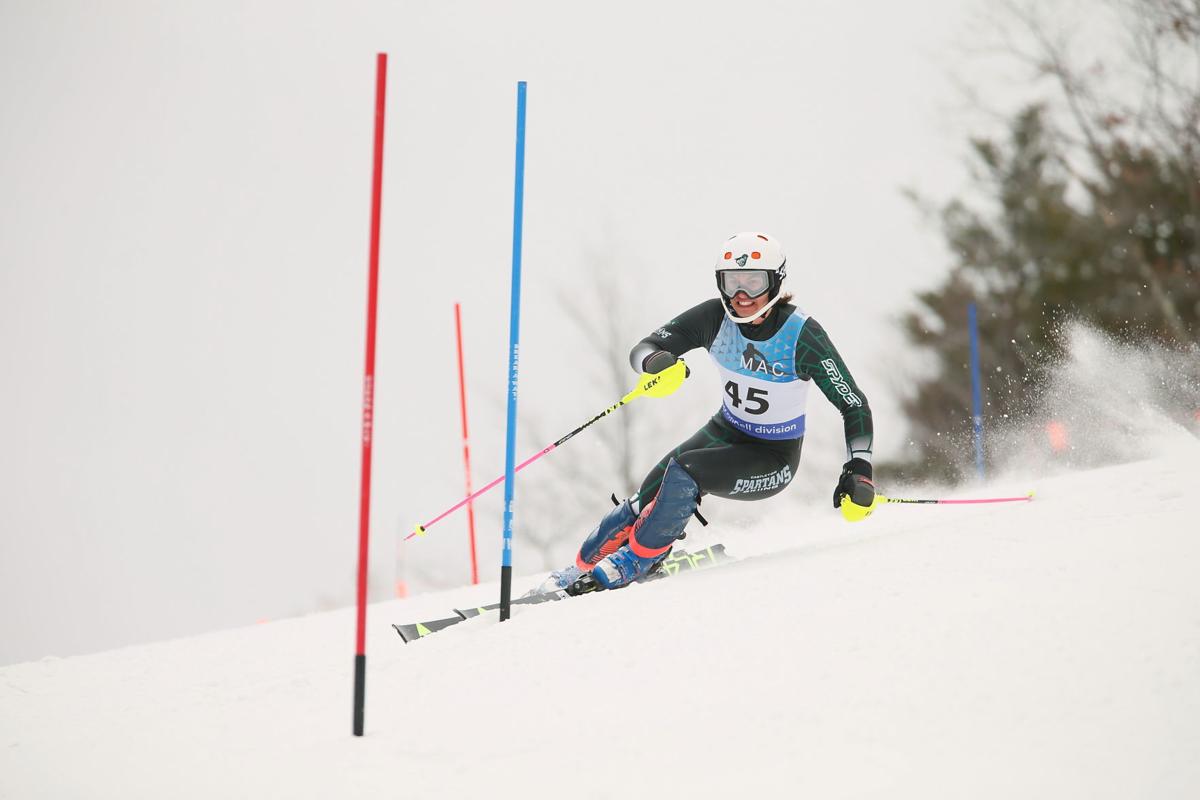 Castleton’s Michael Hirschbuhl races down the slopes during a race this season.

Castleton’s Andrew Borden races down the slopes during a meet this season.

Castleton’s Michael Hirschbuhl races down the slopes during a race this season.

It felt like ski country around Rutland County on Thursday afternoon with a snow squall painting the landscape wedding-gown white in a matter of minutes.

The ski atmosphere was heightened for the Castleton University alpine team. It was riding back to campus from a practice at Pico in the squall and ready to hop on the bus for the ride to Wildcat Mountain in Pinkham Notch, New Hampshire, for the first meet of the year.

It is a homegrown men’s team with eight of the 14 Spartans from Vermont and four of them from the same high school.

This maple-flavored roster is not the one Spartans coach Chris Eder normally has had in his 17 years at the helm.

“It’s unique. If you look at our past rosters, we might have one skier from Vermont,” Eder said.

The change has not come about from any shift in focus in recruiting.

“I think it is more coincidence than anything,” Eder said. “Some of it is word of mouth.”

Borden and Michael Hirschbuhl had a good experience and that didn’t hurt when the younger WUHS skiers were looking at colleges.

Borden and Michael Hirschbuhl, 2016 Woodstock graduates, are seniors. The younger Woodstock products are both sophomores.

Borden is from Pittsfield and cut his skiing teeth on Pico’s trails.

“I spent a lot of time at Pico. The family always skied at Pico. It is small. You really can’t get lost there even at a young age,” Borden said.

“I think it does help that we do train over at Killington and Pico,” Eder said in explaining the Woodstock pipeline.

Rutland’s Cameron Heald is another Spartan growing in the sport on those same slopes. He is a Killington Mountain School graduate.

The Woodstock alumni group feels very much at home when practicing at Pico. They sometimes run into their Woodstock coach Fred Dieffenbach who is there coaching members of the Pico ski club.

Borden’s favorite sport at Castleton is not alpine skiing. He competes in Cyclocross. He showed his mettle in the Collegiate Club Nationals by powering his bike through a muddy course for eighth place among 45 finishers in Louisville.

“Cycling is my favorite. I am at a much higher level in cycling,” Borden said.

“But back country skiing is pretty close to being as much fun as cycling. Alpine skiing definitely helps me at it.”

The other Vermonters on the team are Nathan Bedell and Bennett Coseo, both by way of BFA-St. Albans, and Starksboro’s Robby Kelley.

Comprising the remainder of the roster are Jan Klindic from Croatia, Paul Rechberger of Austria, Alec Larson of Auburn, Maine, Logan Mackie from nearby Warrensburg, New York, Hans Poelmann of Warwick, New York and Neil Sheehan of Westfield, Massachusetts.

Kelley is an interesting story in that he skied for the University of Vermont and comes to Castleton with two years of eligibility remaining. He also was a member of the Castleton football team, playing receiver in his first year of organized football.

“He had a lot of fun and is excited about next season,” Eder said of Kelley’s first football experience.

Kelley is an older nontraditional student. He will turn 30 in May and made his World Cup debut in 2012. He represented the United States in the World Championships in 2013 and 2017.

Thursday afternoon, the Spartans opened their season by finishing first among nine teams in the giant slalom and Kelley took the top spot on the podium with Rechberger finishing second. Mackie placed fourth overall and Klindic and Heald made certain the top 10 was crowded with Spartans.

“The team bonds very well together,” Borden said. “The foreign kids and all the kids get along. We all tell ski stories from the past.”

“All four of the Woodstock kids are solid skiers,” Eder said. “We win and lose as a team.”

Eder believes strongly that every skier on the roster is important to the success.

“Two years ago when our top skiers didn’t do well we salvaged second place because the other guys came through,” Eder said.

“The guys from Woodstock work real hard and they are always on top of things.

“Michelle Podnecky, I guess, is where it started.”

Podnecky is a Woodstock Union High graduate who became a national champion for the Spartans in the skiercross event in 2010 at the United States Ski and Snowboard Association National Championships at Sunday River, Maine.

Podnecky showed her resolve in 2011 when her family was evacuated from their home during Tropical Storm Irene. Unable to get out of Bridgewater by car, she rode her bicycle to the Spartans’ tennis practice at the Grand Slam facility in Rutland.

Neither Eder or Castleton ski coach Rob Purdy were surprised.

They were accustomed to seeing that type of determination out of Podnecky and Eder has seen the trait again in these Woodstock athletes who have followed her.

“It feels like we have 20 coaches. They are always helping each other,” he said. “They study video together. It’s a team sport.”