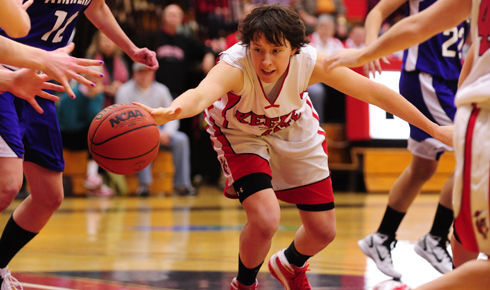 Meghan Farrell tracks down a loose ball during her time at Keene State playing against Amherst College. 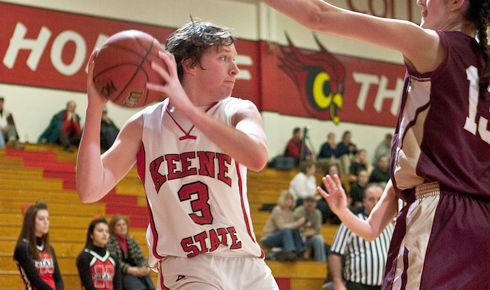 Meghan Farrell looks to make a pass during her time at Keene State, while playing against Rhode Island College.

Meghan Farrell tracks down a loose ball during her time at Keene State playing against Amherst College.

Meghan Farrell looks to make a pass during her time at Keene State, while playing against Rhode Island College.

There is adventure in Meghan Farrell’s bones. That’s what compelled the former Green Mountain Union High School three-sport standout to buy a dilapidated old van after college and strike out for the West.

First, she made herself some other experiences including playing basketball for Keene State while majoring in Exercise Science.

“She is one of the best kids I’ve ever coached,” Keene State coach Keith Boucher said of his team captain.

She hung around for a year or so after graduating from Keene, working as an assistant recreation director in Ludlow and helping her father Terry Farrell coach basketball at Green Mountain.

Coaching with her father was a rewarding experience.

There were aspects to coaching she relished.

“I loved breaking things down, getting the players to see their three options with a screen,” Meghan said.

Life was good but there was the unknown beyond the confines of this little state and she had to know what it was about.

“She said she had to explore the country and she bought that beat-up old van,” Boucher said.

The hunt for the vehicle was on and it would take a lot of looking on her limited budget.

“My budget was whatever I got for my car,” Farrell said.

She looked and looked. Finally, she found the van she could afford that was reliable, not far over the New York state border.

Bozeman, Montana was on her itinerary. It’s a college town and she had friends there from Green Mountain.

Her friends tried to get her to stay but, no, she was off on this great adventure and Jackson Hole, Wyoming was calling. She did not want to have boundaries placed on her, limiting the places she had to see.

“This was the first time I was doing something for myself,” Farrell said.

She left Jackson Hole for Colorado but returned to Jackson Hole. She began working with the high school basketball team in Jackson Hole and that is when she met a freshman post player by the name of Grace Turner.

“I took a liking to Grace. She was such a good kid. She was really coachable; sweet but hard working,” Farrell said.

Today, Turner is a first-year player on the Castleton University women’s basketball team.

Farrell was a guard but had a little experience with inside play at Green Mountain. She helped Turner with some post moves but mainly worked with her on ball handling.

“I knew she would need that at the next level,” Farrell said.

Farrell never dreamed that someday Turner would travel the 2,246 miles from Jackson to Castleton to play in the same league that Keene State calls home, the Little East Conference.

Neither did Turner. She had never heard of Castleton University at that time.

But two Castleton students had worked on Turner’s family ranch in Wyoming a couple of summers and filled her in on Castleton.

Being on a high school basketball staff was very different for Farrell.

Her father came out for a visit and she told him that he had come at the right time, for the team’s closest away contest, only 11/2 hours travel time. The average time to get to an away game is four hours.

“Wyoming is a different landscape. Sometimes we were playing on Indian reservations,” Farrell said.

Now, Farrell is in Denver, applying her Exercise Science degree but not exactly in the way she envisioned.

She is involved with META MVMT, an approach that focuses on different areas with an equal weight given to each: Strength training, meditation, less pain, alignment, injury prevention, movement and breath.

She works with people at each end of the spectrum, from professional athletes (mostly Denver Broncos) to a 75-year-old unable to drive prior to using the program.

She has seen a lot since she jumped in that van and headed out of Chester for Big Sky country. She has run a clinic with former UCLA and NBA great Bill Walton, done some coaching and worked with everyone from weekend warriors to pro athletes on getting the most from their bodies.

Her interest in the science behind META MVMT and her energy in delving into it to learn all that she can does not surprise Boucher.

“After practice, she would say to me, ‘Can we go into the conference room and go over some Xs and Os,” Boucher said. “She would have a couple of notebooks and begin taking notes.”

She is a student of anything she perceives to be worthwhile whether it be in the field of exercise science or on the basketball floor.

The chances that she might some day gravitate back toward coaching?

“It is not on my radar at the moment. I am so into what I am doing, but I could totally see me doing that again someday,” Farrell said.

Whether she is coaching athletes on fundamentals or helping them to grasp the “A, B, Cs” of working with their bodies, Farrell cares about her players and clients.

When she got off the phone for an interview on Thursday, her next call was going to be to Grace Turner to see how she was doing.

“She’s not only going clear across the country to be on a new team but she is doing it during a pandemic,” Farrell said.

It is about the whole person for Meghan Farrell.