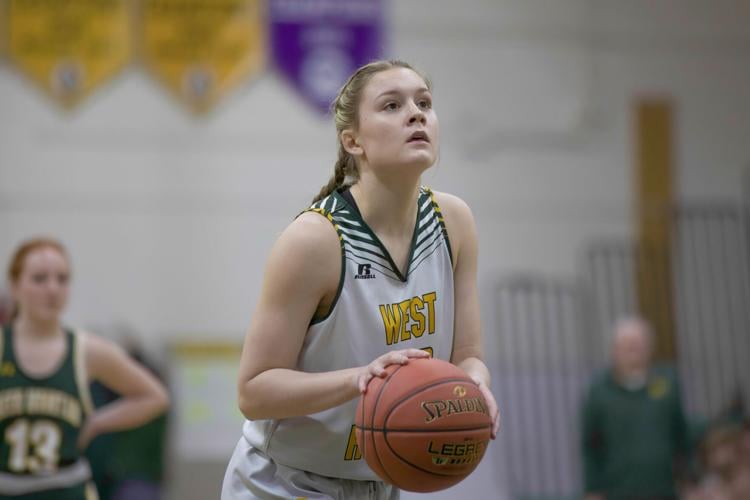 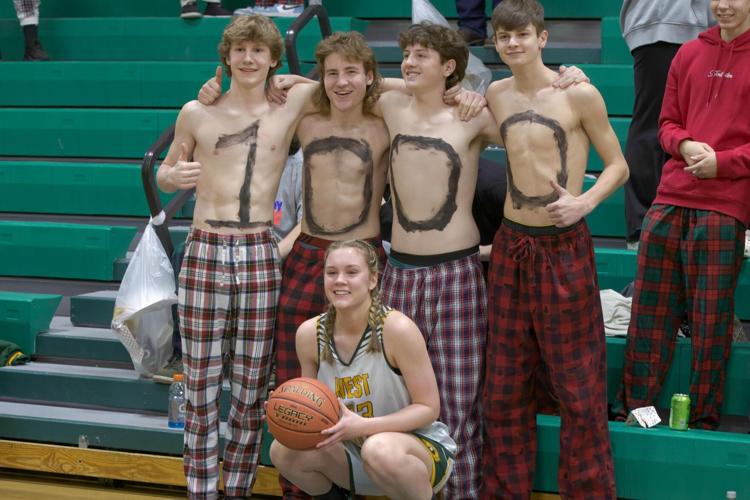 West Rutland sophomore Peyton Guay takes a photo with students after scoring the 1,000th point of her high school career on Saturday against Green Mountain. 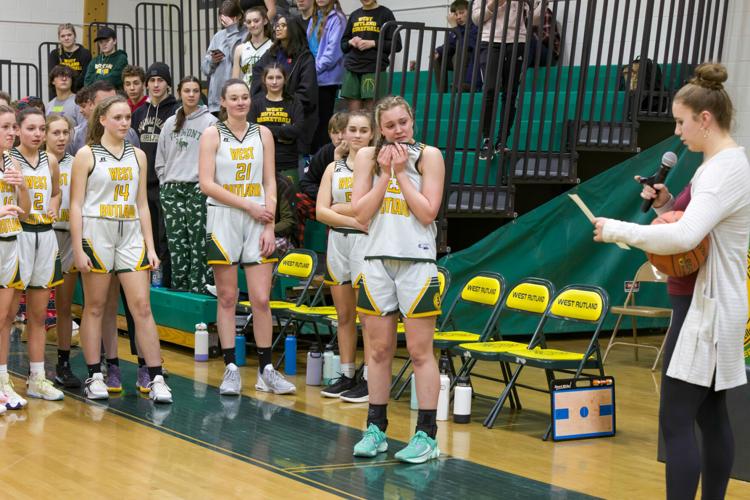 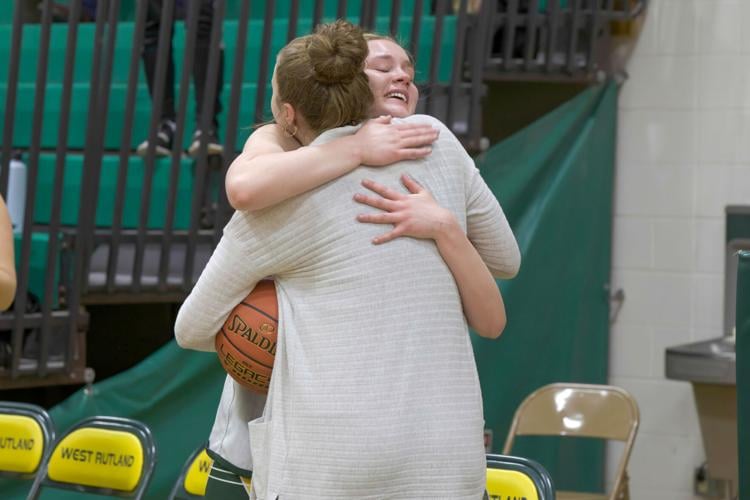 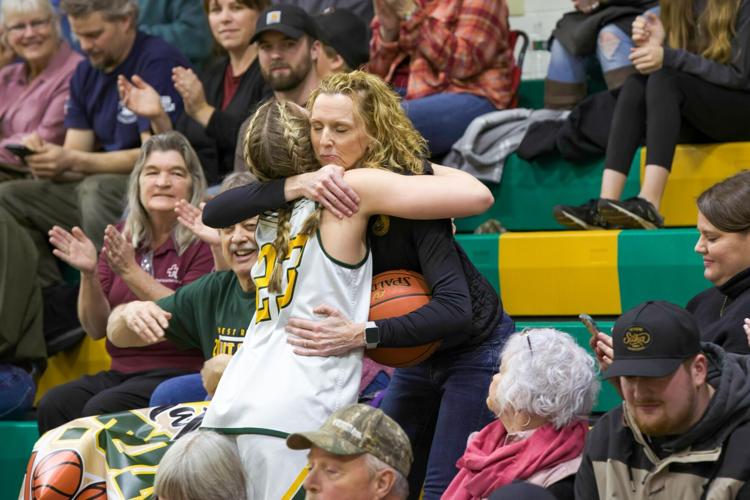 West Rutland sophomore Peyton Guay (23) goes to the stands and hugs her mother, Melissa, after receiving her 1,000 point game ball on Saturday. 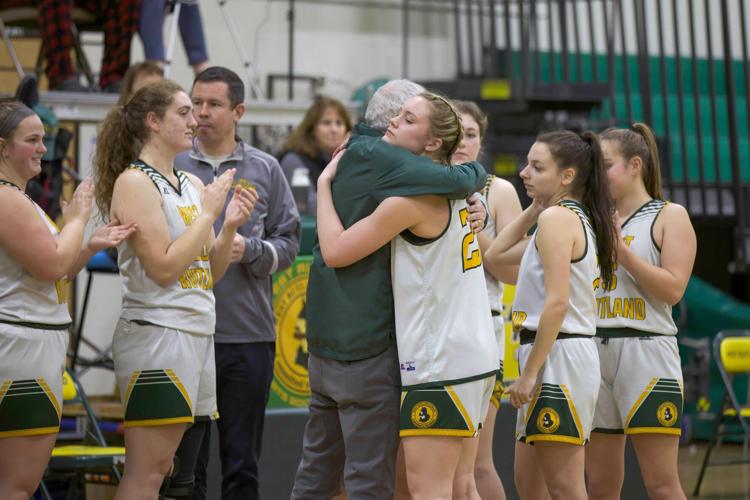 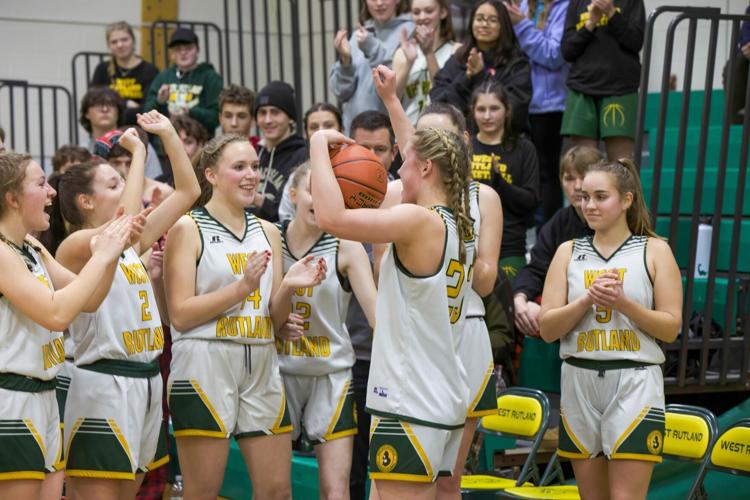 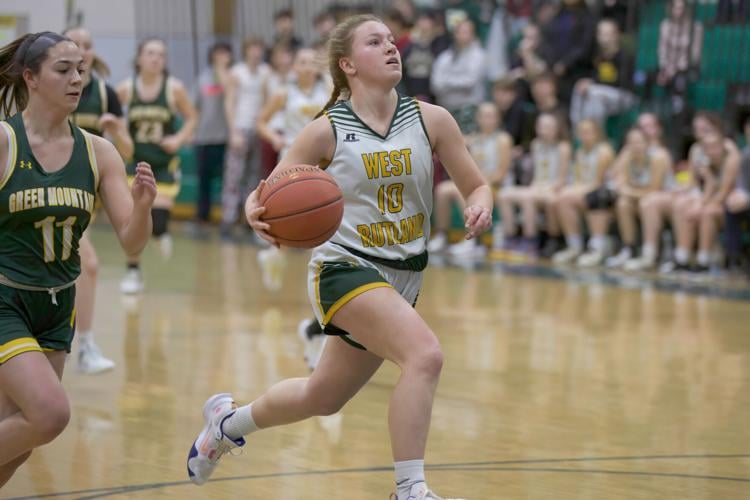 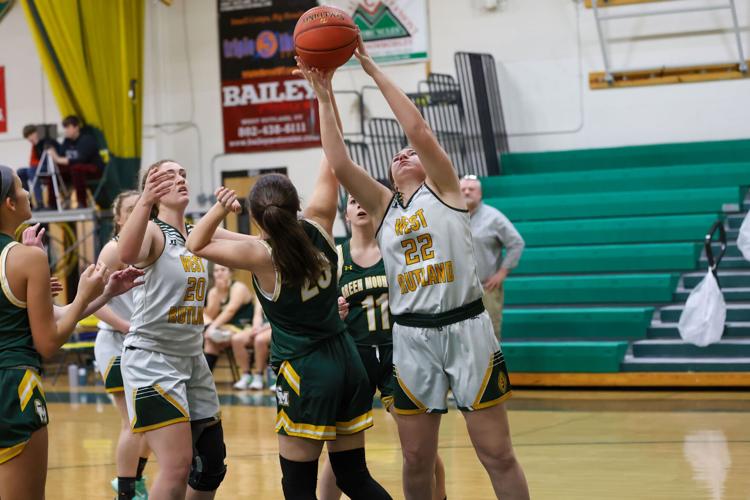 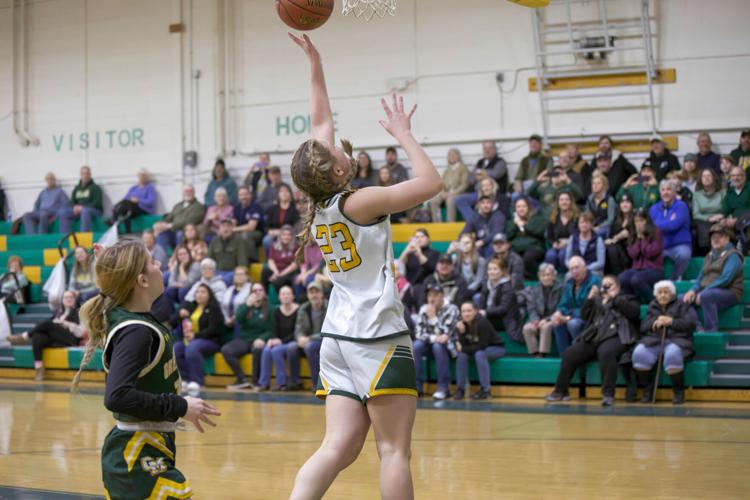 West Rutland’s Peyton Guay goes up for a layup on a basket that would give her 1,000 points for her high school career on Saturday against Green Mountain. 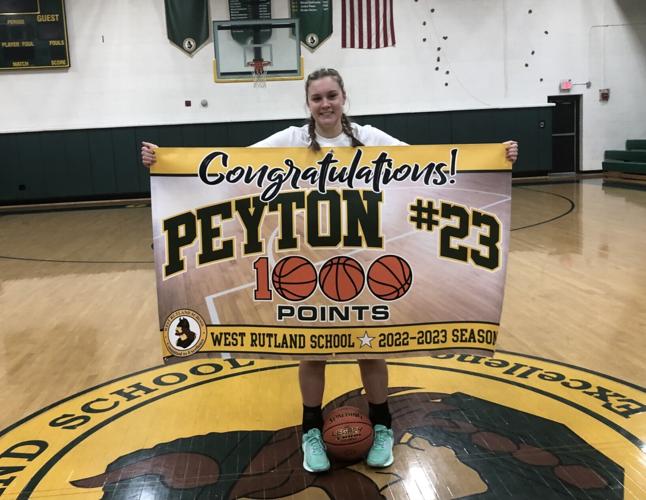 West Rutland sophomore Peyton Guay takes a photo with students after scoring the 1,000th point of her high school career on Saturday against Green Mountain.

West Rutland sophomore Peyton Guay (23) goes to the stands and hugs her mother, Melissa, after receiving her 1,000 point game ball on Saturday.

West Rutland’s Peyton Guay goes up for a layup on a basket that would give her 1,000 points for her high school career on Saturday against Green Mountain.

WEST RUTLAND — You can paint Saturday at the Hinchey Gym green, gold and shades of Guay.

Guay, who needed 28 points entering the game, stole the ball and converted a layup to beat the third quarter buzzer for her 1,001st career points. She finished with 34 points.

Athletic Director Joe Harrington got in touch with Raiche about a week before the game to ask her to present the game ball to Guay when the big moment arrived.

“That meant the world to me,” Guay said. “Brooke has been such a role model for me in high school and college.”

Raiche was a 1,000-point scorer at West Rutland and Castleton University.

Guay said she would go to watch Raiche’s game at Castleton or view them online.

Guay, also a standout on the soccer pitch and softball diamond for the Golden Horde, said that basketball has always been her favorite sport.

She credited all of her teammates and said that Kennah Wright-Chapman and Aubrey Beaulieu have been particularly adapt at feeding her the ball while in scoring position.

Raiche reached the milestone while only a junior but Guay is the earliest to the mark as a sophomore.

“I started playing basketball about as soon as I could walk,” Guay said, noting there is a hoop in the driveway that got plenty of use.

“This is a wonderful opportunity. She has worked so hard,” said Guay’s grandmother Chick Barber.

Guay said when she woke up on Saturday morning, it was with a mix of excitement and nervousness but “more excitement.”

Green Mountain coach Jeff Buffum called Guay “one of those players who comes along every 20 to 30 years.”

She got an early start on the assault of the milestone by scoring 17 points in the first quarter, West Rutland leading 27-3 after the period.

The Horde scored the first 27 points of the game before GM’s outstanding eighth grader Callie Spaulding broke her team’s drought with a 3-point field goal.

The Horde stretched the halftime lead to 45-5.

Green Mountain, to its credit, came out and won the third quarter 9-6 and played far better throughout the second half.

“They kept battling,” Buffum said of his team. “That team would beat anyone in Division III.”

The Golden Horde is the defending Division IV state champion.

Guay had four 3-point field goals for her 34-point output. Following her in scoring for the Horde was Bella Coombs with 11 and Wright-Chapman with eight.

Many teams get out of sync when a player is trying to reach such a milestone but the Golden Horde stayed with the plan.

It was very evident that Guay meant every word about following Raiche while she was growing up and emulating her. Guay was extremely emotional while Raiche spoke about her during the presentation of the game ball.

“I know you worked hard for this,” said Raiche as part of a lengthy and eloquent speech.

Guay came out of the game with 1:34 remaining to warm applause by the fans.

The Golden Horde hikes their record to 12-0 and has a marquee game on Tuesday with 10-1 Leland & Gray coming into Hinchey Gymnasium.

Green Mountain dips to 5-7 and will be at Arlington on Tuesday.

Fans and family lingered long after the game for photos with Guay.

Guay even took one herself of four male students with “1000” spelled out on their stomachs.

It was one of those special moments that brings a school and a community together.

The late Mr. Frank Hinchey would have loved what happened in his house on Saturday afternoon.