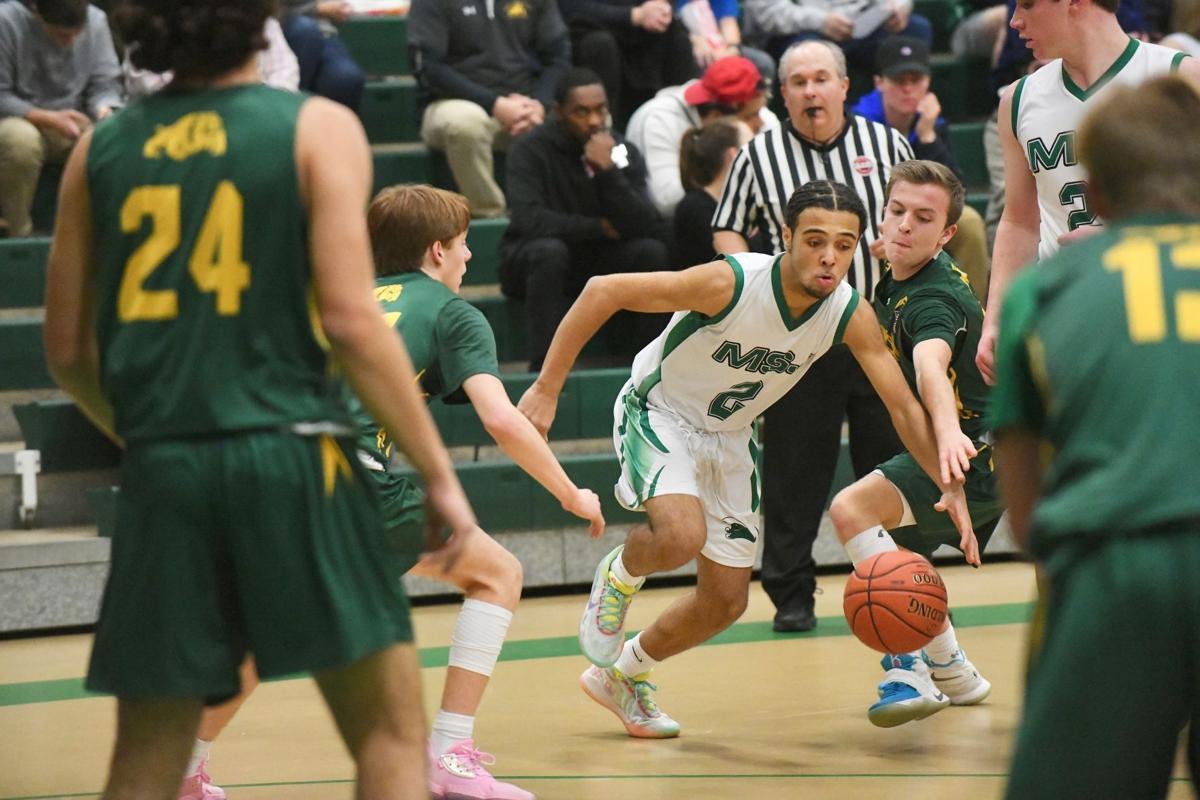 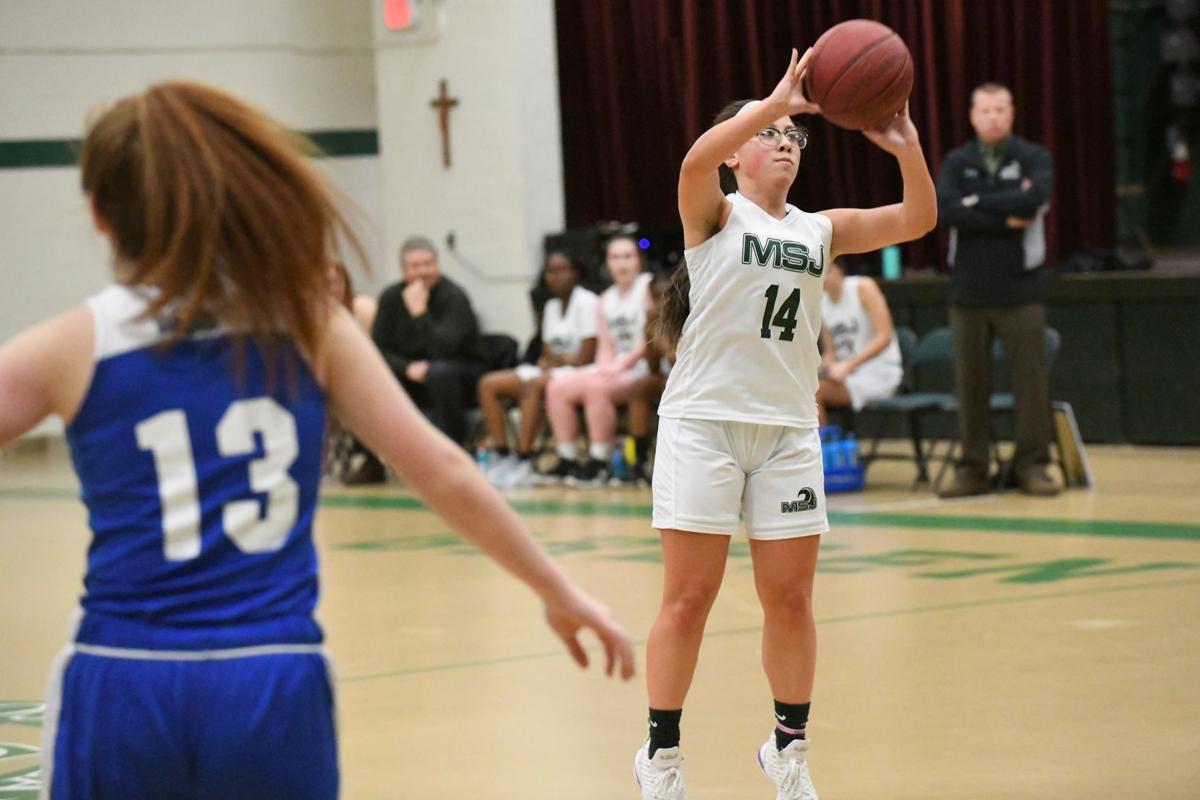 There were plenty of people kicking the year 2020 in the butt as it went out the door.

Mount St. Joseph basketball coaches Chris Charbonneau and Bill Bruso believe their teams have a much better look than the 2020 editions of Mountie basketball.

“We are more athletic than we were last year. We have got some length and some athleticism all at the same time,” MSJ girls coach Bruso said.

Charbonneau also believes his Mounties are much better a year later.

GIRLSThe Mounties not only have length and athleticism, they boast experience. Ella Paquin, Jillian Perry, Ellie Tracy, Tiana Gallipo, Meghan Cole and Cindy Carranza all return with an appreciable number of varsity minutes behind them.

Paquin and Perry are the only seniors.

Carranza is the lone sophomore and freshmen Emma Blodorn, Haylee Rovers, Elizabeth Williams and Sara Schmelzenbach round out the roster.

The Blodorn sisters gave Lori Patterson’s MSJ soccer team a huge lift after transferring from Woodstock. They have not played nearly as much basketball but the same athleticism that they displayed on the soccer field has Bruso excited.

He sees the sisters and Alf in the same category — players who haven’t been on the basketball court a lot but who have a wealth of athleticism that gives them potential.

“They are fast, athletic and they want to learn. They are so coachable,” Bruso said.

Bishop was not with the Mounties last season because she was in South Carolina.

Bruso views her move back to Vermont as a windfall.

“She was on the JV team in South Carolina where she got a lot of time,” he said.

The Mounties boast players who have to regarded as a 3-point threat. Gallipo, Cole, Perry and Bishop can all stick the shot from behind the arc.

Gallipo is lightning quick and aggressive, qualities that make her a game-changing defender.

There is some height that will allow the Mounties to win their share of battles in rebounding the ball and there are the shooters.

That said, the Mounties will have to win games at the other end of the floor, said Bruso.

“I think it is going to be about the defense,” he said.

A highlight of the COVID influenced schedule is the renewal of the city rivalry with Division I Rutland.

“We haven’t played Rutland in over a decade,” Bruso said.

Otter Valley is also on the schedule, an opponent the Mounties have not seen in a number of years.

BOYSCharbonneau is planning on carrying nine players on the varsity and six are seniors. You can already count experience, savvy and leadership among the Mounties’ ingredients.

The other three are juniors and they bring size and ball handling to the package.

The size comes in the form of 6-foot-6 Jacob Williams and Peter Carlson who is nearly as tall.

The ball handling and outside shooting comes courtesy of Andre Prunty.

Traynor is a floor general, accurate 3-point shooter and a savvy distributor. He sitting somewhere around 800 career points.

“Maddox brings a lot of leadership. The kids look up to him,” Charbonneau said.

“The thing that he does not get enough credit for is that he makes a lot of plays for his teammates,” Charbonneau said.

Prunty made the Vermont Basketball Coaches Association’s Dream Dozen and Charbonneau is expecting a big year from him after having an outstanding sophomore season.

“He is expecting a big year out of himself,” the MSJ coach said.

Green can shoot and handle the ball.

“We might do a lot of point guard by committee,” said Charbonneau including Traynor, Prunty and Green as the committee.

Williams will be counted on to snare a lot of the rebounds.

“He will make a big difference on the boards. We call him Godzilla,” Charbonneau said.

“He struggled with his free throws last year but he has put in a lot of time and gotten a lot better.”

Charbonneau leaves no doubt about how important he believes Williams is to the Mounties’ success.

Charbonneau is expecting some good defense from Chadburn and is looking to play him a little bit more inside this season.

“He can also step out and shoot the 3,” Charbonneau said.

Carlson, a big, athletic post player, can give Williams a breather or spell in the event of foul trouble.

Charbonneau sees Fair Haven as a threat to repeat in Division II.

“Not many teams have three good guards like they do,” he said.

He also believes rivals Montpelier and U-32 will be in the line of contenders and he points to Otter Valley and Milton as teams that can’t be discounted.

He puts his own team in that club. He feels this edition of MSJ basketball has what it takes to make a run at the Final Four at Barre Auditorium.

That is a team that bagged the state title. Things might get pretty exciting over the next several weeks down on Convent Avenue.