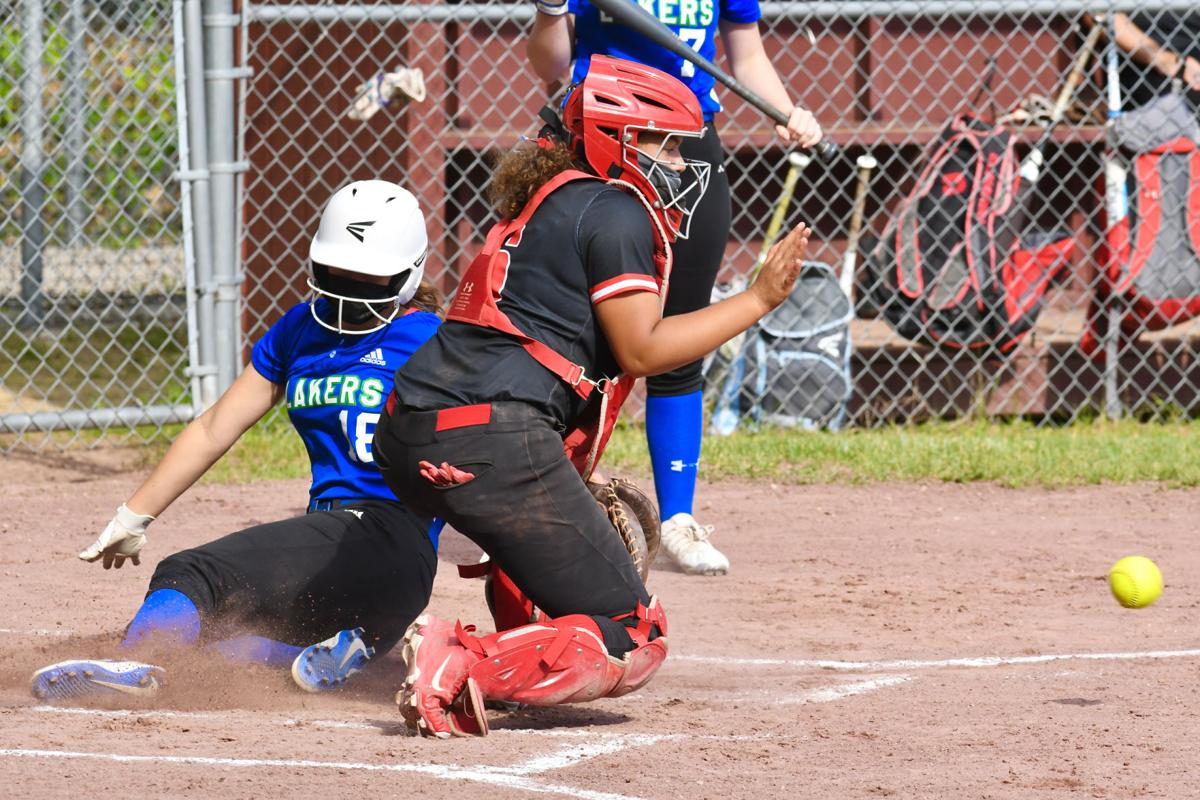 Rutland catcher Samera Rideout (6) fields a throw to home plate as Colchester’s Ava Robare makes it safe for a run during their game at Northeast School on Tuesday afternoon. 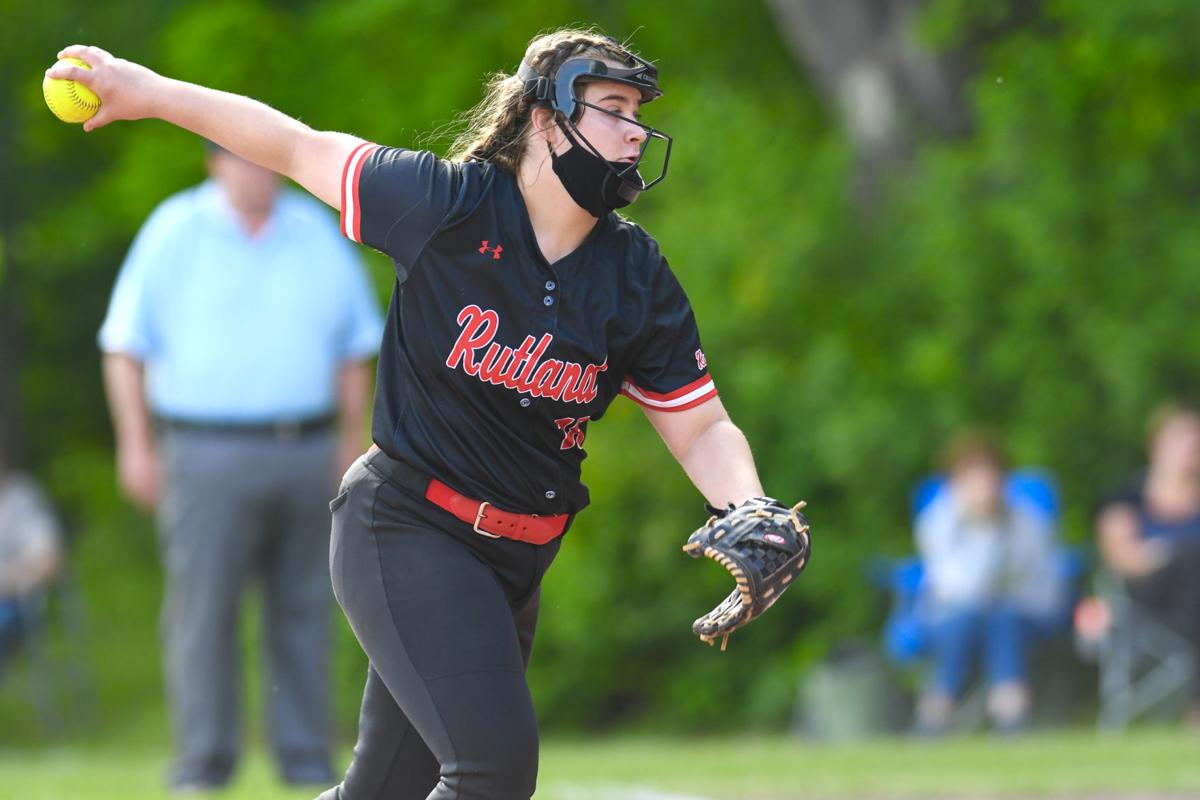 Rutland pitcher Kayla Olszewski (18) winds up for a pitch during their game against Colchester at Northeast School on Tuesday afternoon. 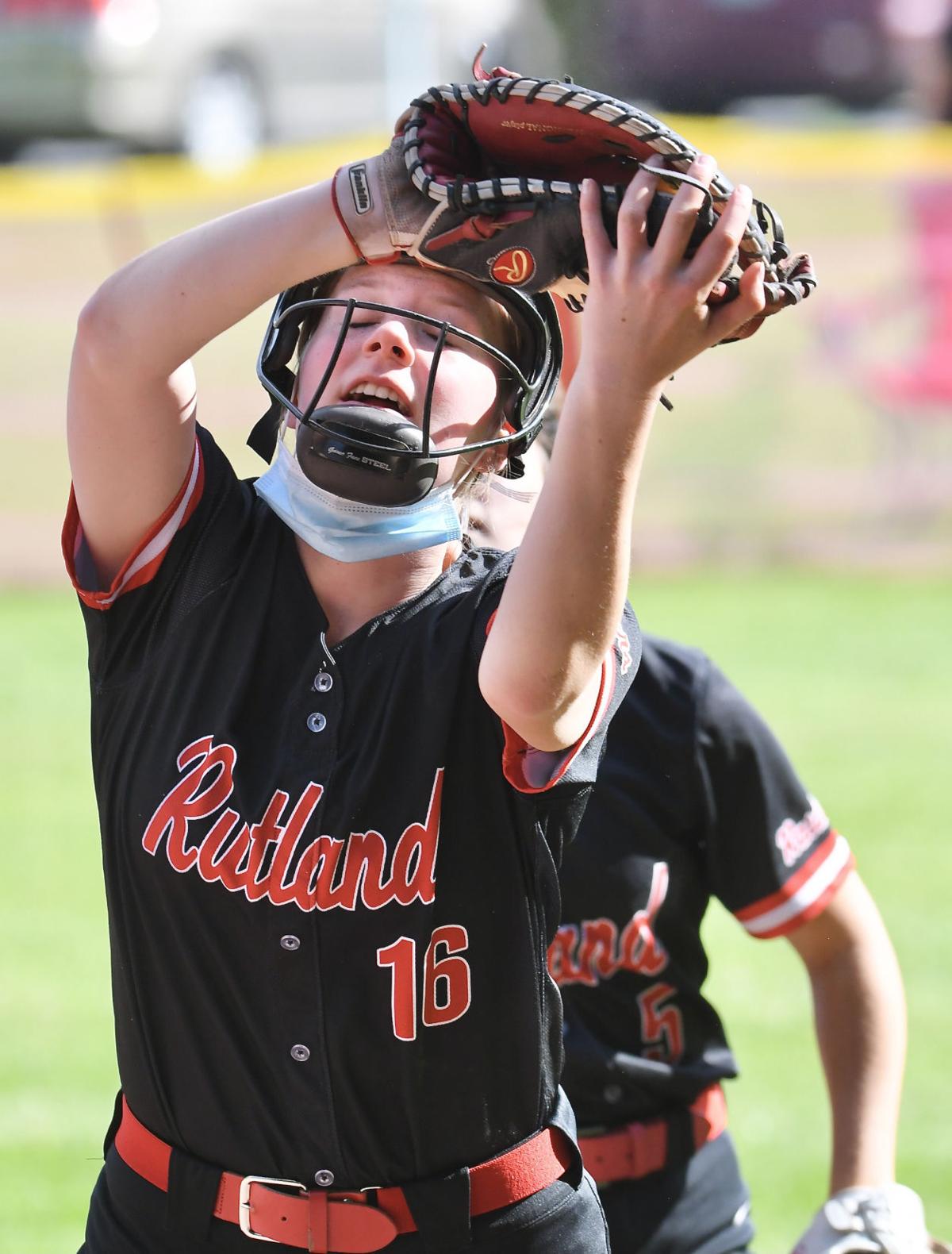 Rutland first baseman Tamara Sabotka (16) holds on tightly to a caught fly ball during their game against Colchester at Northeast School on Tuesday afternoon.

Rutland catcher Samera Rideout (6) fields a throw to home plate as Colchester’s Ava Robare makes it safe for a run during their game at Northeast School on Tuesday afternoon.

Rutland pitcher Kayla Olszewski (18) winds up for a pitch during their game against Colchester at Northeast School on Tuesday afternoon.

Rutland first baseman Tamara Sabotka (16) holds on tightly to a caught fly ball during their game against Colchester at Northeast School on Tuesday afternoon.

The No. 8 seed Rutland softball team had spurts of strong play in its Division I playdown against No. 9 Colchester, but the Ravens couldn’t sustain it, falling 8-3 at Northeast Field Tuesday afternoon.

Rutland strung multiple hits together in four different innings, but the Lakers had a bit more offensive juice to get over the top.

The Ravens were reeling early on. Brynn Coughlin took a Kayla Olszewski pitch over the center field fence in the second at-bat of the game to put Colchester ahead 2-0 and a hard-hit double by Maddy Booska in the second scored a pair to add on.

After three innings, Rutland was facing a 6-0 deficit.

“It seemed like they had a lot more runs than they did, that feeling of an uphill battle,” said Ravens coach Dick Wright. “We made a couple of mental mistakes in the middle of a big inning.”

Jumping up quick was a big focus for the Lakers, who had lost three in a row coming in, including losses to elite clubs like BFA-St. Albans and Essex.

“We talked about starting in inning one, instead of inning four,” said Colchester coach Connie Sheets. “It made a huge difference.”

A lead-off single from Madi Smith led to Rutland’s first run in the fourth when Sam Bates shot a hard grounder through the left side of the infield, but the Ravens couldn’t add any more.

The sixth inning saw back-to-back RBI hits from Mariah Crossman and Bates as part of three straight hits to start the inning.

Rutland threatened in its last at-bat with two singles, but nobody came around to score.

Smith, Bates, Alyssa Kennedy and Samera Rideout all had multiple hits for RHS.

While Rutland had some strong offensive innings, Lakers pitcher Chloe Palmer did a great job of limiting damage throughout the game. She had a pair of 1-2-3 innings early in the contest that highlighted her ability in the circle.

“She started pitching varsity as a freshman, so she’s thrown a lot of games. Keeping composure is important for her,” Sheets said.

The Ravens would have loved for their season to continue, but their younger girls gained valuable experience that they weren’t able to get last year.

Girls like Olszewski, Kennedy and Rideout, among a few others, had to roll with the punches and take on different roles than they were used to this spring. It’s something Wright hopes will only help them coming back next year.

“It was good experience for those that are going to be back next year,” Wright said.

The prize for the eighth-seeded Lakers is a date with undefeated No. 1 seed Mount Anthony on Friday in Bennington. Having played teams like BFA-St. Albans, Essex and Missisquoi, the challenge of solving MAU hurler Sofia Berryhill is one Colchester will embrace.

The loss for Rutland (5-7) signals the end of the high school career for four Raven starters with Crossman, Bates, Smith and Kayla Hickey, along with fellow senior Madison Poremski, turning their tassel in a couple weeks.

“We’re going to have to fill those spots,” Wright said. “It’s hard when we end this quick. Tomorrow, I won’t have a good feeling, not going to practice and seeing these guys.”