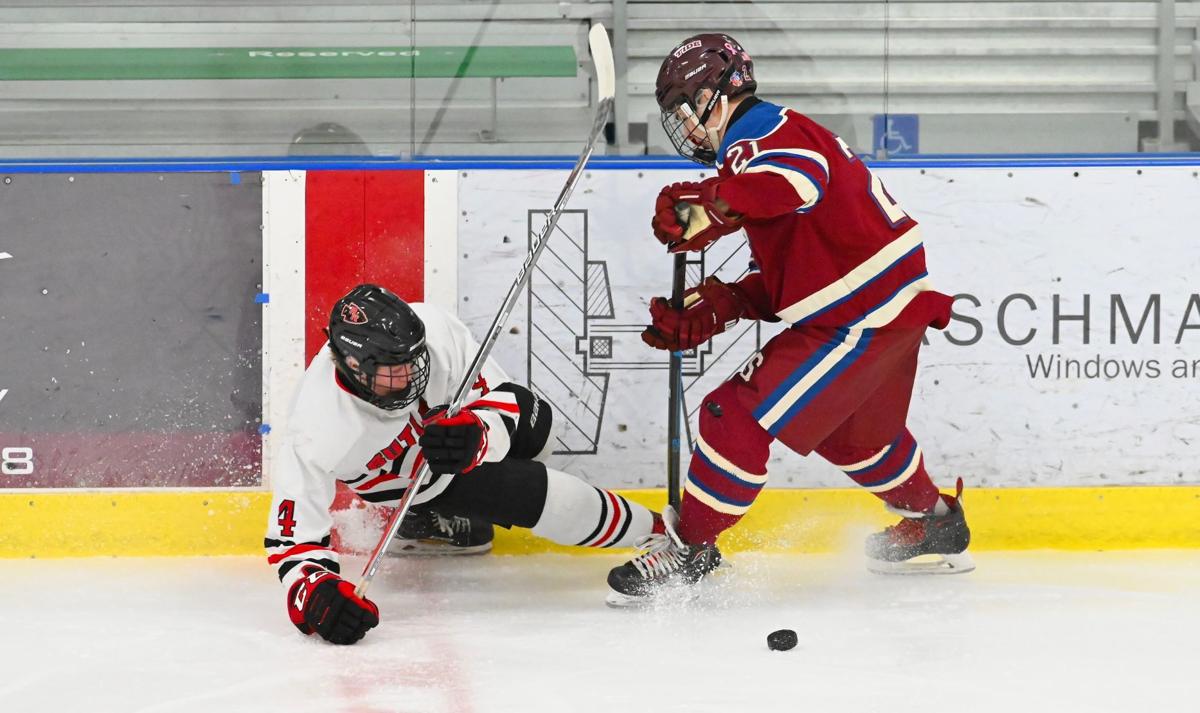 Spaulding High School’s Nathan Romeo (21), right, checks Rutland’s Eric Brewer (4) into the boards while battling for the puck during their matchup on Wednesday at Spartan Arena in Rutland Town. 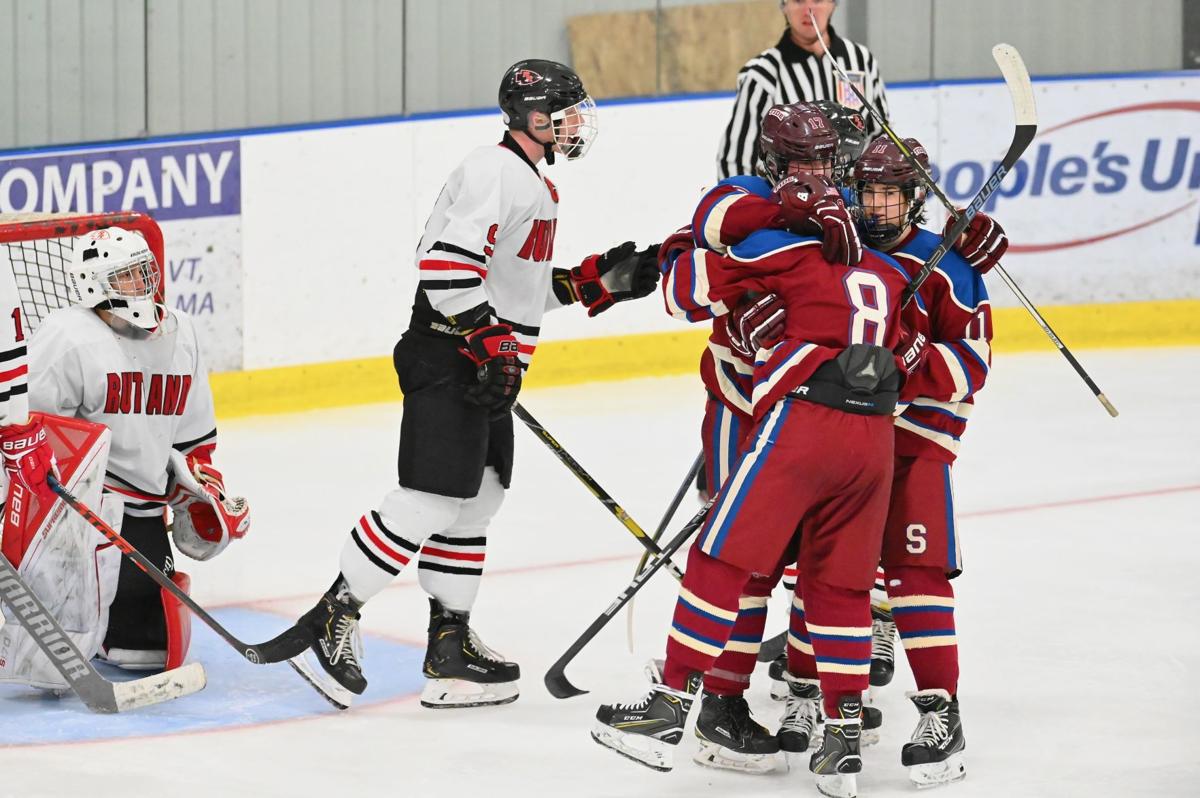 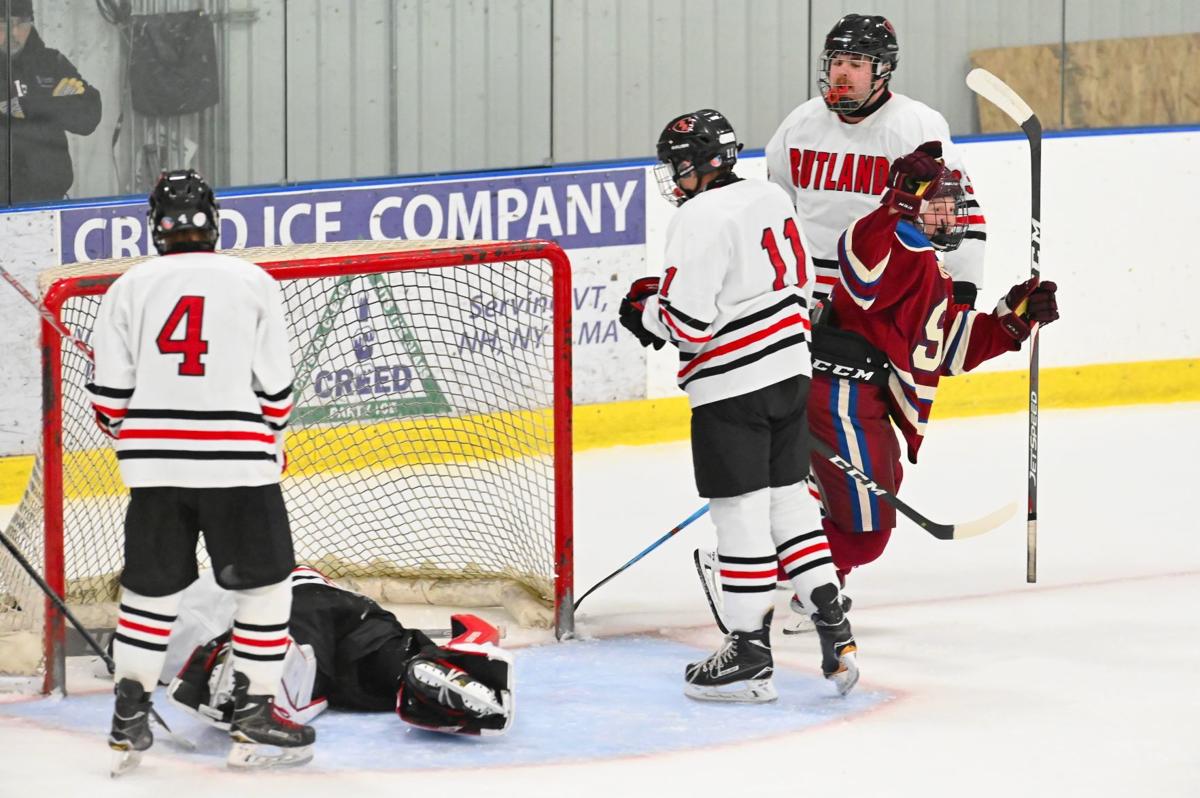 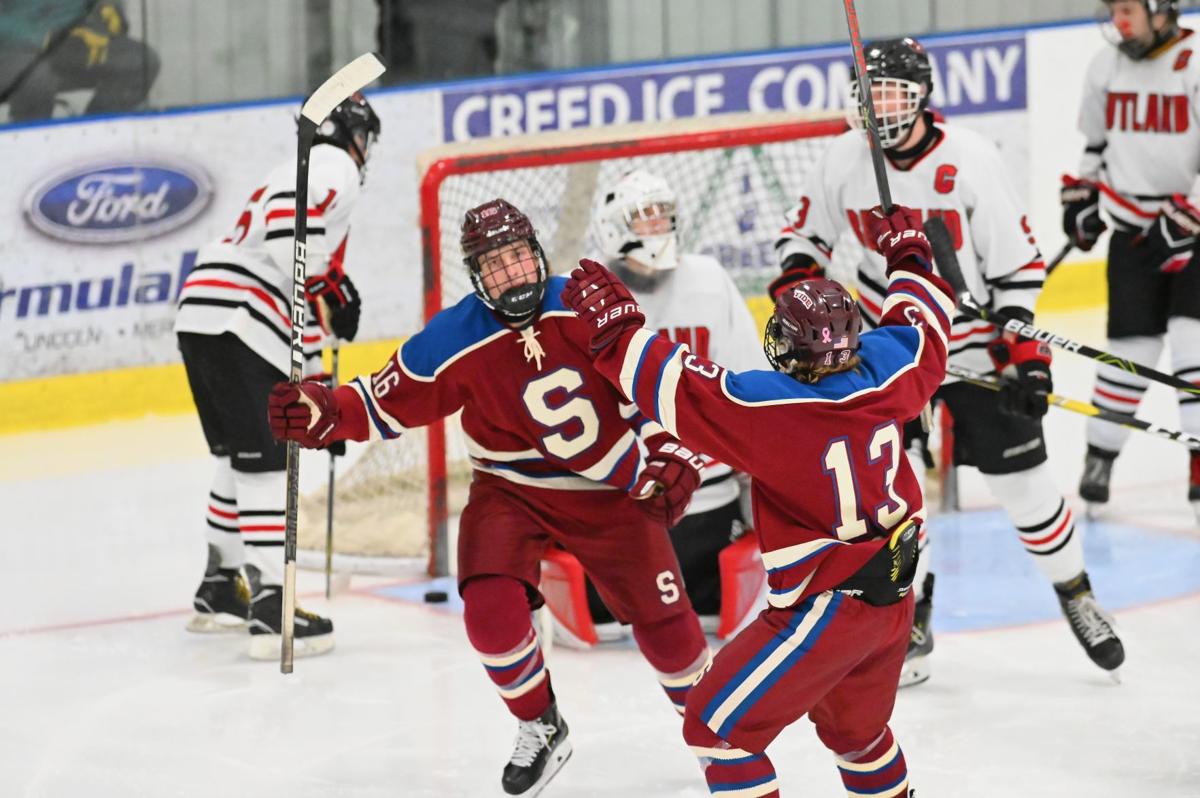 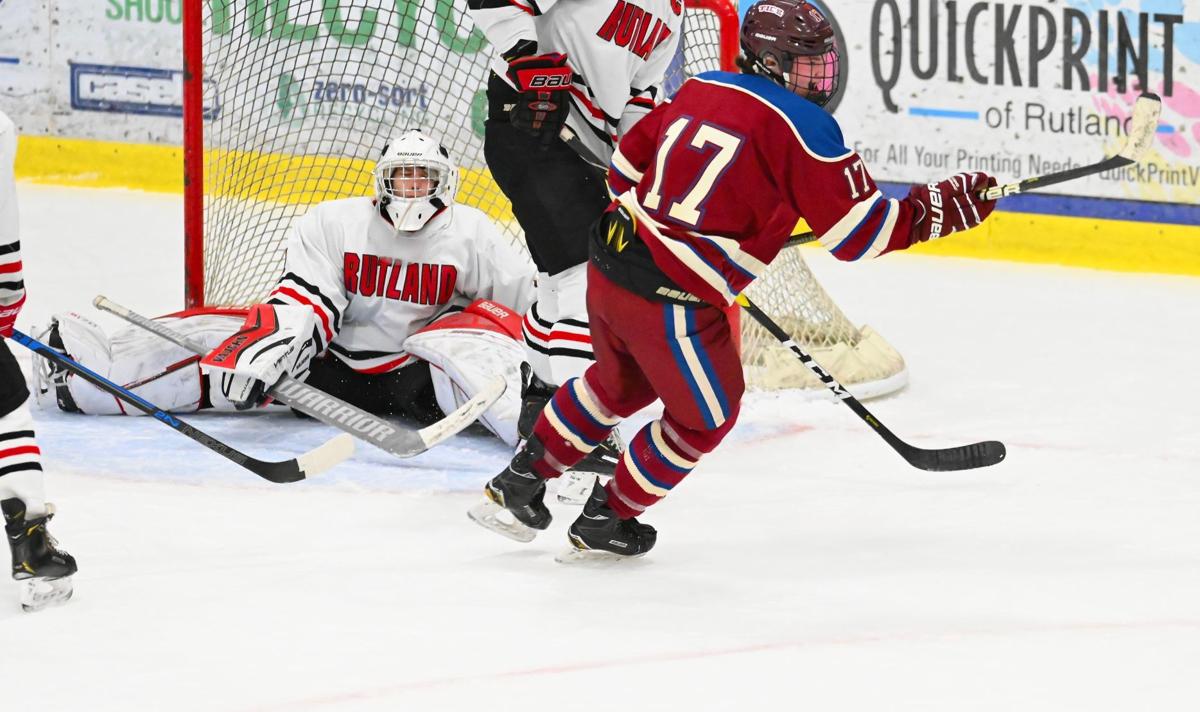 Spaulding High School’s Heath Atwood (17) makes a succesful shot on Rutland goaltender Augie Louras in the first period during their matchup at Spartan Arena in Rutland Town on Wednesday afternoon.

Spaulding High School’s Nathan Romeo (21), right, checks Rutland’s Eric Brewer (4) into the boards while battling for the puck during their matchup on Wednesday at Spartan Arena in Rutland Town.

Spaulding High School’s Heath Atwood (17) makes a succesful shot on Rutland goaltender Augie Louras in the first period during their matchup at Spartan Arena in Rutland Town on Wednesday afternoon.

But the Tide recovered and got a fortunate bounce of the puck that caromed right to Christian Day and he converted it into the goal that lifted Spaulding to a 6-5 victory in Division I boys hockey action Wednesday at Spartan Arena.

Roundly outplayed, especially in the second period when the Tide smashed a 1-1 deadlock with a four-goal flurry, the Raiders found life. They hustled, moved their feet and it paid off with a lightning strike of four goals that knotted it up.

But less than a minute later, while Rutland was pressing for a go-ahead goal and an upset win, the puck deflected out of the Spaulding zone. It caught the Raider defense up the ice while Spaulding skaters were steaming toward the free puck.

Raider goalie Augie Louras (22 saves) did what he had to do rushing out of his crease to knock the puck away. But as fate would have the puck caromed toward Day, who snapped off a shot that found the open net before Louras could scramble back.

“We’re a pretty good team when we play together; the five skaters and the goalie working together,” said Spaulding coach Chad Burke. “But we (in the third period), we started to go individual and went away from what we needed to do.”

Burke knew that he and the Tide were lucky to get out of Spartan Arena with a win because all of the momentum was going the Raiders way.

“Hey, you have to give Rutland a lot of credit,” he said. “They fought back and nearly pulled it off.”

Meanwhile, Rutland’s first year head coach Mike Anderson loved how his team responded in the third period after he challenged them with what he called a “gut check,” but clearly disappointed that they couldn’t finish the job.

“We’re pretty excited but also pretty frustrated; if we’d have been playing like that four three periods it wouldn’t have been a game we would have been all over them,” Anderson said. “Yeah, a great third period, they came out and battled and got back in the game with four goals. Give them a pat on the shoulder for that I just wished they brought that for three periods.”

The teams traded power play goals in the first period, although Spaulding outshot Rutland 14-5 and pretty much carried the play.

Heath Atwood broke the scoreless deadlock at 10:10 of the opening period. Atwood was on the doorstep to put in a rebound with Jameson Solomon and Evan Dudley garnering assists.

The Raiders tied it on the man advantage with defenseman Eren Cetin lighting the lamp from Ryan Melen.

Spaulding threatened to blow the doors off the Raiders by pouring in four unanswered goals in the middle period. Jamison Mast tipped in the go-ahead goal from Andre Pelletier and Colby Bernard.

Bernard had a heck of a period pumping in the third and fourth Tide goals of the session. Day set him up twice while Christian Gagne and Attilio Perantoni added helpers. Brady Lomberti also scored for the Tide as Spaulding scored four goals on nine shots.

Maybe with the four-goal cushion, the Tide became a bit overconfident, or perhaps the Raiders were simply super motivated but Rutland answered with what Anderson called “the best period I’ve seen them play.”

Eric Brewer was the catalyst.

The senior forward triggered the comeback by getting off a strong shot while steaming down the right wing. The shot eluded Tide goalie Kyle May (13 saves) and knocked in off the far post. Just six seconds later, Brewer unleashed another dot from the right side that beat May a second time and the Raiders were flying.

Two minutes later quick and accurate passes set up Cetin’s shot from the left point that made it 5-4. Exactly a minute later, Moore scored the equalizer on the power play from Ethan Coarse and Melen.

That four goals were scored in three minutes is remarkable but unfortunately for the Raiders there was still five minutes left to play. That gave the Tide time to recover. Day’s goal at 10:17 allowed Spaulding to sneak out of the building with a hard fought victory. o

The win lifted the Tide to 6-1 and into a match with Rice Saturday at the BOR, while the Raiders fell to 1-6 and host CVU Saturday.

Chuck Clarino was a longtime sportswriter for the Rutland Herald, and continues to contribute as a freelance journalist.

Rutland Herald Please recheck your information before you print your articles. The correct spelling of Colby Bernard is Colby BERARD. Thank you.