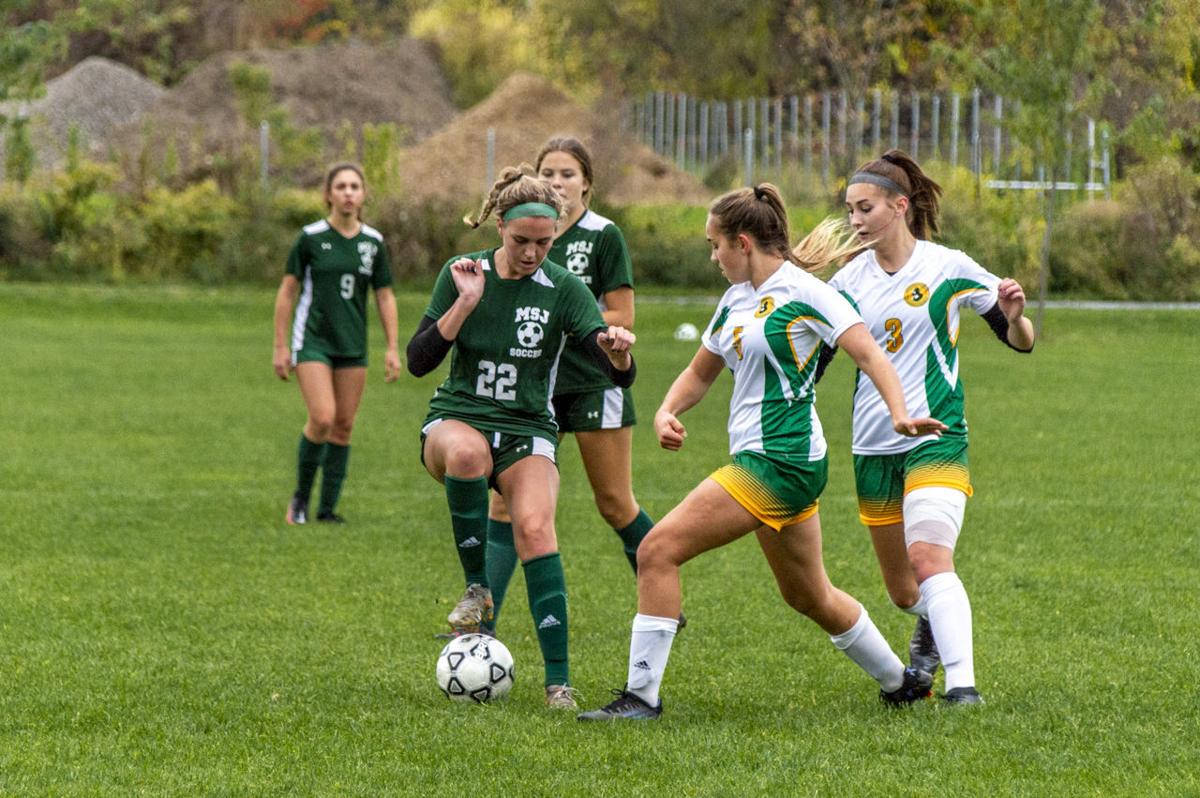 West Rutland’s Aubrey Beaulieu (5) and Olivia Cyr (3) work to steal the ball away from MSJ’s Taylor Blodorn (22) during Thursday’s game at Abatiell Field. 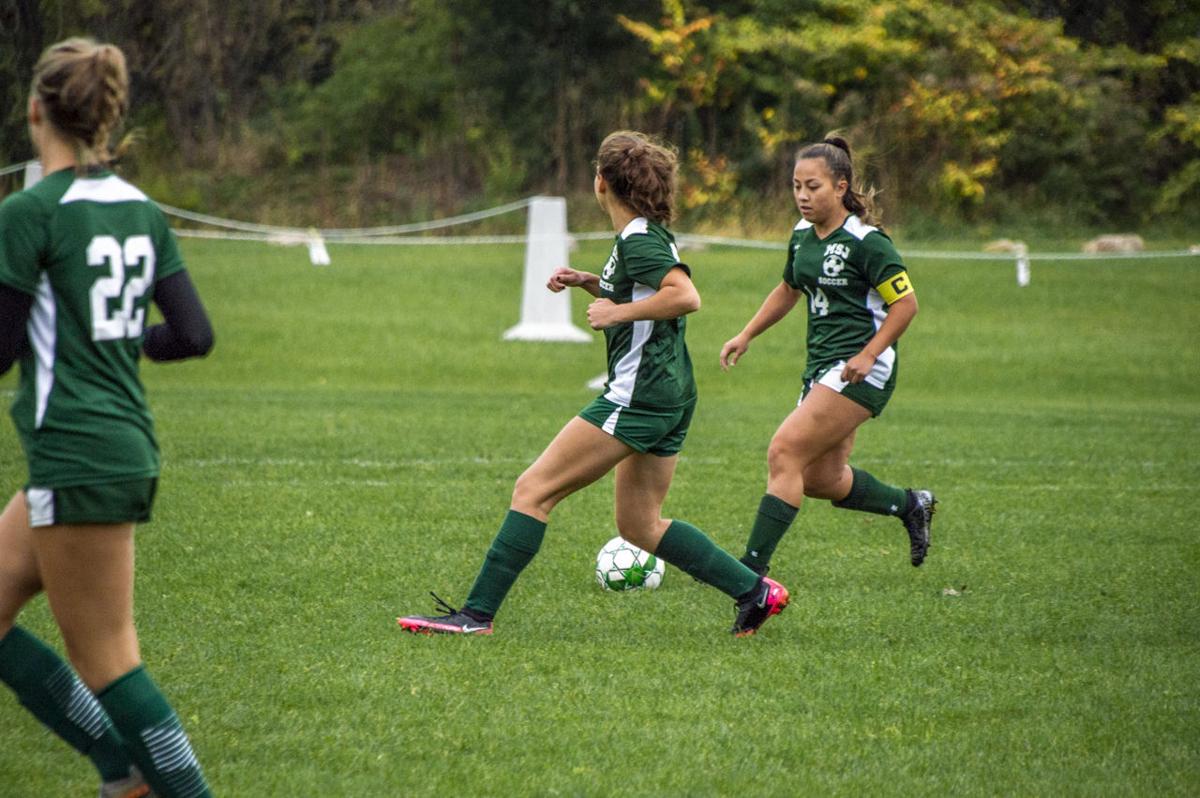 West Rutland’s Aubrey Beaulieu (5) and Olivia Cyr (3) work to steal the ball away from MSJ’s Taylor Blodorn (22) during Thursday’s game at Abatiell Field.

The West Rutland girls soccer team came to Abatiell Field determined to protect its No. 2 seed in the Division IV playoffs. But it was Mount St. Joseph earning a 3-1 victory and, possibly, setting itself up for the No. 2 seed when the playoff pairings are posted on Oct. 25.

The Mounties got two goals from Brooke Bishop and a superb performance in the net by Cindi Carranza in knocking off the Golden Horde.

The Horde ends its regular season at 10-4 and the Mounties are 8-3-1 with some business still to take care of. Arlington comes to Abatiell Field on Saturday morning in a game with plenty of importance attached to it for MSJ.

The first good scoring chance belonged to West Rutland, a nice run and shot that whistled just wide by Peyton Guay four minutes into the game.

Then, the Mounties threatened. Scary runs by Emma Blodorn and Lauren Costales created the greatest chances.

It was Bishop with the game’s first score. It came with 25:16 left in the half. She placed it high in the cage just out of reach of Westside’s outstanding goalkeeper Serena Coombs.

The Horde nearly got on the board when Anna Cyr one-touched Guay’s corner kick, a rocket that went barely wide.

It was Arianna Coombs who had the answer for the Horde. She sent a cannonading shot from 30 yards away on a direct kick over Carranza’s head to knot the score 10:09 before the half.

Arianna Coombs had a great all-round game. She not only had the goal but a couple of defensive headers in the box that might well have prevented goals.

It was still 1-1 when the teams came out for the second half but 6:12 into it, Emma Blodorn broke the tie with a great shot from 30 yards.

It was a great effort by freshman Alyssa Fullam to set up the score. She won a ball on the defensive side of midfield and got the ball to Blodorn to trigger the play.

Down a goal, the Golden Horde began pushing the attack with urgency.

Some stalwart defensive play by the Mounties repelled their forays. Carranza made a difficult save, Tiana Gallipo was her dependable self in front of Carranza and Maya Traska cleared some balls out of the box against pressure.

That is why Bishop’s second goal with 11:27 remaining was so crucial. She scored by working herself into a one-on-one situation with Serena Coombs who had no choice but to come flying out of the net in an effort to cut down the angle. Bishop kept her composure and sent the ball into the net.

MSJ coach Lori Patterson had talked to her players about giving less than the supreme effort in recent games and on this day, they responded.

“We talked a lot about getting our fire back,” Bishop said.

But Bishop’s goal had not salted this one away.

West Rutland was awarded a penalty kick with 31.3 seconds remaining.

Kennah Wright-Chapman struck the ball well but Carranza was able to make the save.

It was the first PK that the Horde been awarded all season.

Both West Rutland coach Deanna Rodolfy and Patterson agreed that if the PK had been good, the Horde would have still had a pulse even with just 31 seconds to go.

“That save was huge,” Bishop said. “Cindi was good today. She made some great saves.

“I am happy for our freshmen. They played well,” Patterson said.

The Mounties carry eight freshmen on the roster.

All freshmen playing contributed but Fullam stood out with her performance at midfield.

Rodolfy and her team will be working on getting more juice to the attack in the practices leading up to the playoffs.

“We can’t win if we don’t score,” Rodolfy said.

The Mounties have one more to play and it figures to be one that will significantly change the look of the tournament brackets.

The Arlington Eagles are in Rutland and they dealt MSJ a 1-0 loss in the first meeting, one of the Mounties few missteps of the season.