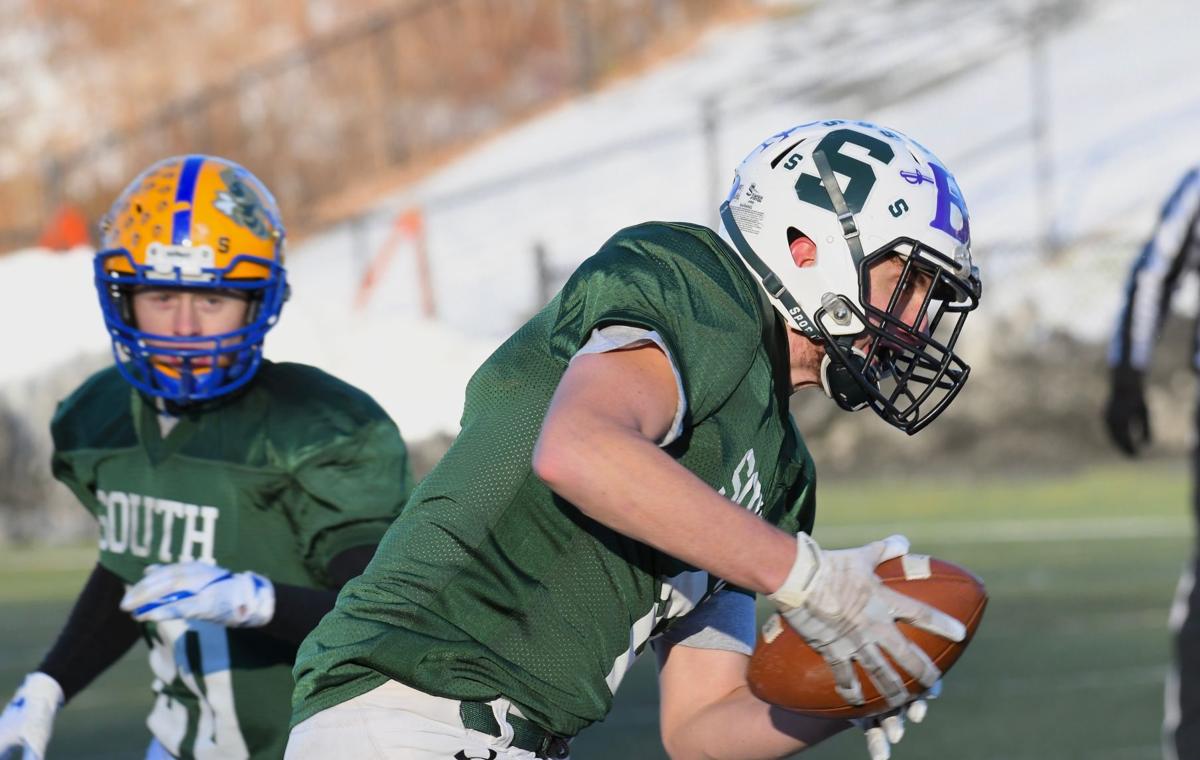 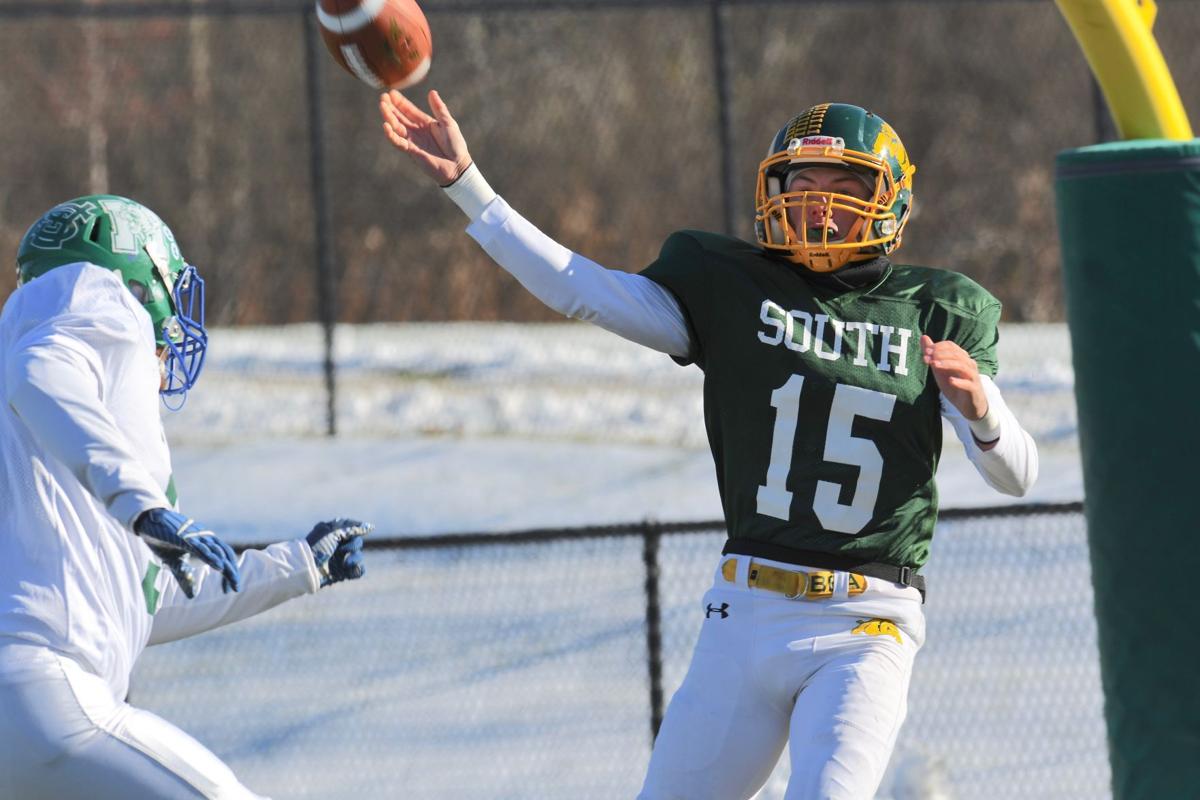 The South team’s quarterback Joey McCoy (15) of Burr & Burton Academy releases a pass just as a North defender closes in during the North-South All Star Game.

The South team’s quarterback Joey McCoy (15) of Burr & Burton Academy releases a pass just as a North defender closes in during the North-South All Star Game.

There isn’t much in Vermont sports that compares to Castleton University’s Dave Wolk Stadium and seeing the beautiful field open up as you walk through the short tunnel of the entryway.

It’s something fans, coaches, players and media have all grown accustomed to in mid-November when the best senior high school football players in the state converge on the Spartans’ campus for bragging rights.

The temperatures can be cold, occasionally there’s snow on the ground, but it’s tough to beat the atmosphere the North-South game brings.

In this COVID-era fall, that game was another unfortunate casualty, but there have been many memorable games to look back on.

While you’re enjoying your turkey and stuffing, let’s look back at some of the best North-South games of the last decade.

2010If you like offense, you came to the right place with the 2010 North-South game. The North seniors bested their southern counterparts 74-48.

Rice quarterback Christian McCormick was a star in that 74-point performance, throwing for 349 yards and six touchdowns.

McCormick had just led the Green Knights to a Division II title on Castleton’s field, when Rice bested Middlebury 38-20.

The North went up by two touchdowns in the first quarter, with McCormick tossing two scores to a pair of Burlington receivers and U-32’s Logan Farrell returning a kick 97 yards for a touchdown.

A touchdown run by Hartford’s Trevor Wood and TD pass from Rutland’s Troy Davine cut the North lead to seven in the second quarter, but the South wouldn’t get any closer.

Davine and Fair Haven’s Nick Bruno both had multiple touchdown passes, but between McCormick and Burlington’s Grady Breen, this game belonged to the North offense.

The 122 combined points blew the previous North-South record of 100 points out of the water, the 2009 record that stood for just one year.

Burr and Burton’s Jake Stalcup might not have put up McCormick-like numbers two years later in the 2012 North-South contest, but his numbers were plenty impressive.

Stalcup threw for 308 yards in the South’s 39-36 win in Castleton. Stalcup, who went on to play at Middlebury College, showed his poise with the South trailing by four late in the fourth quarter.

With less than four minutes remaining, the South offense was on the North 48-yard line and Stalcup connected with BBA teammate Chris Redding and Jim Winslow to get to the 3-yard line. Stalcup found Fair Haven’s Dakota Euber for a score with 1:25 to go.

The North tried to answer, but some great defensive play, most notably by Hartford’s Taylor Potter secured the South win.

Stalcup and receivers like Euber, Redding and Rutland’s Kyle Arnold had a lot to do with that.

The northern side opened up a bit of a lead late in the game, but for the most part, this one was as back and forth as they come.

BFA-St. Albans’ Robert Kelley, more known for his leg than his arm, got the scoring going with a 9-yard touchdown pass to U-32’s Jordan Hanson, capping off a 70-yard drive.

The South responded with a score from Mount Anthony’s Tyler Mattison and successful point after attempt by Otter Valley’s John Winslow for the lead.

A lead that didn’t last long, with Kelley showing off his kicking talent with a 30-yard field goal.

I think you get the picture by now. Scores continued to be traded, before the North opened up the biggest lead of the day, 10, by scoring 15 unanswered points.

The South continued to push for a score, but big defensive plays by the likes of Rice’s Chris Jansen and South Burlington’s Cam Notling, thwarted them.

The southerners got a score late, but it wasn’t enough.

The North had won starting a run of five straight wins.

2016The closest North-South game came in 2016, where the North inched out a 14-13 win, quite the departure from the touchdown-filled contests that preceded and followed it.

The deciding play came in the third quarter. The South was down 14-7, but worked the ball downfield with Cheick Diakite finishing off an 11-yard touchdown run. All the South needed was a PAT to tie, but it sailed wide.

Diakite had 65 yards on the ground, while Bellows Falls’ Jahyde Bullard had 62 yards. North Country quarterback Evan Sarault was the offensive star of the day, throwing for 136 yards and two scores for the North. BBA’s Griff Stalcup threw two TDs for the South.

The 2019 North-South game was in no way close, it was a 47-9 South win to be exact, but it was the perfect cap to a pair of weeks that belonged to southern programs.

What a better way to stamp their dominance by snapping the North’s five-game win streak.

The three-headed attack of the Colonels’ Tyler Millerick and Chris Frost and the Bulldogs’ Joey McCoy led the way.

Dual-threat quarterback Millerick threw for 95 yards and rushed for 85 more. Frost rushed for 127 yards on 15 carries and McCoy threw for 81 yards.

St. Johnsbury’s Trey Alercio threw a touchdown pass to Cale Layman in the first half, but the North offense was stifled otherwise.

“We wanted to show the South was the best,” Davine told Rutland Herald sportswriter Tom Haley after the game.

They certainly accomplished that.

Hopefully, we’re back at Dave Wolk Stadium celebrating the best of the Class of 2022. Fingers crossed. Football gods, the ball is in your end.