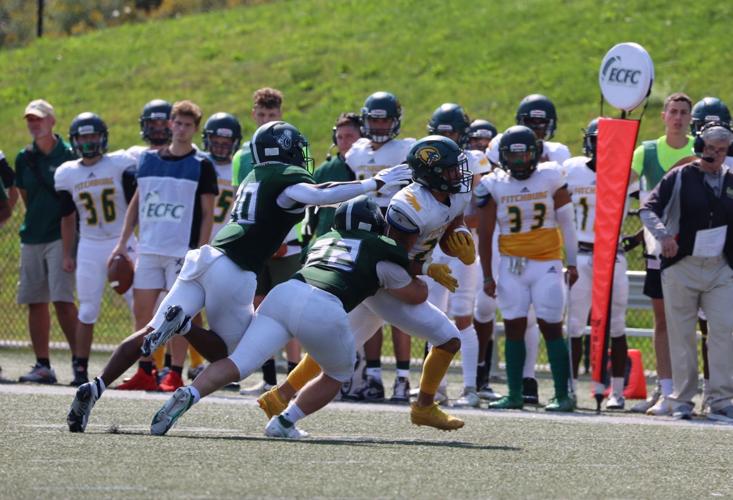 Castleton University’s Ethan Course (30) and Jacob Griggs (22) go for a tackle of a Fitchburg State University player on Saturday at Dave Wolk Stadium. 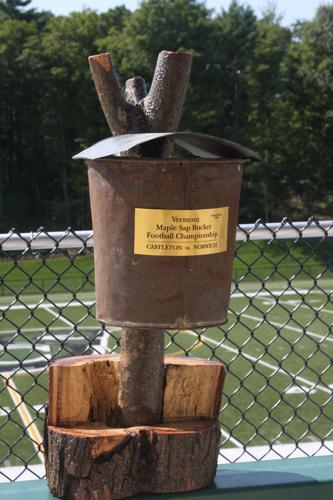 Castleton University and Norwich University face off in their annual rivalry game for the Maple Sap Bucket on Saturday.

Castleton University’s Ethan Course (30) and Jacob Griggs (22) go for a tackle of a Fitchburg State University player on Saturday at Dave Wolk Stadium.

Castleton University and Norwich University face off in their annual rivalry game for the Maple Sap Bucket on Saturday.

Dickinson College and Gettysburg clash for the Little Brown Bucket in their annual rivalry football game. Hamline and Mcalester meet on the gridiron with the Paint Bucket at stake. Indiana and Purdue butt heads over the Old Oaken Bucket.

Give me the Maple Sap Bucket any day.

This game between Norwich University and Castleton University is about Vermont. It has recruiting ramifications and state pride at stake. It showcases Vermont high school graduates in both uniforms.

It was in 2009 when Norwich University quarterback Kris Sabourin, who played for BFA-St. Albans, was watching film on Castleton and began pointing out players who were teammates of his on the Vermont team in the Shrine Maple Sugar Bowl, the high school all-star game against New Hampshire.

That is what this game is about. The connections.

Kickoff at Norwich’s Sabine Field is at 2 p.m.

The Cadets bring an 0-2 record into the game after tough losses of 7-0 to Salve Regina and 30-19 to St. Lawrence. Castleton is 1-1 and coming off a 48-0 pasting of Fitchburg State.

“This game is a critical part of it, the bragging rights. They work for you for a year.”

“I don’t think it is all that important,” Volpone said. “I never thought a player chose a school on the result of a game. There are a lot of other factors — the feel he gets on the visit and the people he meets.”

Getting a victory is so important to the Cadets after losing two games in which they have been competitive.

Murnyack described winning this game as “critical” for the psyche.

“Getting one would change everything,” the NU coach said. “You get that confidence. You come onto the practice field a little bit different.”

There are players to contain for both teams. Volpone knows that his defense must minimize the effectiveness of veteran receiver Trevor Chase. He had 11 catches for 141 yards and a touchdown against St. Lawrence.

“They didn’t have an answer for Trevor. He was pretty explosive,” Murnyack said.

“He had a big game against us last year,” Volpone said. “They are going to try to get the ball to him in space.

Castleton quarterback Evan Smith threw for four touchdowns and was never intercepted in the win over Fitchburg.

“He throws a good ball and he throws it on time,” Murnyack said.

But it is not like the Spartans are one-dimensional. Volpone has always prided himself on a balanced attack.

“They ran the ball very well, too,” Murnyack said.

The Spartans garnered 204 rushing yards against Fitchburg with nine players getting carries.

Murnyack and Volpone agree that the state rivalry and trophy aspect of the game is not lost on the players.

“It is really important for the players from Vermont and to those who have played in the game,” Volpone said.

Murnyack has had the trophy brought to practice this week, He said the players who have experienced the game know it is is important. Bringing it to the practice field is for the benefit of the first-year players.

Vermont college football is in full swing this week. The NESCAC is finally starting and Middlebury is at Amherst where the kickoff is also at 2 p.m.

This will be the final season for longtime Middlebury’s Bob Ritter as the head coach.

The Panthers have two Vermonters on the team — sophomore wide receiver Seth Boffa from CVU and freshman running back Ollie Orvis of Essex.

QUICK KICKS: Brattleboro Union High graduate Tyler Millerick had a day in leading Western New England University to a 38-14 victory over Westfield State. He completed 12 of his 19 passes for 194 yards and three touchdowns. He was also the Golden Bears leading rusher with 46 yards on 10 carries. ... The University of New Hampshire puts a 2-0 record on the line at home on Saturday at 6 p.m. against North Carolina Central. ... Hartford High graduate Kyle Hamilton gets a start on the defensive line on Saturday for Bates. The Bobcats are at Wesleyan for a 1 p.m. kickoff on Saturday. ... Dartmouth gets to kick off its season in Hanover against Valparaiso on Saturday at 1:30 p.m.

Former Burr and Burton Academy head coach Jason Thomas in on the staff at Middlebury College. ... Rutland’s Slade Postemski, the 2021 Vermont Gatorade Player of the Year, has his first college game on Saturday He is a freshman wide receiver for Bowdoin which opens at home against Hamilton. ... Bellows Falls’ Jon Terry might be in on something special at the University of New England. The former Terrier quarterback is listed as a freshman wide receiver for UNE which is off to a 2-0 start after beating Coast Guard and Bridgewater State. The Nor’Easters host Gallaudet on Saturday. ... Rutland’s Toby Jakubowski has appeared in both games for 0-2 Husson on the defensive line and has a couple of tackles. Other Vermonters on the Husson roster include CVU’s Isaac Bergeron and Bellows Falls’ Jed Lober and Hunter Smith.