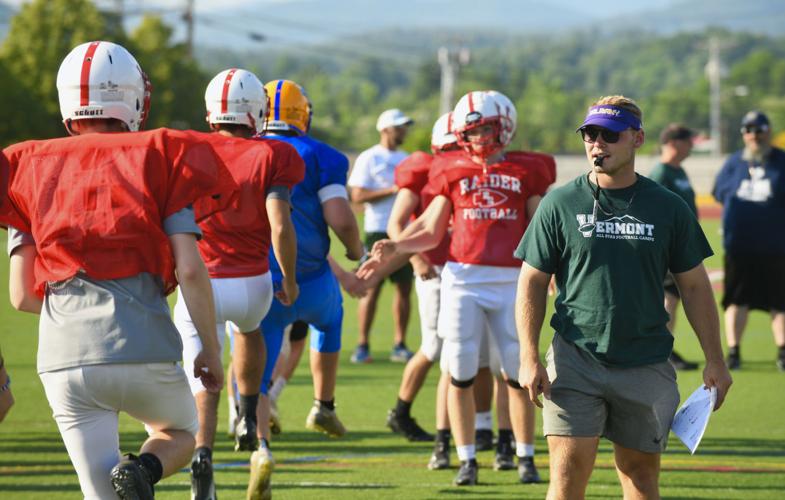 Chris Redding, executive director of the Vermont All Star Football Camps runs players through calisthenics drills during the first day of camp on Monday at Rutland High School. 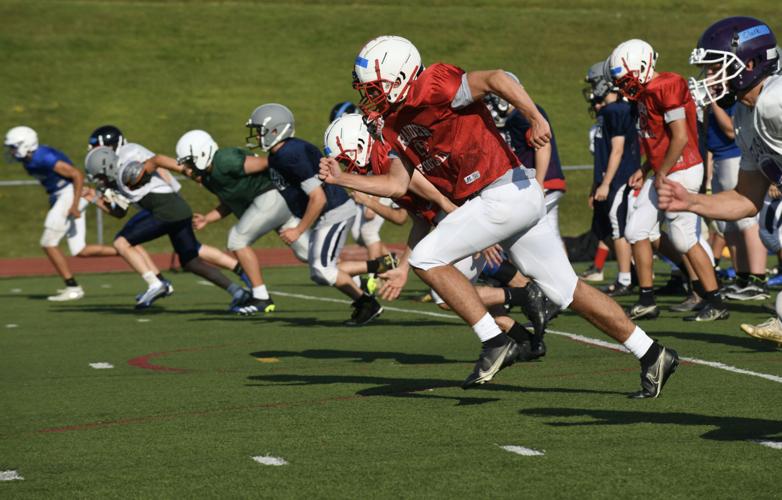 Players sprint during the first day of the Vermont All Star Football Camp, held at Rutland High School on Monday. 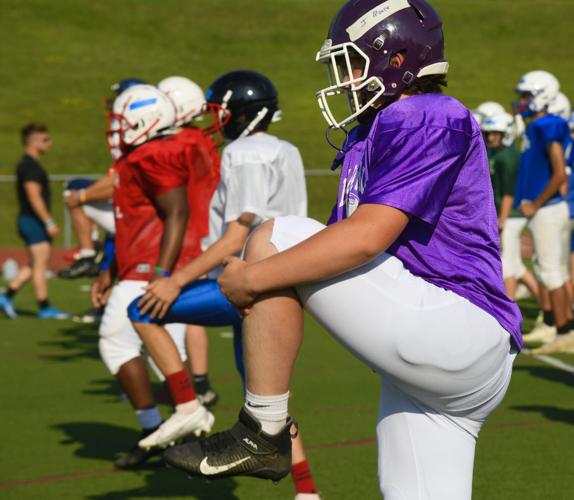 A Bellows Falls player stretches it out on the first day of the Vermont All Star Football Camp, held at Rutland High School on Monday.

Chris Redding, executive director of the Vermont All Star Football Camps runs players through calisthenics drills during the first day of camp on Monday at Rutland High School.

Players sprint during the first day of the Vermont All Star Football Camp, held at Rutland High School on Monday.

A Bellows Falls player stretches it out on the first day of the Vermont All Star Football Camp, held at Rutland High School on Monday.

The biggest story at the Vermont All-Star Football Camp on Monday at Rutland’s Alumni Field was the robust numbers. Whereas last year there were about 50 players at the camp, the 2022 edition of the camp boasted about 130 players. Executive Director Chris Redding said it might reach 150 before the week is over.

“I think kids are just ready to get back to playing,” veteran Poultney High coach Dave Capman said.

Tyler Higley was back on the camp staff, this time as a coach at Castleton University again.

Higley played at Castleton, first as a quarterback and then as a defensive back. He then had three years on the staff, one as an intern and two as a graduate assistant.

Last year he was working on the Western New England University staff with the defensive backs and special teams.

He wanted to make the jump to a coordinator position and when the defensive coordinator spot opened up at Castleton, Higley found himself back wearing the green of CU.

“It was a great role at Western New England and I learned a lot. It was good to have a different experience,” Higley said.

The switch back to Castleton was seamless.

“The seniors I already knew and it was great to develop relationships with the younger guys during spring football,” Higley said.

Hall and Otter Valley’s new head coach Jordan Tolar are at camp all week and they have been overseeing their players in the weight room this summer.

“We have been going three days a week in the weight room. We’ve got a group of guys working hard in there,” Toalar said.

“Our players are doing a great job in the weight room. We have two different sessions, 11 a.m. and 5 p.m., trying to make it easy for the guys to get in there,” Hall said.

Tolar will have an interesting quarterback battle when camp starts in August between Luca Polli and Caleb Whitney.

“I’ve talked to them and they know it will be an open competition,” Tolar said.

Both have the athleticism that means there will be a place on the field for them if they are not playing quarterback.

“Every position will be an open competition,” Tolar said.

Tolar will get a good look at his Otters on Aug. 28 at Markowski Field with CVU in town for a scrimmage.

“It feels like football is in the air and I am psyched to see the numbers up,” Tolar said as he introduced himself to the players.

NOTES: That prolific pass-catch tandem from Rutland High of Trey Davine and Slade Postemski are on the staff. Postemski will be playing at Bowdoin College and Davine, the quarterback, at Hartwick where Vermonters Brad Ruderman and Kyle Tipson once had prolific careers as passing QBs. .... Poultney and Windsor, two Division III teams who do not play one another during the season, will have a preseason scrimmage in Windsor on Aug. 28 at 10 a.m.. ... Fair Haven assistant coach Keith Hier wore a T-shirt that read “Redemption Tour 2022” with the Slaters schedule beneath it.