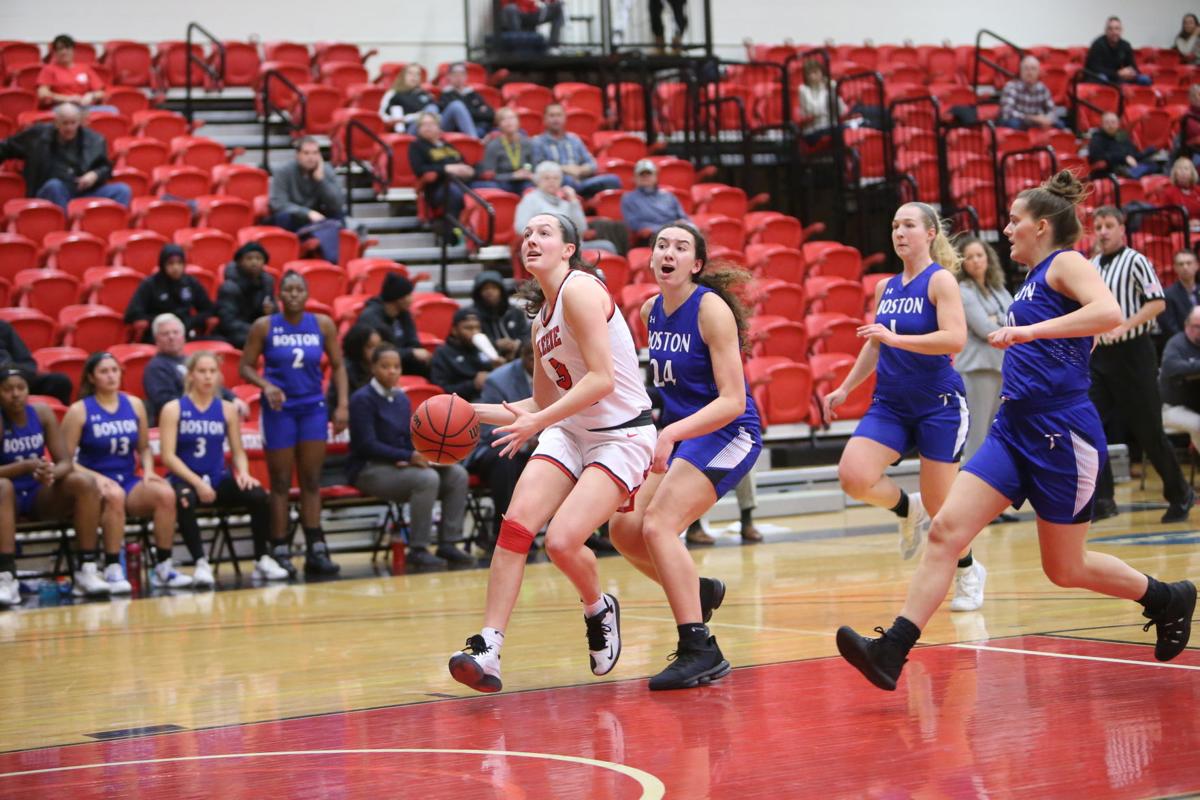 Keene State’s Hailey Derosia drives to the basket in a game against UMass Boston last season. 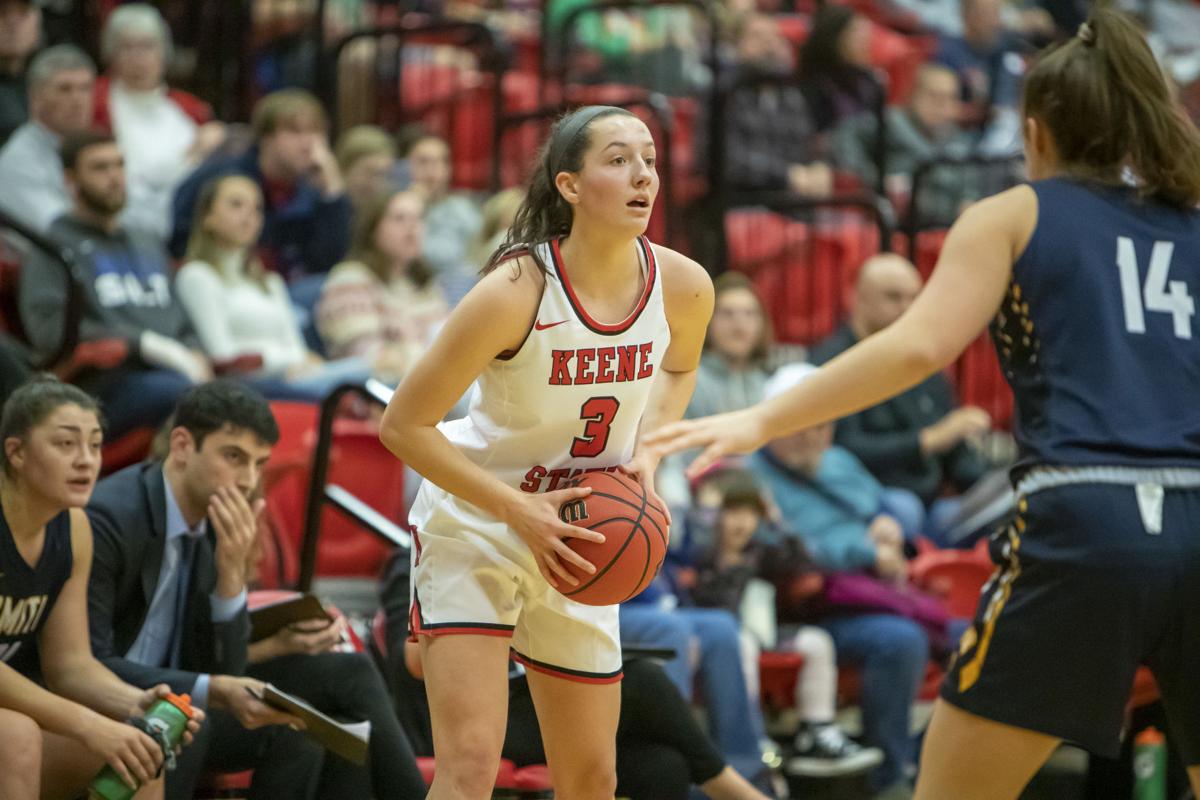 Keene State’s Hailey Derosia drives to the basket in a game against UMass Boston last season.

Back in the early 1970s when girls high school basketball was just gaining a foothold in Vermont, Bellows Falls coach Anne Rodia was one of those ahead of her time. She took her basketball seriously and drilled the Terriers in the intricacies of the game so that they played at a different level from their opponents.

She also had a player the likes of whom had not been seen in girls basketball around those parts. Debbie Higgins could handle the ball and shoot it.

That was a windfall for the Owls. After all these years, you will still find Higgins name atop Keene’s scoring leaders with her 22.0 points-per-game average.

Higgins is in KSC’s Hall of Fame. Rutland’s Barb Lougee came along in the next decade. She never reached the 1,000-point milestone at Rutland High but did so at Keene, pouring in 1,081 points from 1982 through 1986.

There have been other standouts through the years from southern Vermont. Michelle Boudreau played her high school basketball over the state line in Massachusetts but the North Readsboro product was another of the better Vermonters to wear the red and white for the Owls.

Otter Valley’s Emily Flewelling, Brattleboro’s Sarah Linn and Green Mountain’s Meghan Farrell are among others who have stood out for the Owls.

The beat goes on. Keene coach Keith Boucher has three Vermonters on his team that will open the season on Saturday with a road game against Rhode Island College.

Boucher has done pretty well in his yield from the Green Mountain State.

“I’d like to do a little better. A lot of them stay home and go to Castleton,” Boucher said.

“There is a good brand of girls high school basketball being played in Vermont today.”

Burke and Derosia were starters last year and Burgess is the newcomer, trying to assert herself as a freshman.

“Rylee has been a pleasant surprise. She reminds me a lot of Jordyn,” Boucher said.

Burgess gives Boucher a six-footer in the post, an ingredient that can be valuable in the Little East Conference.

“She has great hands. When we throw the ball in the post, she doesn’t lose it which is unusual for a freshman,” Boucher said.

Burgess and the 5-foot-11 Burke challenge one another during practice.

“They are making each other better,” Boucher said.

“Jordyn was a walk-on for us. Her senior year at Mount Anthony, I got an email from her coach.”

Boucher recalled that email describing Burke’s work ethic. The coach told him that he would get Burke’s best every single day.

Many times those endorsements from high school coaches ring hollow, but this one was on the money.

She worked and worked until she earned her starting spurs the next season.

“She continues to get better,” Boucher said.

Derosia is someone Boucher has known since she was 7 or 8 years old. Brattleboro is a short drive to Keene so Morgan Derosia and her younger sister Hailey would attend the Owls’ basketball camp.

Each year a trophy is presented at that camp to the player with the best work ethic, attitude and who embodies what it means to be a great teammate.

Morgan and Hailey both received the honor during their years at the camp.

“Hailey is very unselfish. I wish she would be a little more selfish,” Boucher said.

During one practice last week, Boucher had to stop the action long enough to ask Derosia what she was doing when she passed up a shot 5 feet from the basket and kicked the ball out to a teammate behind the 3-point line.

“She does a lot of things for us,” Boucher said.

The numbers from last season support that. Derosia led the team in scoring with 9.3 points per game was second in rebounding behind Burke by snaring 5.1 a contest.

The Owls have their first meeting with Castleton on Feb. 17 in Keene’s Spaudling Gymnasium. There will be a lot of Vermonters on the floor that day and they won’t all be wearing the green and white of the Spartans.

NOTES: Lyman Morgan, a 1972 Proctor High graduate, had an outstanding soccer career at Keene State. When he died in 2011, Keene State soccer coaches Ron Butcher and Rick Scott attended the celebration of his life at Franklin’s Restaurant in Proctor. ... Another Proctor High graduate who was a soccer standout at Keene State was Hal Shortsleeve. When he retired after 34 years as an administrator at Windham Middle School in Maine, the school’s library was named for him. ... Brattleboro’s Meghan McLoughin had a program-best 0.21 earned run average her senior season for the Keene State softball team. She was a two-time Little East Conference Player of the Year and was inducted into Keene’s Hall of Fame in 2012.