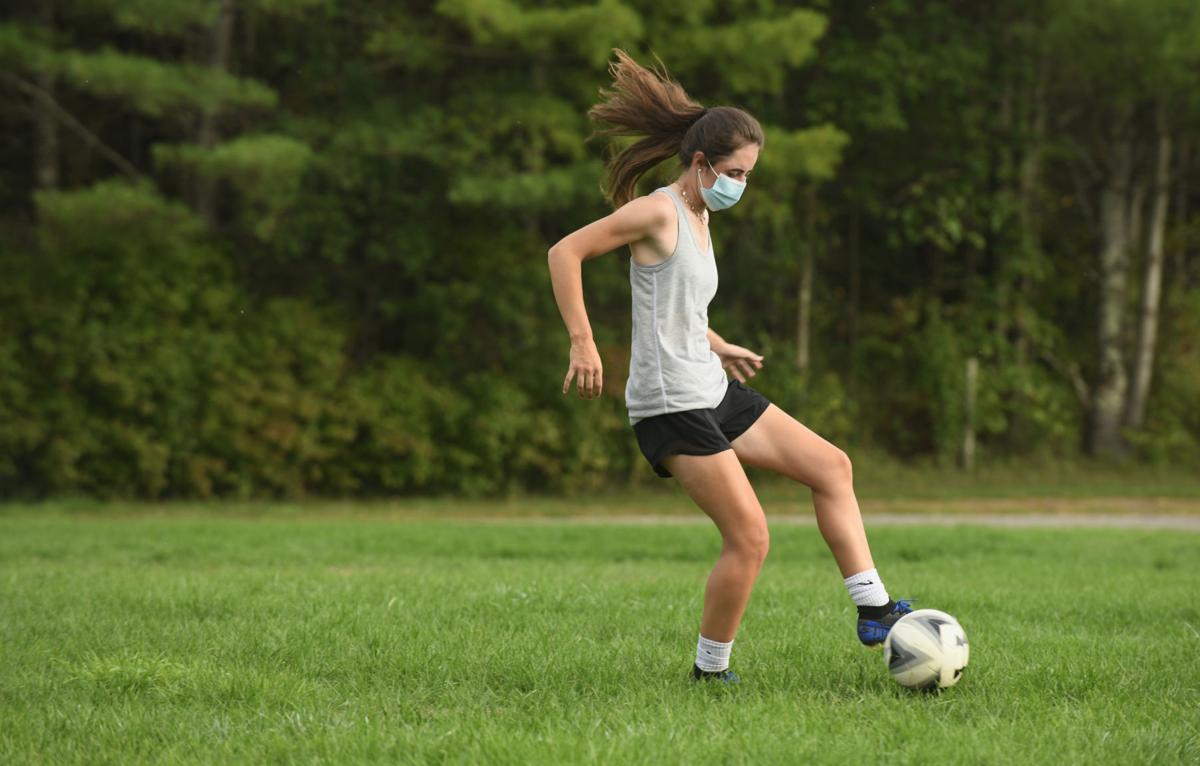 Senior soccer player Mia Politano practices ball handling in a drill during their first practice of the year on Tuesday afternoon at Otter Valley Union High School in Brandon. 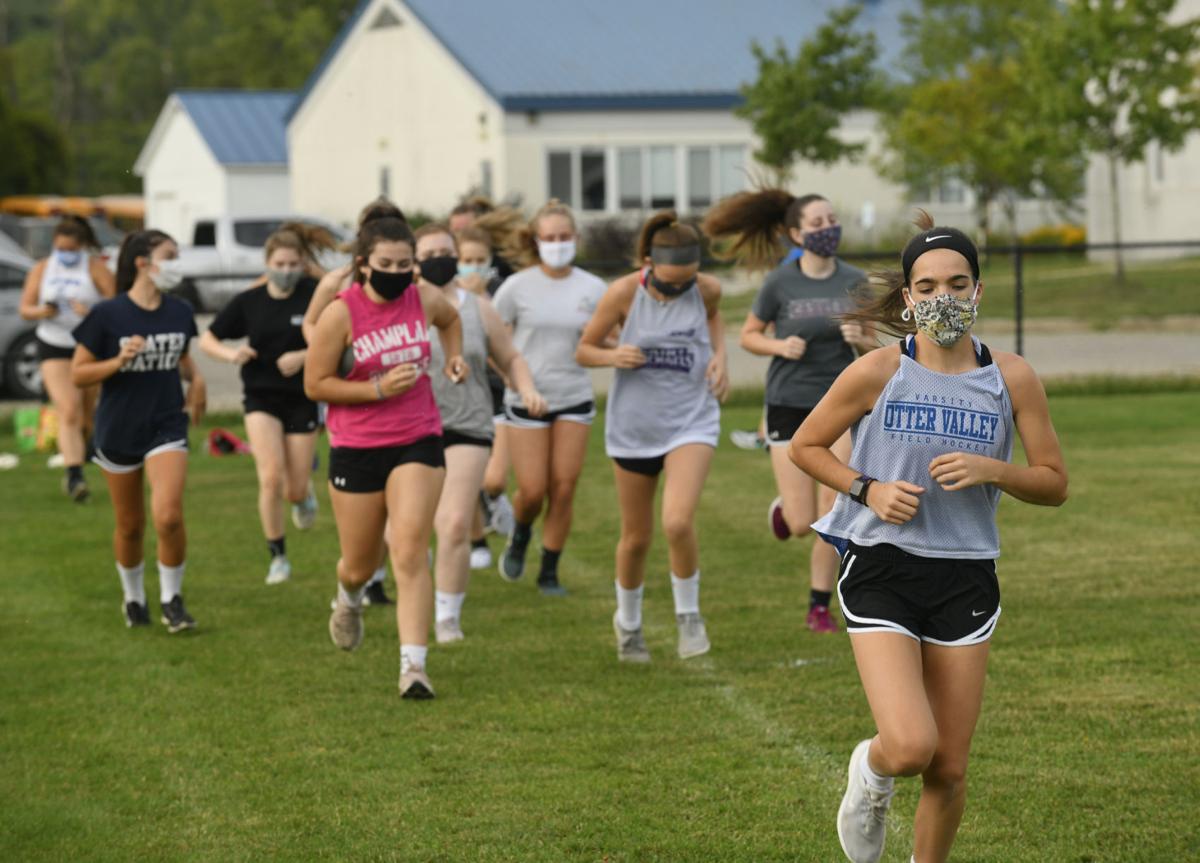 Members of the Otter Valley field hockey team run during their first practice of the year on Sept. 8 at Otter Valley Union High School in Brandon.

Senior soccer player Mia Politano practices ball handling in a drill during their first practice of the year on Tuesday afternoon at Otter Valley Union High School in Brandon.

Members of the Otter Valley field hockey team run during their first practice of the year on Sept. 8 at Otter Valley Union High School in Brandon.

BRANDON — There are new coaches at Otter Valley with Tammi Blanchard at the helm of the girls soccer team and Jodie Keith taking the reins of the varsity field hockey program. But the newest aspect of this fall is the dreaded mask necessitated by COVID-19 protocol.

Blanchard said she will be substitute players more frequently because breathing can be made more difficult by wearing the mask.

“It’s kind of unfortunate we have to wear the masks but as long as we’re playing we are happy,” Proctor girls soccer coach Rachel Stuhlmueller said.

Everyone was extremely happy to be out on the field again for the first day of formal high fall sports practices on Tuesday. The virus had snatched away girls basketball championship games and the entire spring sports season. Being back just felt good.

She would have been a member of a softball team that was returning most everyone from an Otter club that made it all the way to the Division II finals in 2019.

At least Politano had some great moments this summer to bridge the large gap between basketball and soccer. She won the Vermont Junior Golf Amateur championship and finished fourth overall in the Women’s Amateur at Dorset Field Club in early August.

“That was pretty exciting. I wasn’t expecting it,” Politano said.

She is expecting the Otters to make some waves in soccer. They had optional practices this summer every Monday and Wednesday and there was a robust turnout for them.

“I am definitely optimistic about the season,” Politano said.

Blanchard plans to play Politano up top where she will be counted on to shoulder much of the scoring load.

Another key piece to the puzzle will be Mallory Lufkin.

“She will be running our defense,” Blanchard said. “She has a good head on her shoulders.”

There is no JV team at Otter Valley so freshmen like Sierra Cormany will be thrown right into the varsity waters.

“We had a good turnout this summer. A lot of players came,” Cormany said.

“These girls had good coaches before me with Rick Hedding and John White. I picked up things from both of them,” Blanchard said.

The Otters did some running over the summer and Blanchard believes coming to camp Tuesday in condition will allow her to spend time on the fundamentals as they prepare for the opener on Sept. 24 at Hartford.

Keith is grooming her Otters for an opener at Springfield on Sept. 23.

Her field hockey players also put in the work over the summer, showing up for the optional practices each Monday and Wednesday.

The Otters graduated a standout field hockey goalie in Elinor Ross and now Lily Morgan, a freshman, will put on the pads.

There are no new coaches at Proctor where Chad Wilson is back to direct the boys soccer team and Scott French and Chris Hughes are returning as co-coaches of the girls soccer team.

But the field will be new. The game field at Taranovich Field has been completely resurfaced and the Phantoms will get to play on it for the first time in a couple of years. They played the 2018 season at College of St. Joseph and the 2019 campaign on the secondary field adjacent to the main field at Taranovich.

Like Blanchard, French says the Phantoms will run substitutes into the game at a much faster pace because of the mask-wearing.

The Phantoms are a veteran group, losing only two seniors from last year’s state championship team. They have 22 players, a huge roster for a Division IV squad.

“It’s going to be a huge deal,” said French of the players acclimating themselves to the masks.

The Phantoms had optional summer practices and they were encouraging to Hughes and French.

They have nine seniors on this team that is trying to defend its state championship as well as get to a 10th consecutive title game.

Masks. Remote learning. Having your temperature taken before each practice. It’s a different kind of a fall.

But being back on a field makes it all worthwhile. That was crystal clear on Tuesday.