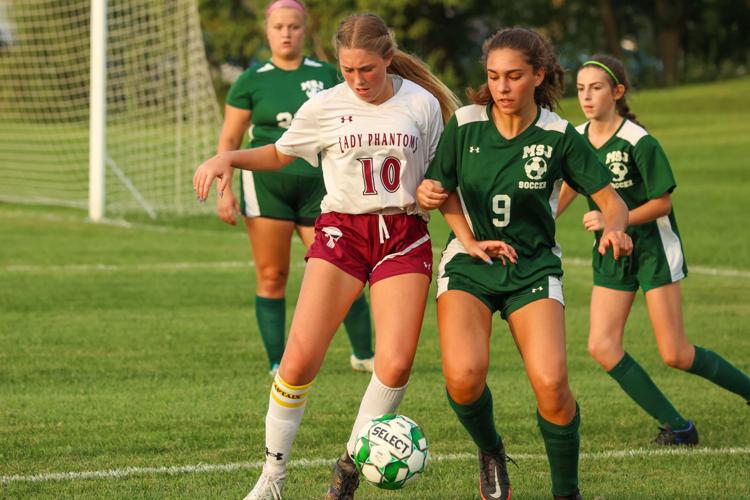 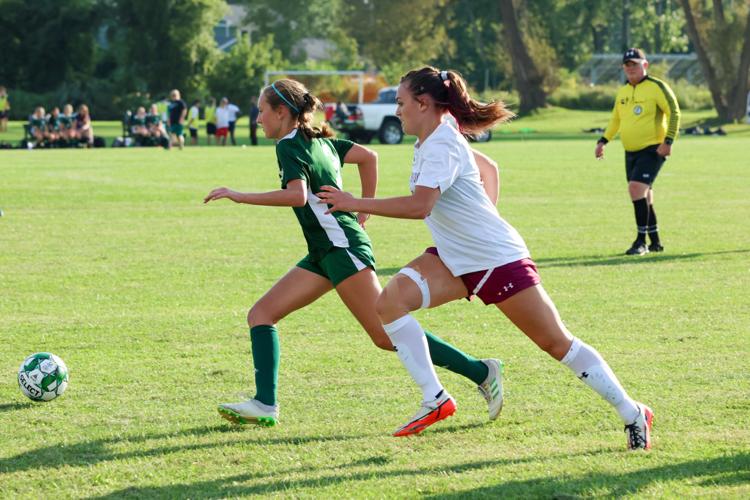 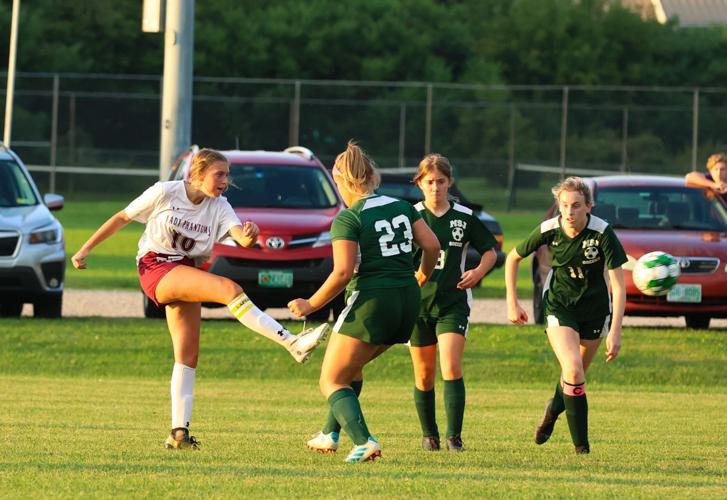 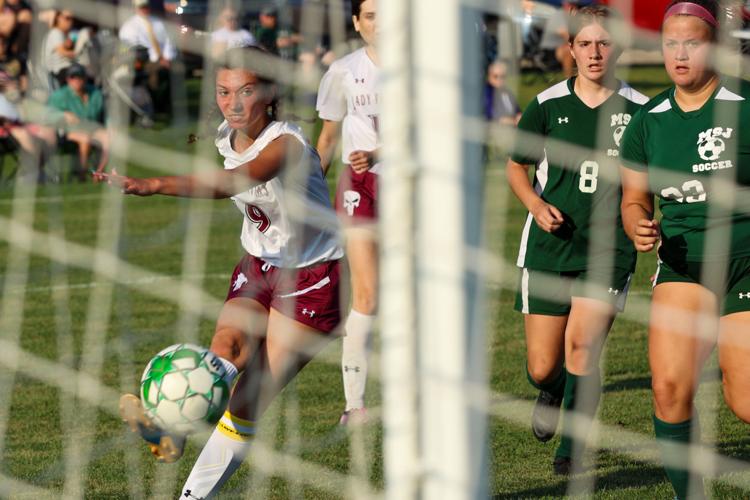 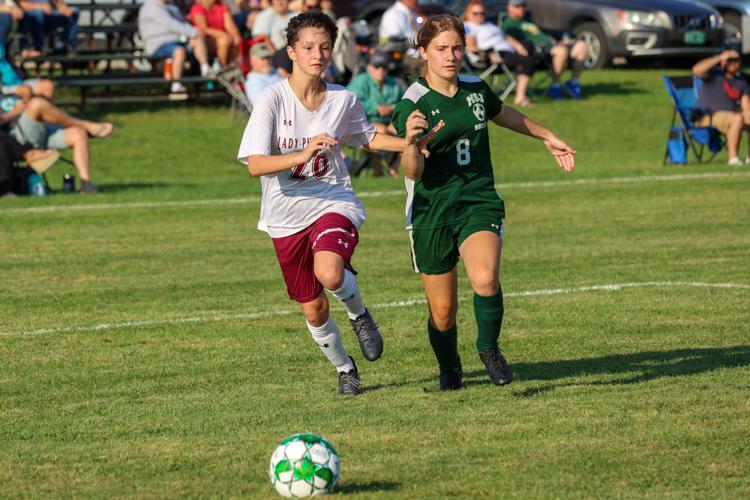 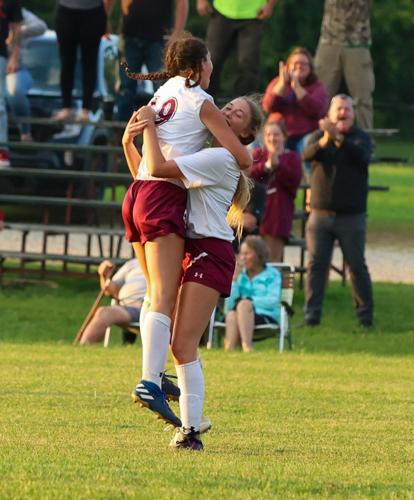 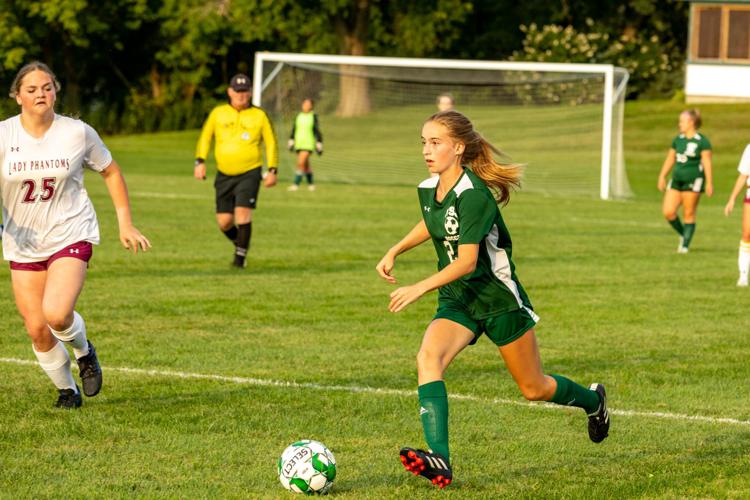 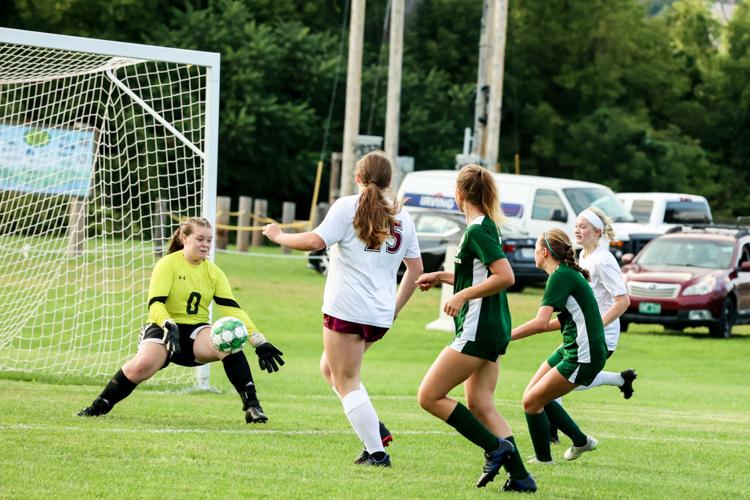 Proctor goalkeeper Cadence Goodwin (0) gets in position for a shot from Mount St. Joseph's Isabella Anderson during Wednesday's game at Abatiell Field. 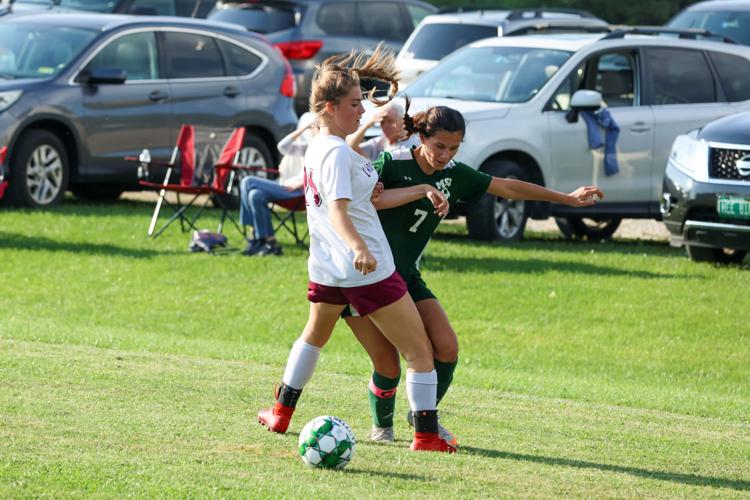 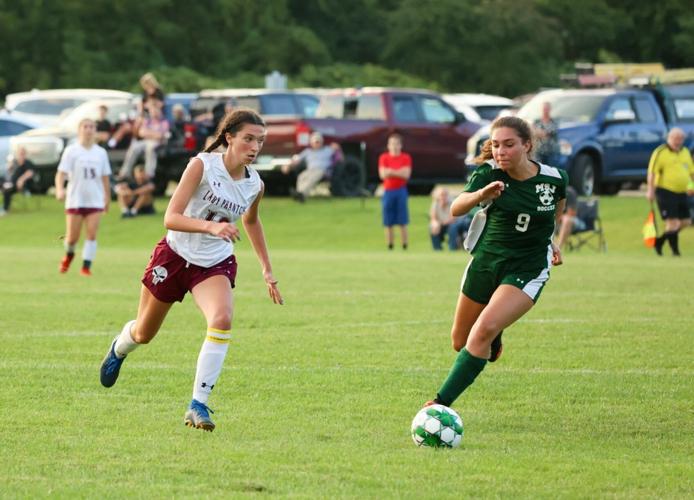 Proctor's Jenna Davine dribbles up the field, while Mount St. Joseph's Leah Majorell (9) comes on to defend during Wednesday's game at Abatiell Field.

Proctor goalkeeper Cadence Goodwin (0) gets in position for a shot from Mount St. Joseph's Isabella Anderson during Wednesday's game at Abatiell Field.

Proctor's Jenna Davine dribbles up the field, while Mount St. Joseph's Leah Majorell (9) comes on to defend during Wednesday's game at Abatiell Field.

Big-game experience shows itself in the most crucial moments. The Proctor girls soccer team has that experience in spades.

Jenna Davine and Isabel Greb have played in many of those games, so they know the pressure. It was a Davine-Greb connection that got the Phantoms out of Abatiell Field with a win in tow, 4-3 in overtime against rival Mount St. Joseph.

Less than four minutes into the overtime period, Davine set a booming kick down the field that was perfectly placed for Greb. Greb had a contested run toward the MSJ goal and got a shot off, which hit the upper crossbar, bounced down and in for the game-winning goal.

“(Isabel) has the speed so we try and get her in good spots where she can use it,” said Proctor co-coach Chris Hughes.

“Jenna has a nice leg where she makes great passes. When we get that 1-2 going, it’s tough on any defense. The defense has to react and backtrack and Izzy can beat anybody backpedaling. It was a perfect ball.”

“I had to get the ball to her feet and put it over her head, Last game against Arlington, I had to do a kick like that as well,” Davine said.

Proctor even being in that position in overtime would have been unexpected midway through the second half.

With the game tied 1-1 at the break, MSJ snatched the momentum midway through the half. Eighth-grader Isabella Anderson found senior Lauren Costales, who put a shot through Phantoms goalkeeper Cadence Goodwin’s legs for the go-ahead score.

Costales was back at it two minutes later when she forced Goodwin off her line and buried a hard shot in the upper right corner of the net.

MSJ held strong with that two-goal advantage, but a foul gave Proctor an indirect kick deep in the box with less than 10 minutes to play.

The Mounties had everybody create a wall in front of the goal and it worked to stop Greb’s initial shot, but the sophomore headed home a rebound to narrow the deficit.

Less than five minutes later, Davine took matters into her own hands dribbling through the defense and tucking one inside the right post for the tying score.

“In those situations (where they are losing), I just work even harder,” Davine said. “We’re the type of team where even if we’re up 6-0, our coaches is always like ‘0-0’, the game is not over. We still had 22 minutes.”

“It was a lot of grit and resilience. We didn’t give up and we started to play together more. Once we play together, our skill takes over,” Hughes said.

“We get away from that from time to time. For them to come back like that, it’s a tremendous effort. It shows so much heart and guts. Everybody chipped in.”

Anderson had a nifty first-half goal, scoring with her left foot from about the 18 with Costales assisting midway through the half.

Proctor got its first-half goal from Davine. The Phantoms pushed the senior up to produce more offense and it paid off when she slotted a ball top shelf with 9:20 to play until the break.

Both goalies played well. The Phantoms’ Goodwin had 12 saves and made some great decisions to come off her line that helped thwart Mounties chances.

MSJ keeper Cindy Carranza handled a very persistent Proctor attack well in the second half. She had seven of her nine saves after the break.

“We went into it knowing we had to play our best game. It was intense,” Davine said.

The intensity and familiarity fueled both sides. That intensity will surely make its way to Taranovich Field for the rematch on Oct. 15.