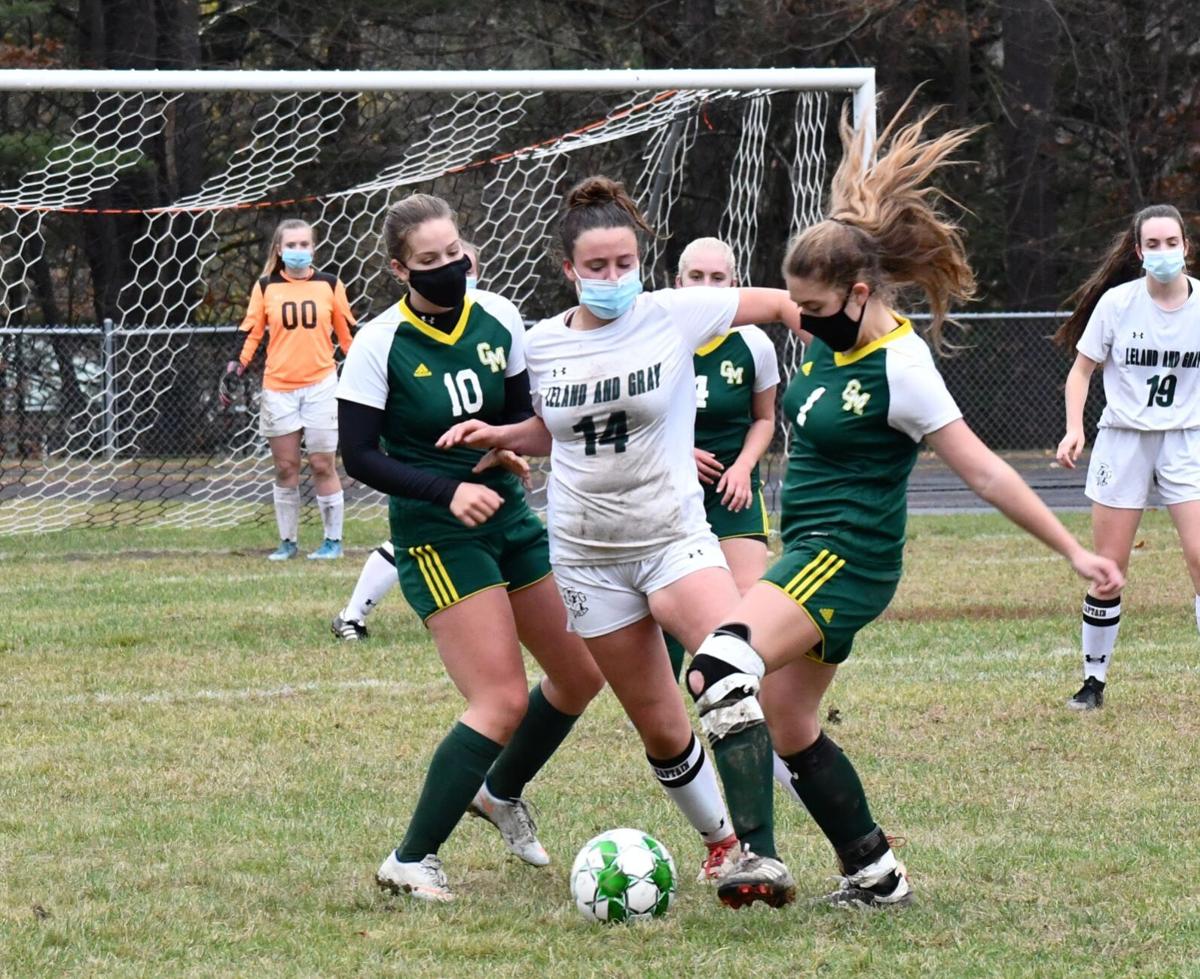 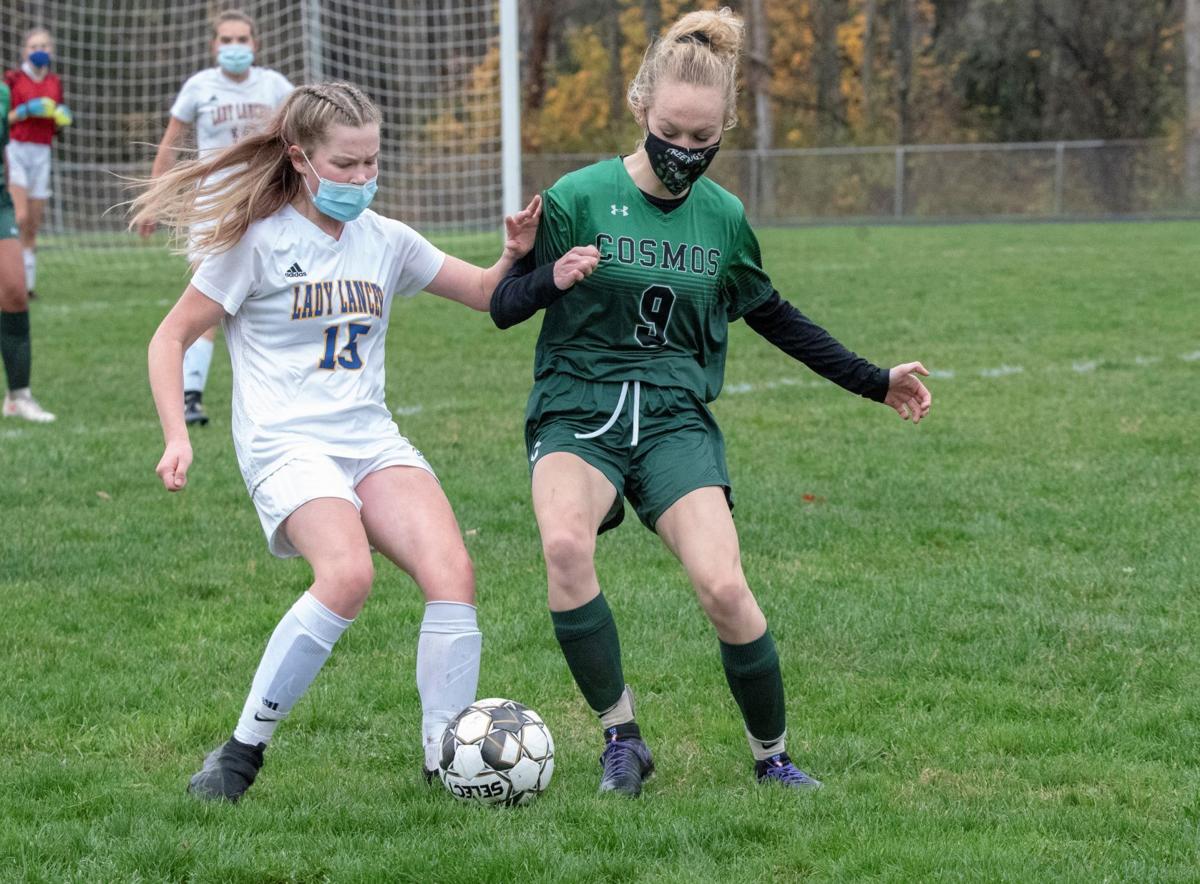 Springfield’s Mia Moriglioni tangles with a Lamoille Lancer during D-II girls soccer playoff action on Wednesday. The No. 10 Lancers found the back of the net with 2:21 in regular play to steal the 1-0 victory from the No. 7 Cosmos.

Springfield’s Mia Moriglioni tangles with a Lamoille Lancer during D-II girls soccer playoff action on Wednesday. The No. 10 Lancers found the back of the net with 2:21 in regular play to steal the 1-0 victory from the No. 7 Cosmos.

CHESTER — The Green Mountain girls soccer team is moving on to the Division III quarterfinals after a dominating performance in a 5-1 victory over Leland & Gray in a first-round game on Wednesday.

“In the first half we came out strong.We were moving the ball well and playing some nice through balls,” Green Mountain coach Carolynn Hamilton said.

Grace Tyrrell got the Chieftains started, scoring 16 minutes into the game off a through ball from Mckenzie Martin.

Abby Cole scored for the Rebels to make it 4-1 before Green Mountain freshman Abby Williams knocked in her first varsity goal.

SPRINGFIELD — Sisters Phoebe and Essie Loomis struck with late-game lightning to give Lamoille a 1-0 victory over Springfield on Wednesday in a Division III girls soccer first-round playoff game.

There was only 2:45 remaining when Essie sent a cross to Phoebe who headed in the game’s lone goal.

“It was a nice goal,” Springfield coach Ray Curren said.

The Cosmos exceeded expectations after graduating 10 seniors from last year’s team. They earned the No. 7 seed and finish with a 6-4-1 record.

The No. 4 seed Rutland girls soccer team was slated to play No. 13 Mount Anthony in the Division I playdowns on Thursday, but MAU has forfeited that game.

Rutland hosts No. 5 Spaulding on Saturday in the D-I quarterfinals.

DUXBURY — The No. 14 seed Fair Haven boys soccer team saw its season come to an end 7-0 to No. 3 Harwood Wednesday afternoon.

“We knew it was going to be a difficult game,” said Slaters coach Tim Dayton. “It was all about damage limitation. We made some mistakes, but we stuck to our plan and executed it. I have nothing to complain about with our effort.”

Dominic and Lewis Whalen both had a hat trick for the Eagles and Hunter McDermott had one goal.

It was the last high school game for MSJ seniors Jeremiah Green, Wolff Laurent and Michael Vitagliano. The No. 12 seed Mounties finish at 2-7.

NORTH CLARENDON — The Mill River football team advanced to the regional semifinals with a 35-21 win against Poultney on Wednesday.

Evan McPhee played quarterback and did well, according to Minutemen coach Greg Lewis. Dallas Bryant and Jacob Langlois were playmakers on both sides as well.

“A lot of our scores came off turnovers. We spread the ball around really well,” Lewis said.

Mill River picked off a trio of passes.

The Minutemen play Rutland on Friday at Alumni Field with a trip to the regional championship on the line.

MANCHESTER — Coach Barb Miceli’s Burr and Burton field hockey team is on a roll. After defeating U-32 7-0 in the Division II semifinals, they are on to the state championship game with an 8-1 record after outscoring their two playoff opponents by a combined 11-0.

Katie Crabtree started the scoring with an assist from Abby Farrington. Riley Callen scored with Crabtree assisting the bulldogs took a 2-0 lead to halftime.

Farrington knocked in an unassisted goal in the third quarter and then the Bulldogs exploded for four goals in the fourth quarter, two by Celsey McMahon. Arden Wojtach and Emma Hall had the others.

BBA goalie Hannah Callen only had to make three saves and U-32 netminder Kaelyn Hayward was busy, collecting 18 saves.