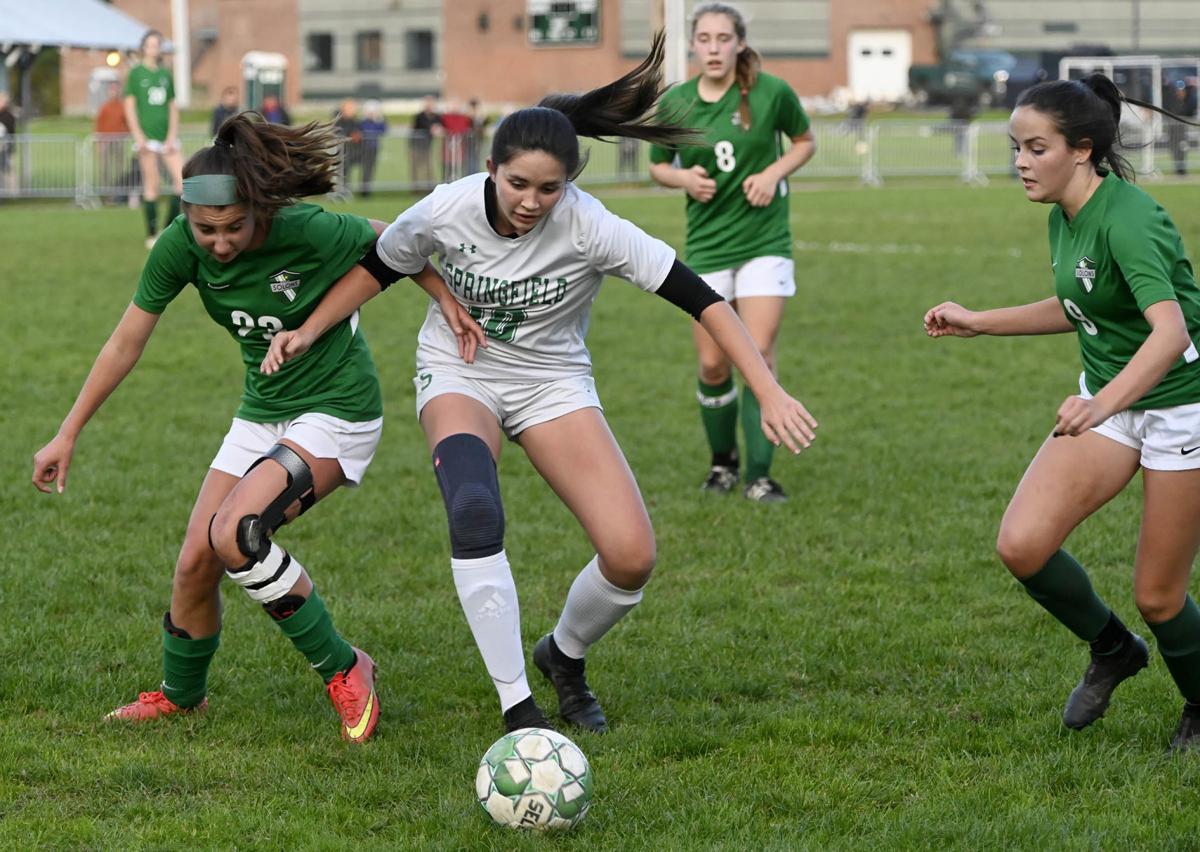 Montpelier junior Molly Hutton and Springfield junior Jill Muther contest a loose ball during the first half of their playoff game Wednesday. 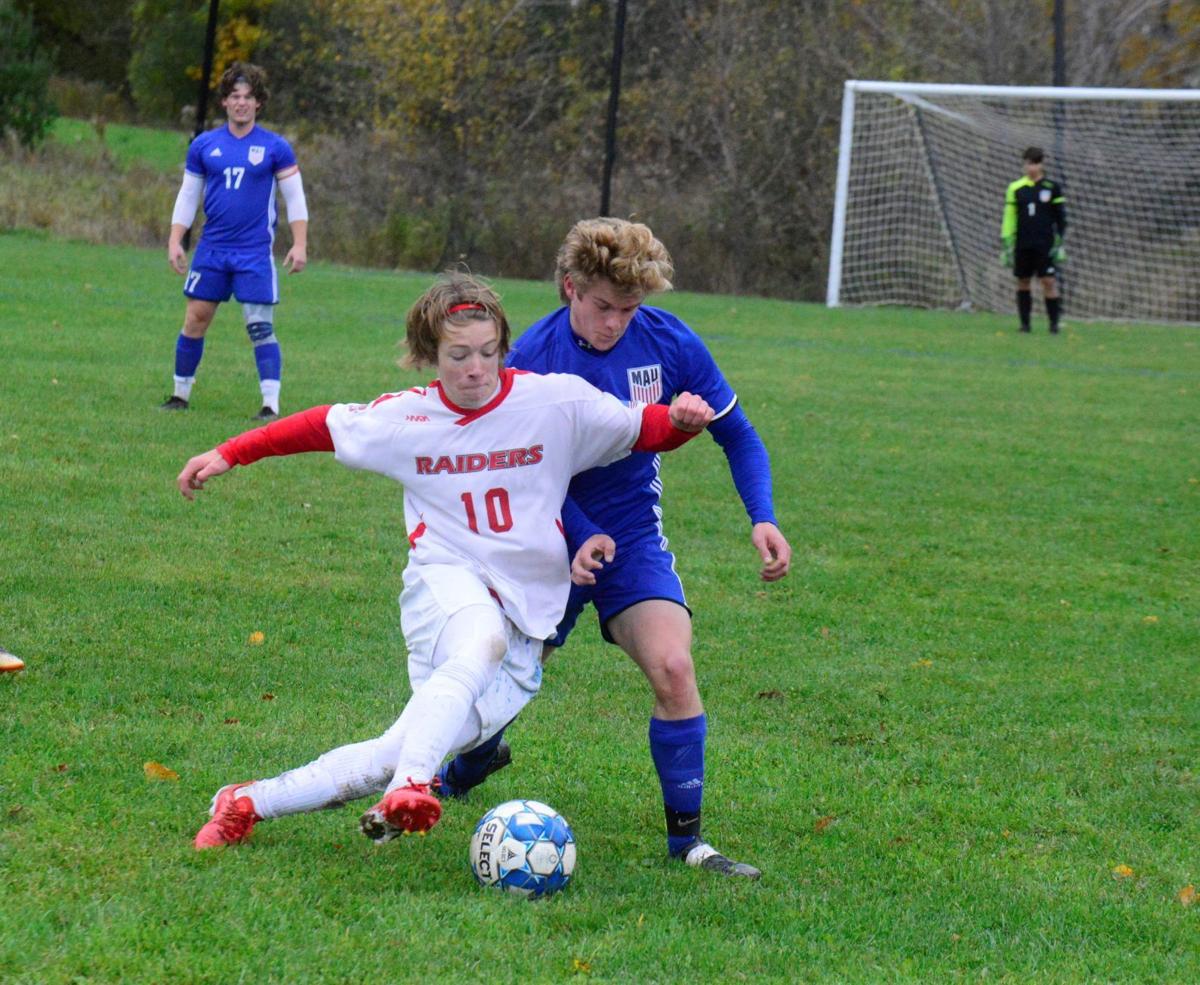 Rutland’s Ben Cerreta battles to keep possession against a Mount Anthony player during Wednesday’s Division I playdown on the field at Southern Vermont College in Bennington.

Montpelier junior Molly Hutton and Springfield junior Jill Muther contest a loose ball during the first half of their playoff game Wednesday.

Rutland’s Ben Cerreta battles to keep possession against a Mount Anthony player during Wednesday’s Division I playdown on the field at Southern Vermont College in Bennington.

WEST RUTLAND — Peyton Guay had a big first half to help West Rutland build a 3-0 lead and then finished with a 4-0 win over Twin Valley in the opening round of the Division IV girls soccer tournament on Wednesday.

In the second half, Abbey Lanfear scored, assisted by Arianna Coombs.

Serena Coombs had five saves in notching the shutout.

MONTPELIER — Springfield was locked in a 2-2 tie with Montpelier with 18 minutes remaining before the Solons kicked their game into high gear and advanced in the Division II girls soccer tournament with a 5-2 victory.

Emma Snyder and Ari Cioffi scored the goals for the Cosmos.

The No. 5 seeded Solons advance to the quarterfinals with a 10-3-1 record.

FAIR HAVEN — The No. 3 seed Fair Haven girls soccer team scored the game’s first goal against No. 14 Milton, but it was the last time the Slaters would score, as they fell 5-1 on Wednesday in a Division II playdown at LaPlaca Field.

The lone Fair Haven goal was set up by a beautiful through ball by Lily Briggs to freshman Madison Perry. Perry took a few touches down the right flank and deposited the ball into the left side of net.

Fair Haven finishes the season with a 10-3-2 record. Milton advances to play No. 11 Mount Abraham, another upset winner on Wednesday, in a D-II quarterfinal on Saturday.

POULTNEY — The Poultney girls soccer team is enjoying one of its most successful seasons in recent memory and Wednesday added another memory to that.

The No. 7 seed Blue Devils notched their first playoff win since 2008, besting No. 10 Richford 3-2 in a Division IV playdown.

The Blue Devils were up 2-0 at the half, scoring both goals on rebounds. Kate DeBonis scored the first goal, coming on a free kick play, and Hannah Welch scored the second goal.

After the Rockets narrowed the lead to one in the second half, Kaydyn L’Esperance scored the final goal for Poultney.

The Blue Devils (8-6-1) are at No. 2 Rivendell for state quarterfinal on Saturday.

DUXBURY — No. 1 Harwood bounced Otter Valley from the Division II girls soccer playoff on Wednesday with a 7-0 victory.

Harwood advances to the quarterfinals with its 13-1-1 record.

MANCHESTER — The Burr and Burton girls soccer team advanced in the Division I tournament beating Spaulding 1-0 at Taylor Field on Wednesday.

Rowan Russell scored the game’s lone goal off a corner by Daisy O’Keefe. BBA had 18 shots on goal and its keeper Abby Kopeck made two saves.

The Bulldogs are at No. 2 Colchester for a state quarterfinal on Saturday.

The game was played at the former Southern Vermont College on a field that RHS coach Ben Black did not suit the Ravens.

Even more so, it was the opponent, said Black.

“Mount Anthony is athletic and fast,” the Rutland coach said.

Black like the way his team competed even after facing a 5-0 halftime deficit.

He looks toward next season with optimism.

“We will miss the seniors. They are good players and good character citizens, Black said.

“But there is some good talent in the sophomore and junior classes.”

PITTSFORD — Richford’s Jonas Lagasse scored via Nick Joyal’s assist with five minutes remaining to lift Falcons into a 1-0 victory over Proctor and a trip back to Rutland County to play No. 1 Mount St. Joseph in the Division IV boys soccer tournament.

“I thought we played alright. We had a number of chances,” Proctor coach Chad Wilson said.

“It was a tough way to end,” Wilson said.

WHITINGHAM — The No. 5 seed Twin Valley boys soccer team advanced in the Division IV tournament with a 5-1 win against Danville on Wednesday.

Caleb Dupuis led the way for the Wildcats with three goals. His first came off an assist by Aiden Joyce in the 4th minute and the next was assisted by Carson McHale in the 34th minute.

Joyce assisted on Dupuis’ third goal as well after the half. Joyce sent a beautiful cross and Dupuis headed it home.

Luke Rizio made a big hustle play in the 51st minute to beat the Danville keeper to the ball and score TV’s fifth goal. Cody Magnant got the assist.

JERICHO — It was a long ride for Rutland to Mount Mansfield Union High and a longer ride home as the Ravens fell to MMU 4-0.

The Ravens stayed with an MMU team that Rutland coach Karen Poljaick felt was far better than its record.

The Ravens trailed just 1-0 at the half.

“They had very good passing. I would say that they were much better than their record,” Poljacik said.

Poljacik credited Elizabeth Franzoni with a strong game in her last contest in the Rutland uniform.

“She played well back there when we were under a lot of pressure. She cleared the ball out of the circle many times,” Poljacik said of Franzoni.

Castleton’s Jamie Bartlett opened the scoring in the first minute on assist by Rylee Nichols. Nichols scored the game’s next two goals, both assisted by Julia Carone.

Carone scored the final goal of the first half on a penalty kick.

Jordan Mattison netted the first second-half goal in the 52nd minute on a penalty kick, before a pair of goals from Chase Livesey coming in the 79th and 82nd minutes off assists from Izzy Scott and Rylee Pepin respectively.

Castleton (8-4-4) wraps up the regular season Saturday at UMass Boston.

The Owls scored six goals across the second and third quarters. Ellie Hunkins and Irini Stefanakos had a pair of goals in the game for Keene.

Emily Harris and Payton Barlow had a goal for Castleton.

CASTLETON — The Castleton University women’s volleyball team dropped a 3-0 decision to Plattsburgh State on Wednesday, losing by set scores of 25-23, 25-21 and 25-12.

Hailey Martinovich led the Spartans with 10 kills, followed by Lizzie Goodrich with seven.

Castleton (5-17) has two more matches on the regular season schedule, Friday against Fisher College and Saturday against UMass Boston. Both matches will be played in Boston.