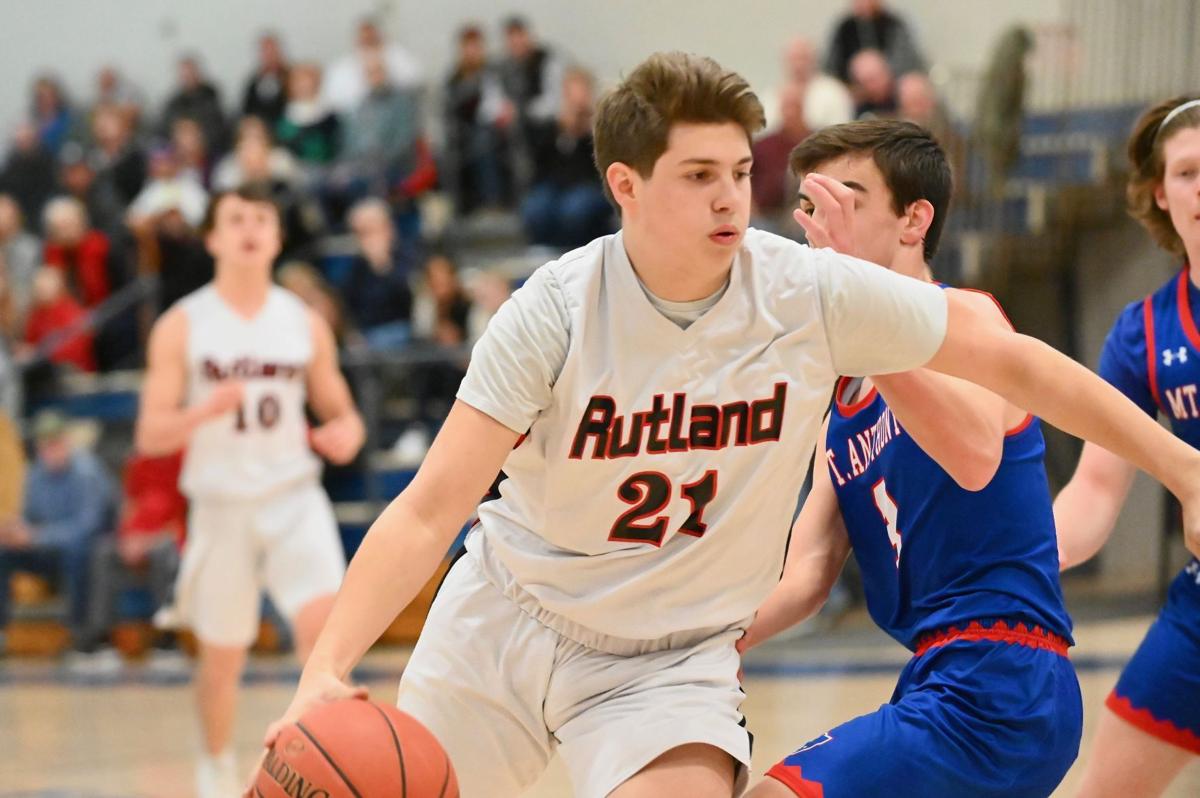 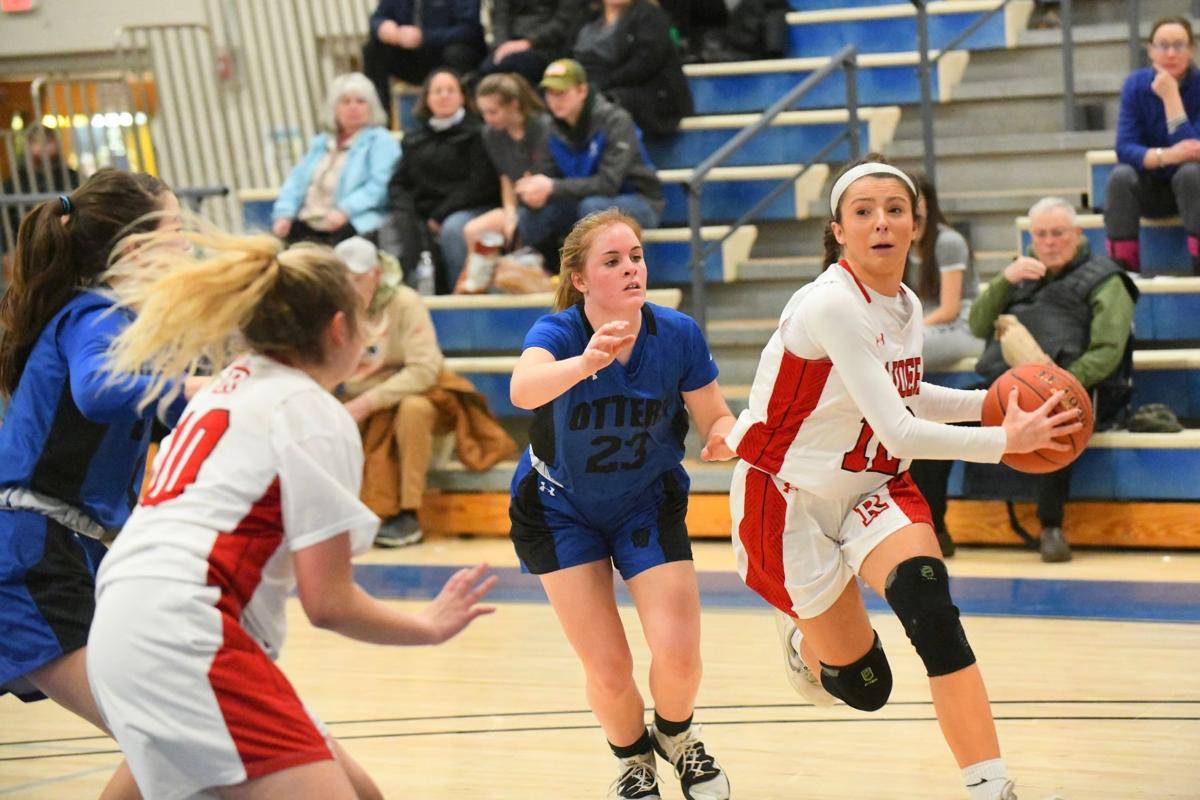 Rutland’s Kendra Sabotka (12, left) drives to the net defended by Otter Valley’s Alice Keith (23, center) during their matchup at the College of St. Joseph.

Rutland’s Kendra Sabotka (12, left) drives to the net defended by Otter Valley’s Alice Keith (23, center) during their matchup at the College of St. Joseph.

The newly-refurbished floor of Keefe Gym is finally getting some sneaker marks to break it in.

The Rutland boys and girls basketball teams are hard at work putting in preparation for the 2021 campaign, a season where both clubs are hoping to make noise.

For the Raider boys, it’s about regaining their spot among the state’s elite, and for the Rutland girls, it’s about building off one of their most successful seasons in recent memory.

Both teams return plenty of experience that could make those goals a reality.

GIRLSRutland was on the brink of a trip to Patrick Gymnasium to play heavily-favored CVU in the Division I semifinals, before the rug was pulled out from under them.

COVID-19 was beginning to hit the country hard, and before they knew it, the remainder of the girls basketball playoffs was wiped away.

The Raiders were named as D-I quad-champions, but they were left to wonder what was next. What’s next, this winter season, is different, but it’s something they’ll cherish.

With contact practices given the go-ahead to start this week, Rutland was excited to get going.

“They’re super happy. We haven’t been able to do a ton since we exited before the final four last winter,” said Rutland girls coach Nate Bellomo. “A weight was lifted off their shoulders when they allowed the individual workouts and another one was lifted when we could go live.”

Bellomo has given the girls more of a chance to scrimmage during these early contact practices because it’s something they had missed out on.

“We treated those non-contact practices similar to how we do our summer workouts,” Bellomo said. “It ended up being good because we could decrease injuries and get in the right mindset.”

Rutland graduated two seniors. Center Rylee Burgess represents the biggest loss. The 6-footer, who is now suiting up for Keene State, was a matchup nightmare and her shoes won’t be easy to fill.

“Rylee did a lot for us not only as a player, but as a leader. Teams really had to game plan for us,” Bellomo said.

Bellomo sees this team as more of a guard-centric club and they should be set in that regard. The Raiders lose Sarah Ferrara, who recently moved, but return senior Kendra Sabotka and sophomore Karsyn Bellomo.

Sabotka has experience in spades and was the Kobe to Burgess’ Shaq last year, providing a strong shooting threat and driving skills, while being a great distributor from her point guard spot.

Karsyn Bellomo developed nicely in her first year on varsity and could take an even larger step with a more integral role in the offense.

“We’re still a pretty young team, but all these girls got a lot of reps last year,” coach Bellomo said.

Senior Makieya Hendrickson is a returning starter and provides plenty of big game experience. Fellow senior Cecily McCormack and junior Kathryn Moore don’t have a ton of height, but are spark plugs for the Raiders.

Girls who impressed on junior varsity like Kenzie McLaughlin, Mia Marsh and Mattie Peters should find roles on varsity this year as well.

“All those girls are one year more mature and stepping in and filling roles,” Bellomo said.

“Overall, all the girls have been working hard. We’re finding out who we are.”

Heading into last year, the Raiders had been to the D-I state championship game three years in a row and won it twice.

With a much less experienced club in 2019-20, Rutland fell short of that mark, but they’re determined to work their way back to the elite level.

“We had a lot of games last year that we were in but we didn’t close out,” said longtime Rutland boys coach Mike Wood. “Last year left a sour taste in our mouth. It was humbling.”

A new season means a new chapter and Wood is excited for what this team could write.

“There was a ton of excitement when we got the OK to go full. The energy has been really positive. The kids really needed this,” Wood said.

Seniors Evan Pockette and Noah Depoy will be leaders on the 2021 squad and critical pieces to the Raiders’ success.

“Evan and Noah will lead us and we have a great group of sophomores and juniors to build around,” Wood said.

Sophomore Eli Pockette was impressive as a freshman and eventually worked his way into a starting role last season. He’s back to team with his older brother this winter.

Junior Jack Coughlin was another guy who earned his way into a regular role last season. Fellow junior Trey Davine provided size for Rutland, but is out with a torn ACL this season.

Wood is excited for what he has in junior Slade Postemski, who is coming off a great 7-on-7 touch football season.

“Slade is probably the best athlete we have,” Wood said. “He played a lot with the JV team last year.”

Owen Traynor, Luke DelBianco are two other guys from the Raiders’ JV team that will make the varsity jump. Mill River transfer Tyler Weatherhogg is another player who will find a role.

“We’ll play a lot of young guys and let them get their feet wet,” Wood said.

Nobody knows what to expect of this mid-pandemic hoops season, but Rutland is taking it in stride.

“There’s definitely a level of stress to it. You just never know, whether someone in your program or another program (has been exposed to COVID),” Wood said. “Hopefully, we’re back to games soon.”