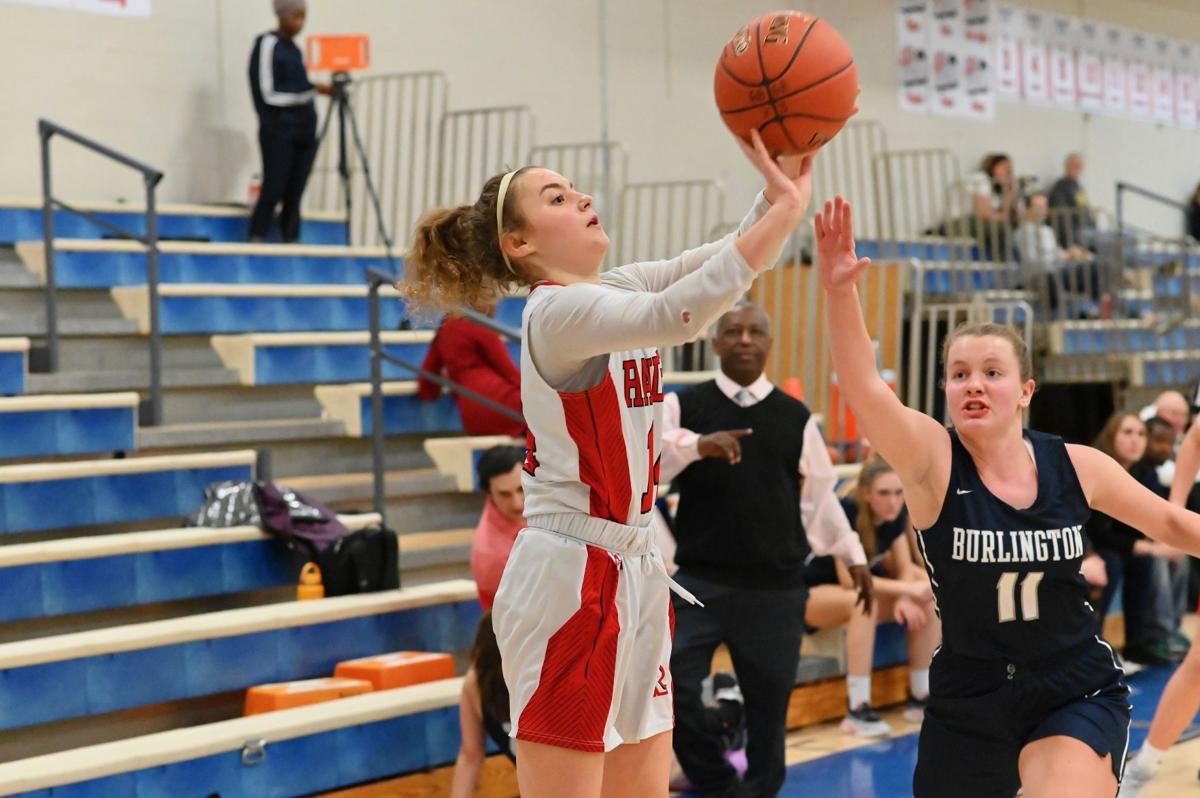 Rutland High School’s Sarah Ferrara (14, left) throws up a 3-point shot in the first half as Burlington’s senior guard Ella Becker (11) applies pressure during their Friday night matchup at the College of St. Joseph. 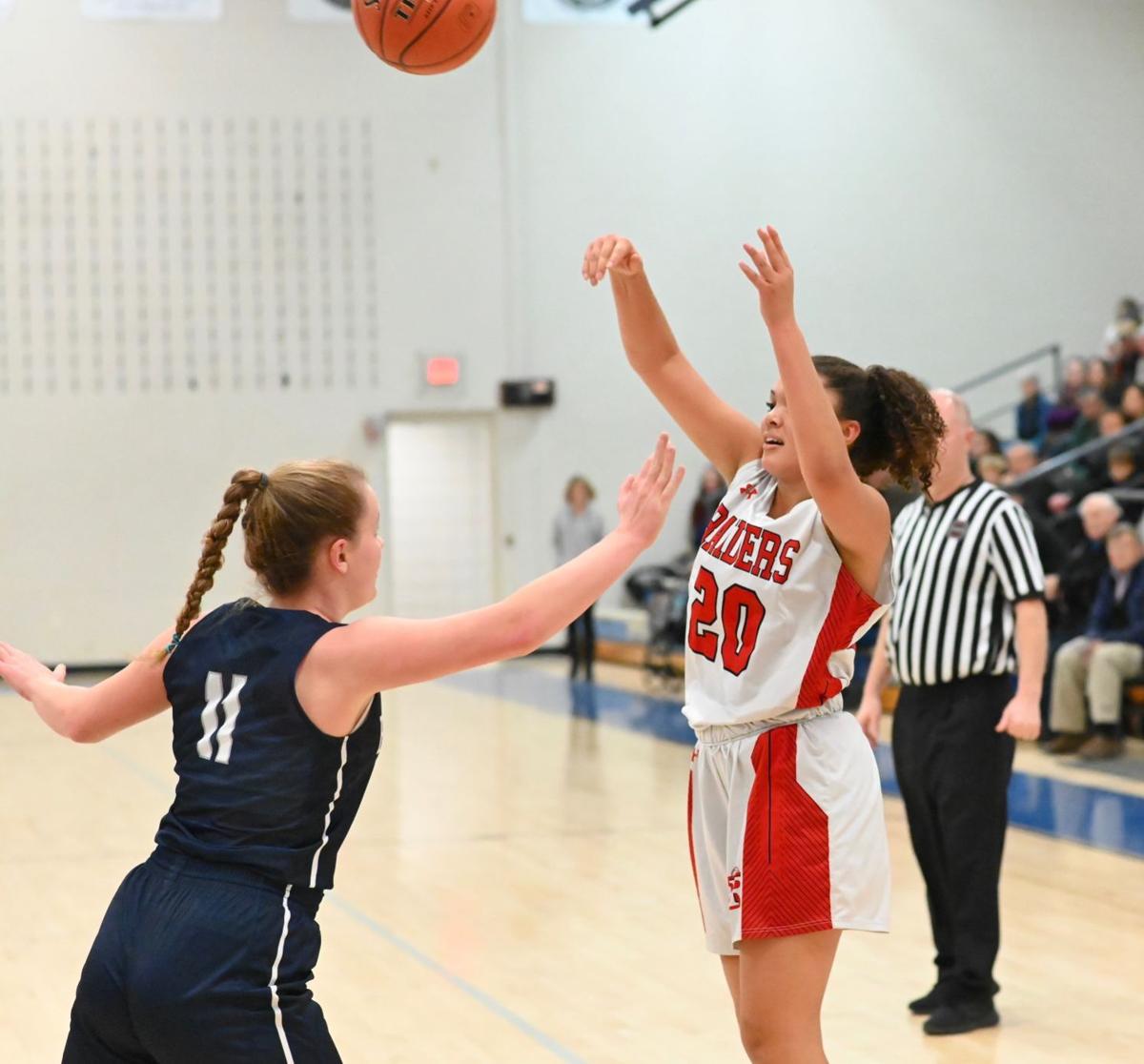 Rutland High School’s Makieya Hendrickson (20, right) throws up a 3-point shot in the first half as Burlington’s senior guard Ella Becker (11) applies pressure during their matchup at College of St. Joseph.

Rutland High School’s Sarah Ferrara (14, left) throws up a 3-point shot in the first half as Burlington’s senior guard Ella Becker (11) applies pressure during their Friday night matchup at the College of St. Joseph.

Rutland High School’s Makieya Hendrickson (20, right) throws up a 3-point shot in the first half as Burlington’s senior guard Ella Becker (11) applies pressure during their matchup at College of St. Joseph.

Kendra Sabotka was the top scorer of the game with 15 points. Teammate Rylee Burgess followed closely with 14 points.

The Phantoms dominated from the opening tip, leading 35-3 at the half. The Chieftains mustered just one field goal across the first 16 minutes.

Allie Almond led Proctor with 14 points and Maggie McKearin had 10. The Phantoms got a balanced scoring attack around that pair.

Proctor improved to 7-1 with the win.

The Wasps stayed with the Cosmos throughout the first half, trailing by only one point. Springfield’s offense stepped up, however, and outscored their opponent 23-5

“We out in on in the fourth quarter and pulled away,” said Springfield coach Pete Peck.

Gabby Wardwell had 29 points to lead Springfield, while Hailey Perham had 11.

The Cosmos improve to 7-1 and play Otter Valley on the road Tuesday.

The Minutemen grabbed an 8-0 lead to start, but the Terriers held a slight advantage at the end of the first.

Bellows Falls began to pull away, however, and led Mill River by 15 points at halftime.

The game started dead even, as the teams were tied at 13 after the first quarter. Both teams remained close, with the Eagles holding only a one-point lead going into the fourth.

A short range floater by Liam Kelliher put the Eagles up with three seconds left to play, and gave them the win.

Parker Todd had 16 points for Otter Valley, while Dylan Gaboriault.

Kelliher had 18 points for Mt. Abe.

The Comsos put up a fight, trailing the Slaters by only four points at the end of the first. Fair Haven’s offense stepped it up, however, and outscored Springfield 41-13 in the next two quarters.

Noah Zierfus was the top scorer for Springfield with 17 points.

Fair haven improves to 11-0 and plays again Friday at 7 p.m. to take on Windsor. The Cosmos dropped to 4-5.

The Mules scored immediately after tip-off with a layup by Noah Tyson. Colby continued to move past Middlebury’s defense and extended its lead to eight points.

The Panthers never backed out and successful layups by Jack Farrell and Tommy Eastman dropped the deficit to four with 14 minutes left in the half.

Both teams exchanged jump shots and layups, and the Panthers kept the Mules’ lead in the single digits. A three-pointer by Eastman narrowed the gap to one point.

The Panthers’ offense began to slow down, however, and Colby extended their lead into the double digits. Middlebury did not back out, however, and the Panthers cut the Mules’ lead to five points at the end of one half.

Going into the second half, another layup by Tyson got the Mules quickly out of the starting gate. As Colby pulled away, Middlebury pulled back.

The Panthers could not overtake the Mules, however, and both teams continued to exchange shots. Middlebury was never down by more than 11 points, however.

Middlebury’s luck seamed to turn around, as three-pointer and layup by Farrell gave the Panthers the lead with six minutes left in play. This was short lived, however, as free throws by Matt Hanna tied the game at 71, and the Mules eventually retook the lead.

Down by five points, the Panthers called a full timeout with 1:16 left in the game. Fouls proved costly for Middlebury, though, and the Mules extended their lead to 10.

Although the Panthers continued to fight, Colby walked away with the win.

Alex Dorion was the top scorer of the game with 23 points and four rebounds.

The Panthers drop to 15-2 and play again Saturday at 3 p.m. against Bowdoin.

The Pilgrims scored forst with two goals in the first period. The Spartans evened out the score with a lone goal by Anton Tarvainen and an early third period goal by Sam Rennert.

New England retook the lead eight minutes in the final period, and the Pilgrims sealed the win with a goal in the last two minutes of regulation.

Tarvainen and Rennert registered one goal each for Castleton. Brandon Collett made 50 saves at net.

The Spartans drop to 5-10-2 and hit the ice again Saturday at 4 p.m. when they take on Southern Maine.

Mikell became the first player in program history to be named to an All-American Team, as he also earned a Second Team D3baseball.com nod back in 2019.

The senior from Williston led the Little East Conference (LEC) last season with a .446 batting average, which also ranked 11th in the nation.

Along with his stellar batting average, Mikell reached base at .552 clip to lead the conference and rank seventh in Division III.

He finished the season with 62 total hits, including 10 doubles, two triples and six home runs for a slugging percentage of .676, ranking him third in the LEC.

He also recorded hitting streaks spanning 16 and 22 games, while recording a hit in 33 of his 38 games.