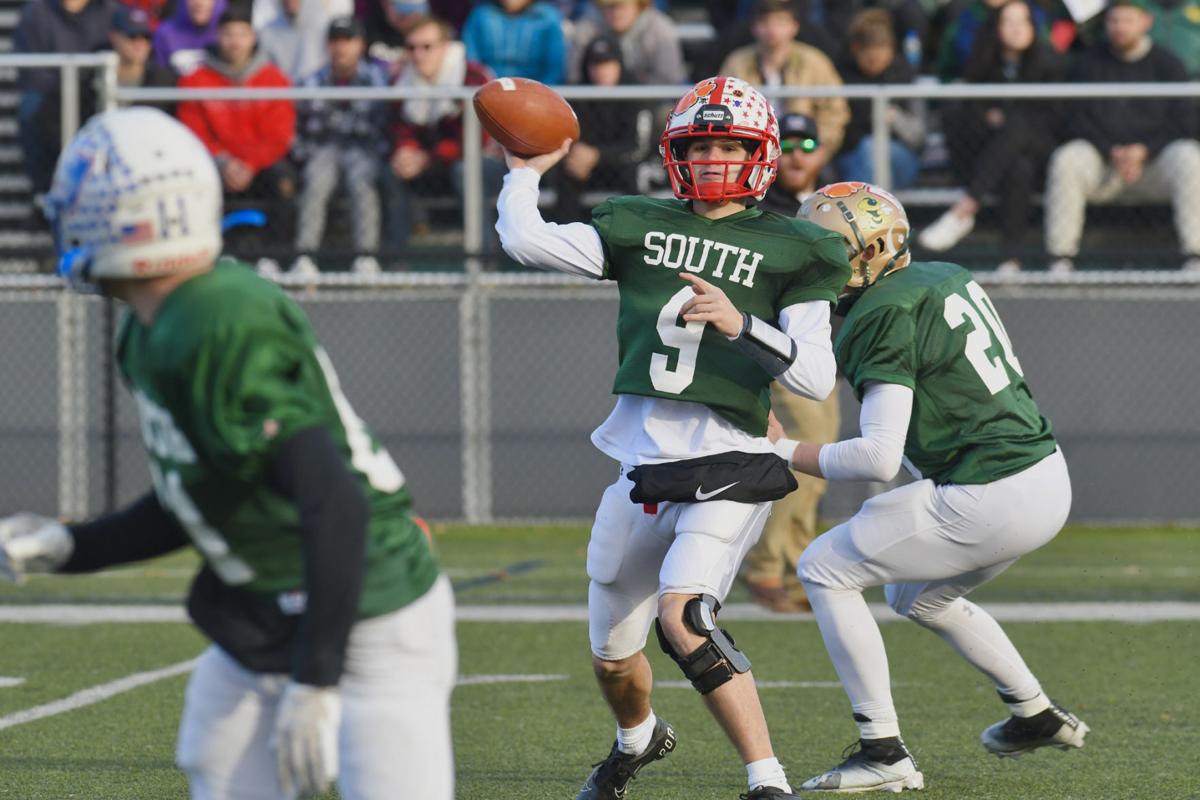 South quarterback Trey Davine (9) of Rutland makes a screen pass in the third quarter during the 2021 Vermont North-South All Star Football Game held at Dave Wolk Stadium on the Castleton University campus. 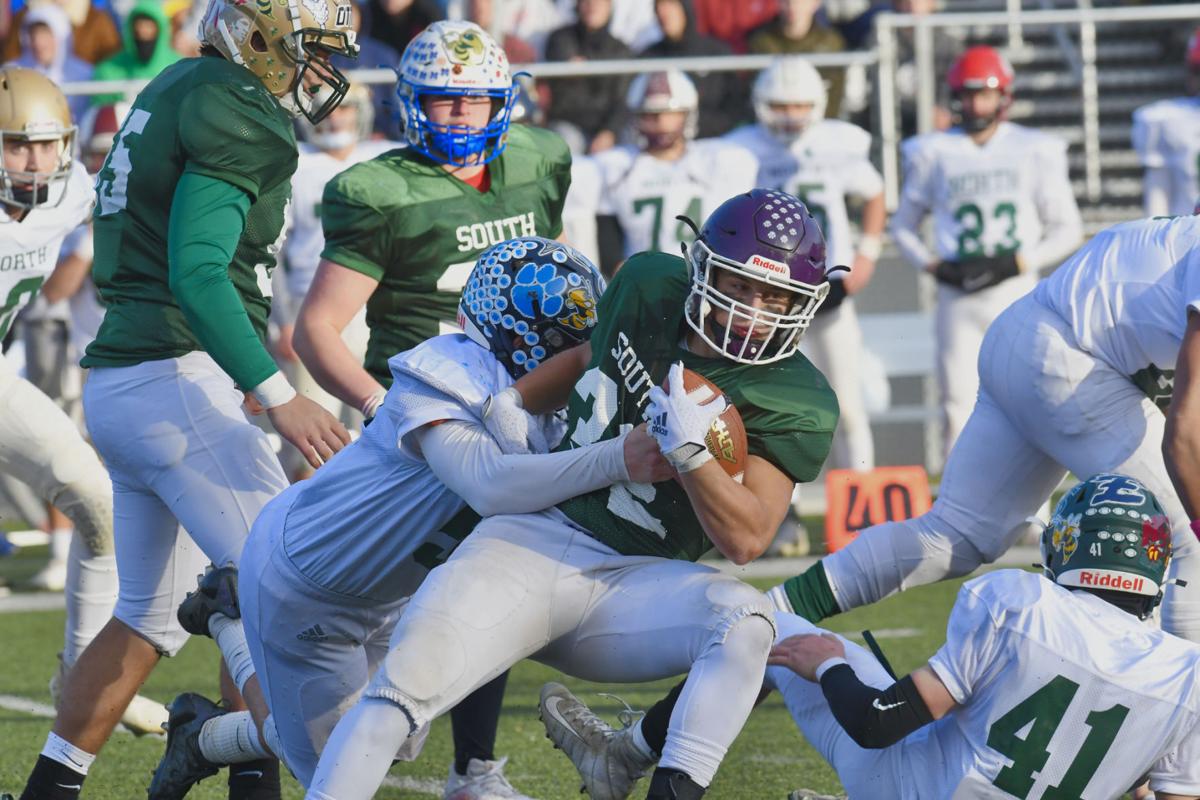 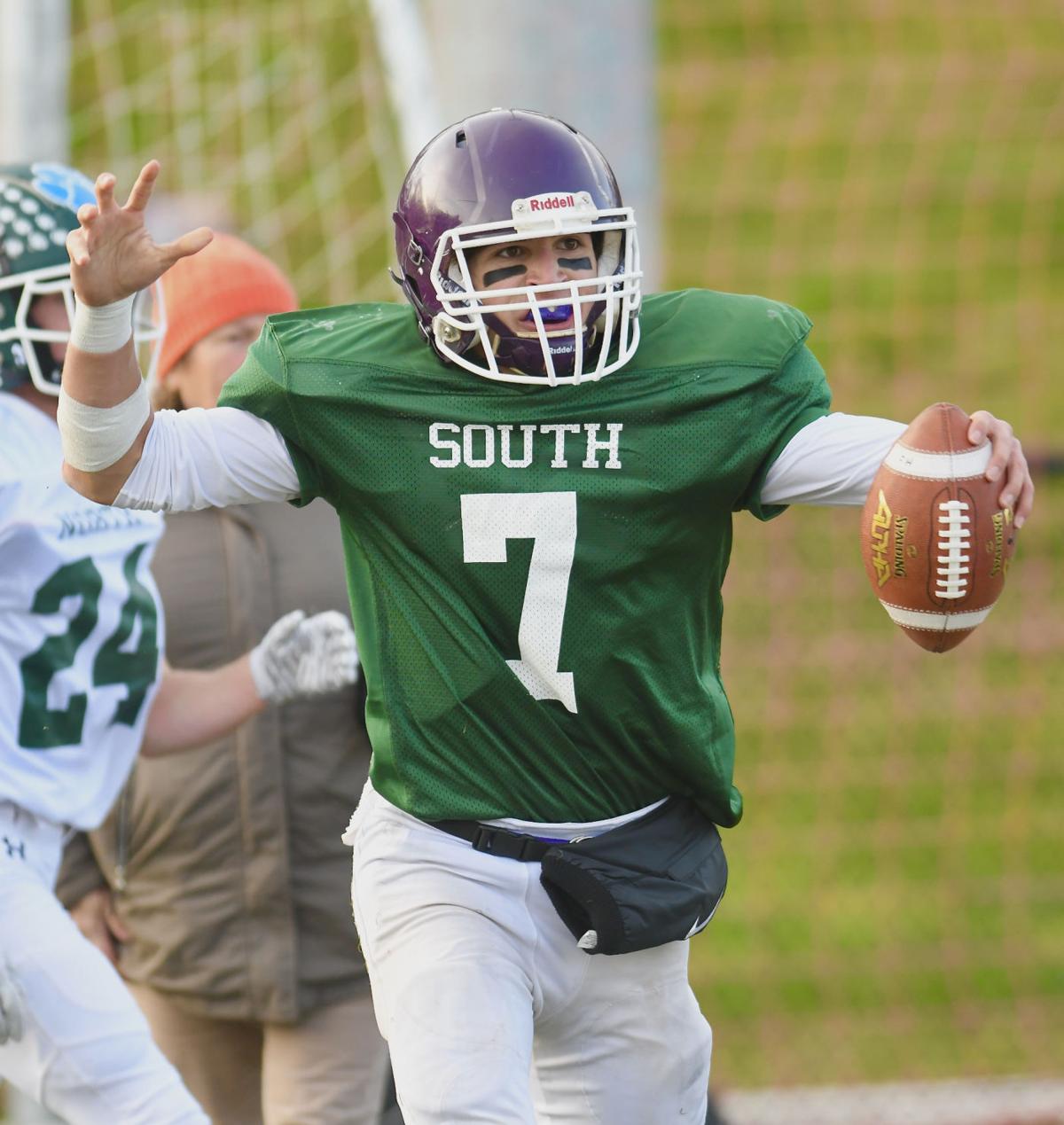 South quarterback Jon Terry (7) of Bellows Falls celebrates after a touchdown run in the second half during the 2021 Vermont North-South All Star Football Game held at Dave Wolk Stadium on the Castleton University campus. 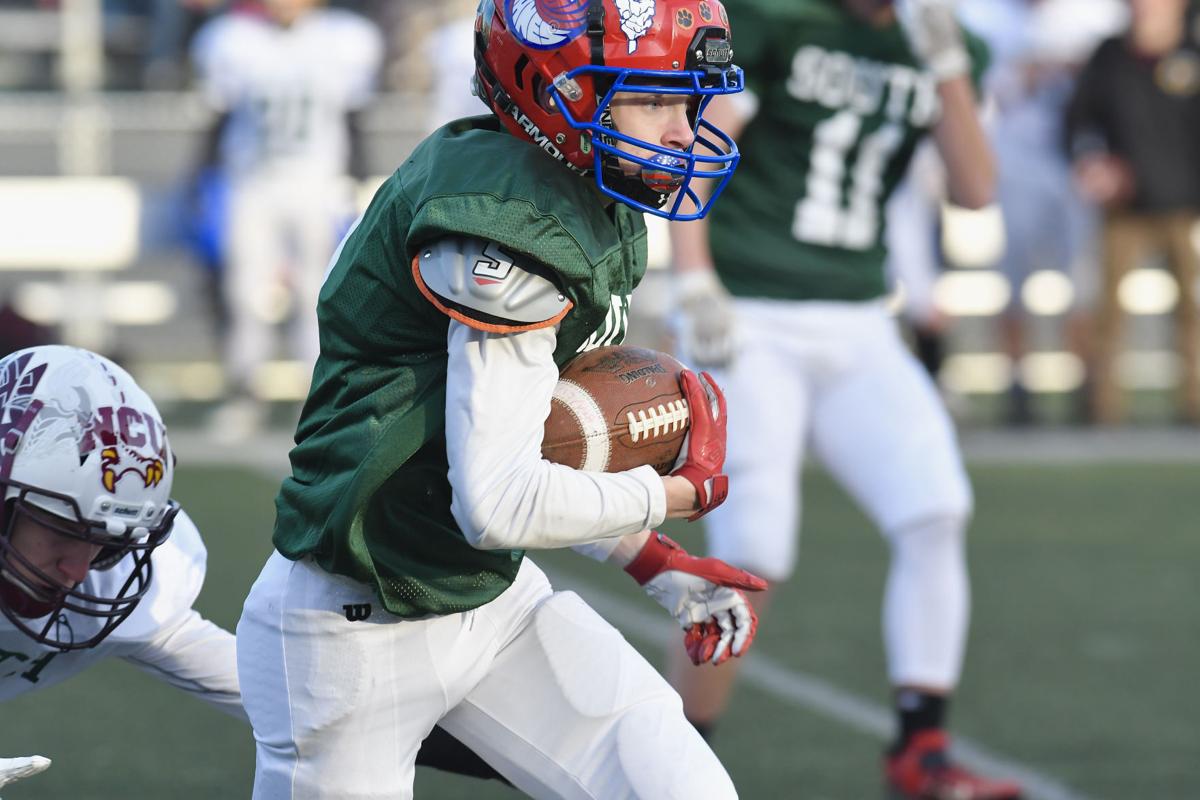 South wide receiver Tarin Prior (8) of Hartford runs with the ball after a completion during the 2021 Vermont North-South All Star Football Game held at Dave Wolk Stadium on the Castleton University campus. 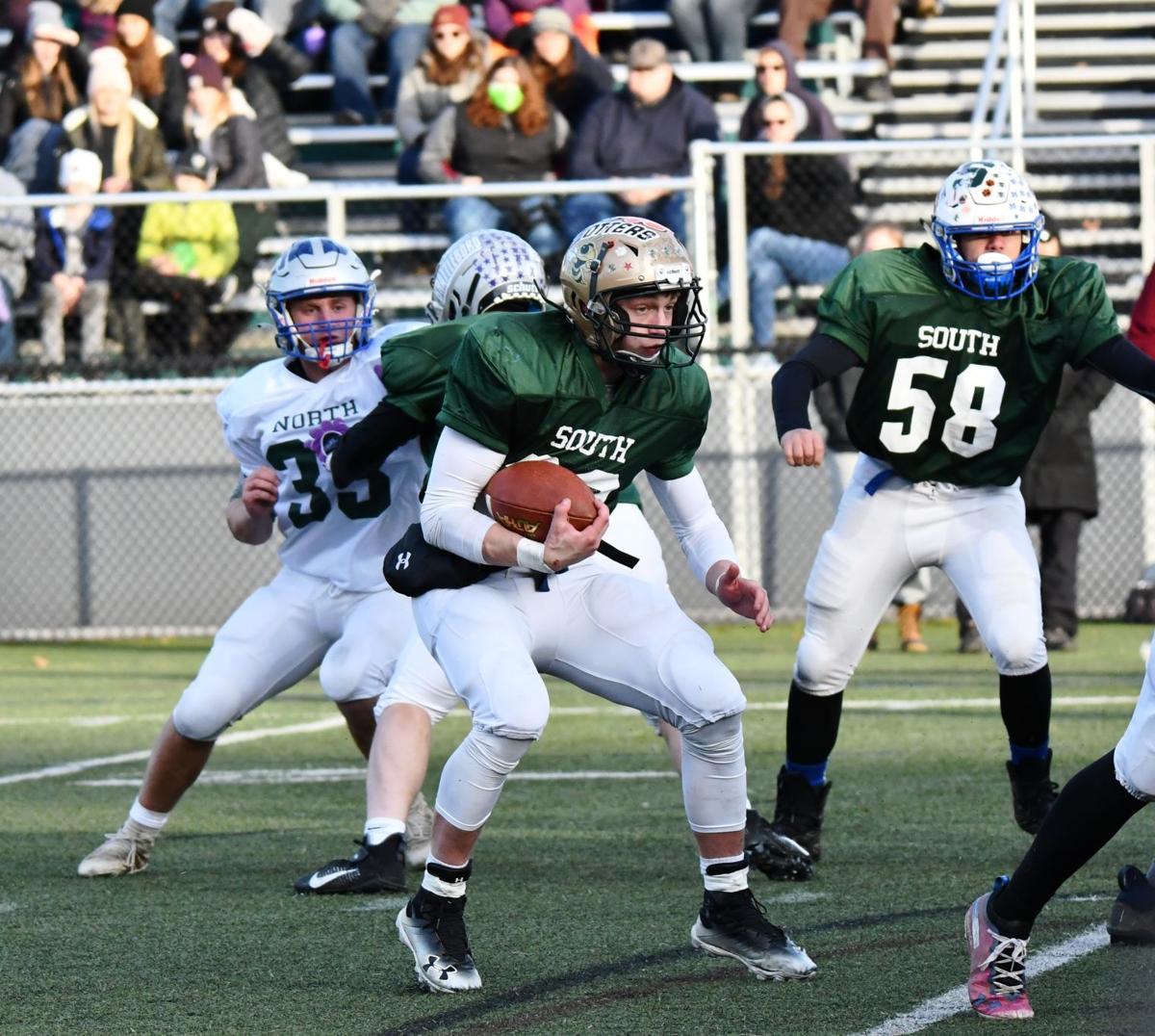 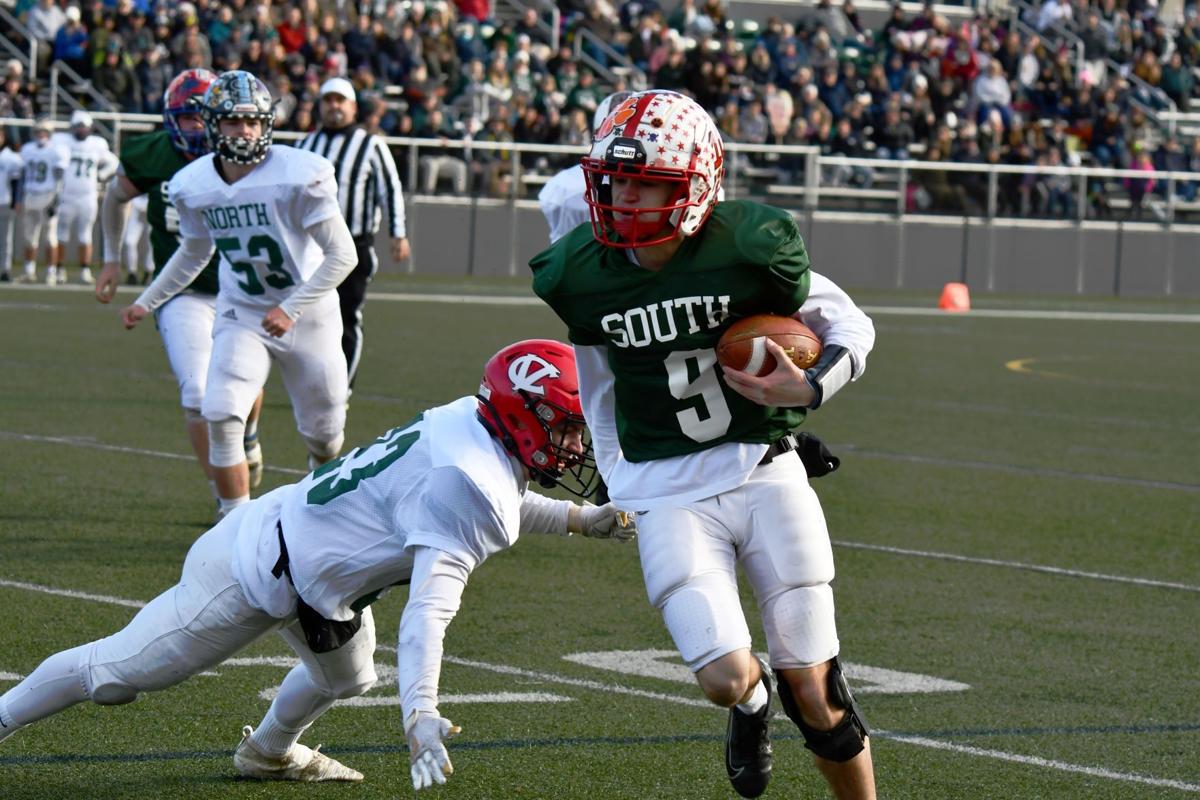 South quarterback Trey Davine (9) of Rutland makes a screen pass in the third quarter during the 2021 Vermont North-South All Star Football Game held at Dave Wolk Stadium on the Castleton University campus.

South quarterback Jon Terry (7) of Bellows Falls celebrates after a touchdown run in the second half during the 2021 Vermont North-South All Star Football Game held at Dave Wolk Stadium on the Castleton University campus.

South wide receiver Tarin Prior (8) of Hartford runs with the ball after a completion during the 2021 Vermont North-South All Star Football Game held at Dave Wolk Stadium on the Castleton University campus.

CASTLETON — In a game where offense was aplenty, defensive plays were crucial in the annual North-South All-Star football game, making its return on Saturday, following a year hiatus due to COVID-19.

The South team came up with a big play on defense when it needed the most and bested the North team 39-35 at Castleton University’s Dave Wolk Stadium.

“Both teams played hard. It was what we were looking for,” said South coach Jim Hill, who is also the head coach at Fair Haven Union High School. “Players make plays and I had a team full of players. So did (the North).

“We were fortunate to be able to come out on top and it feels good to be a victor in the last game of the 2021 Vermont high school football season.”

Hartford’s Tarin Prior made sure the South was going home with the win. He picked off an Adam Mansfield pass with less than 30 seconds to play to get the job done. It was his second interception of the day and fourth for the South defense.

It was plays like those that gave the South team a slight edge in a game that was as back and forth as they come.

Another critical play for the South was early in the fourth quarter when the North team was driving inside the South 10-yard line. The South team came up with a handful of stops and stuffed the North at the line to cause a turnover on downs.

“You’re a little handcuffed in this game (defensively). You can’t blitz and you can only run a four-man front, so it’s supposed to be a 39-35 game,” Hill said. “Our defense made plays. There were some big plays when we needed them.”

The North team struck first in the opening quarter after the South side stalled out near midfield.

Amari Fraser was a workhorse running back for Burlington/South Burlington this fall and he showed that on the opening drive and throughout the opening half. Fraser carried the ball six times on that drive and finished it with a 7-yard touchdown run.

Fraser carried the ball 16 times in the first half alone and finished the day with 23 carries for 118 yards.

Once the North broke the seal of the goal line, both sides started putting up points in bunches.

The North came back with a 1-yard touchdown scamper by Mount Abraham’s Mansfield to take the lead again.

Rutland’s Trey Davine matched Mansfield with a 20-yard TD keeper of his own on the next drive, slithering through a handful of potential North tackles to do so.

That play was set up by a great connection down the left sideline to Mount Anthony’s Austin Grogan that got the South in the red zone.

Fraser toted the ball for his second touchdown on the next drive for the North and the Mount Anthony’s Hayden Gaudette found paydirt to cut the North lead to one, due to a failed point after attempt.

The South stopped the string of scoring drives on forcing the North into a 3-and-out.

The South made quick work of its next drive due to the magic of Davine. Rutland football fans saw all season long how creative Davine can be under center and it showed in a big way on this late first half drive.

Davine connected with his favorite target and RHS teammate Slade Postemski to get well into North territory.

After a 7-yard pass to Dylan Stevens-Clark, the North got heavy pressure on Davine on the ensuing drop back.

Davine used his legs to avoid the pressure rolling out to his right and uncorked beautiful ball down the right side of the field that Postemski caught in the end zone for a go-ahead score.

“I was rolling right and I saw Slade had a little step on (the defender) so I threw it,” Davine said.

“(Trey) is a give him the ball and get out his way type of kid,” Hill said of the quarterback at his alma mater Rutland High. “He didn’t even know who caught it when he came off. Those are two guys that have been playing together for a long time and they’re on the same page.”

Davine threw for 154 yards, which tied for the game-high with Mansfield.

Both sides scored out of the half. The North scored on a beautiful 68-yard pass from Mansfield to Colin Mathis and the South responded with a Jeb Lober touchdown run to make it 32-28 and the score stayed that way through the end of the third due to interceptions for Prior and the North’s Cameron Comstock, of U-32.

Mansfield threw his second touchdown of the day with 7:45 to play in the fourth to St. Johnsbury’s Sam Begin and the South responded with a 7-yard TD keeper by Bellows Falls’ Jon Terry.

A Robby Macri interception looked like it would ice the game in the closing minutes, but the North defense stepped up to cause a turnover on downs in the red zone with less than a minute to play.

The game was officially put away on Prior’s second interception.

It was the second straight time the South has bested the North, having won 47-9 in 2019 to snap a five-year run of North victories.

“I wish we could have got the ‘chip, but this will do,” Davine said.