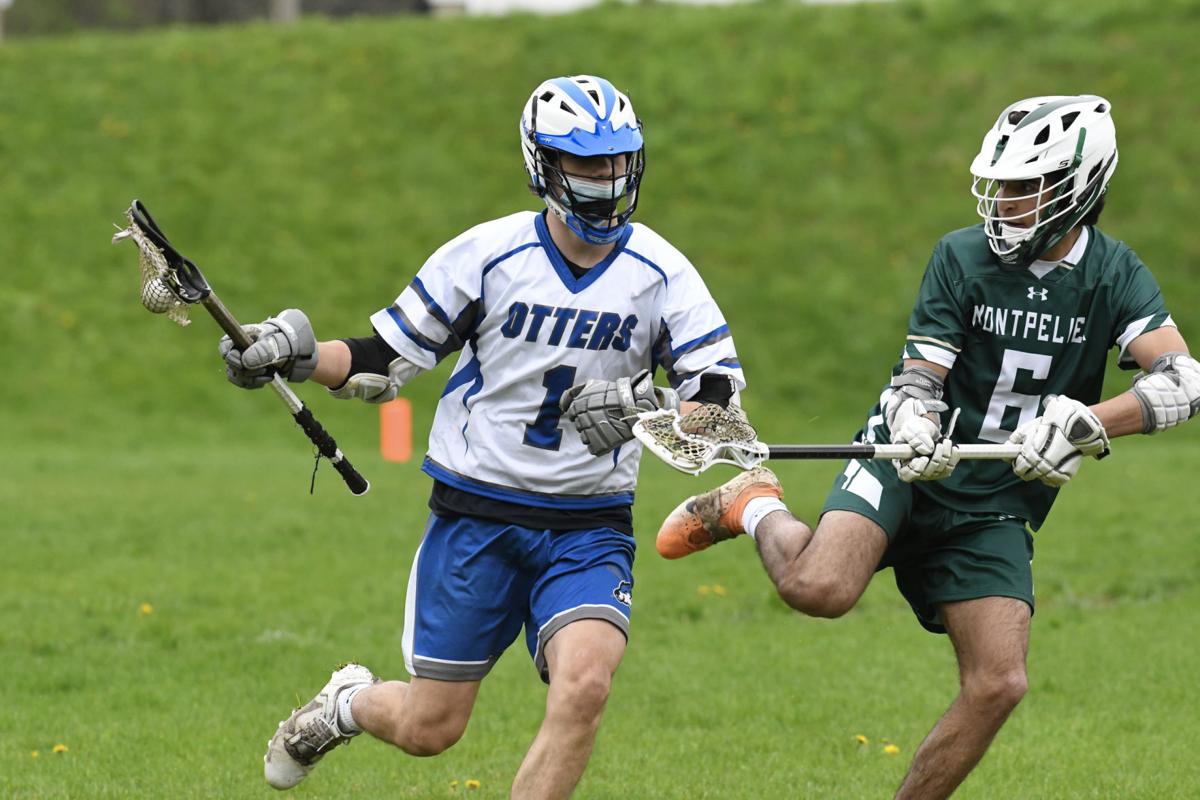 Montpelier’s Sina Fallahi (6) challenges Otter Valley’s David Williams (1) for control of the ball during their Tuesday matchup at Markowski Field in Brandon on Tuesday afternoon. 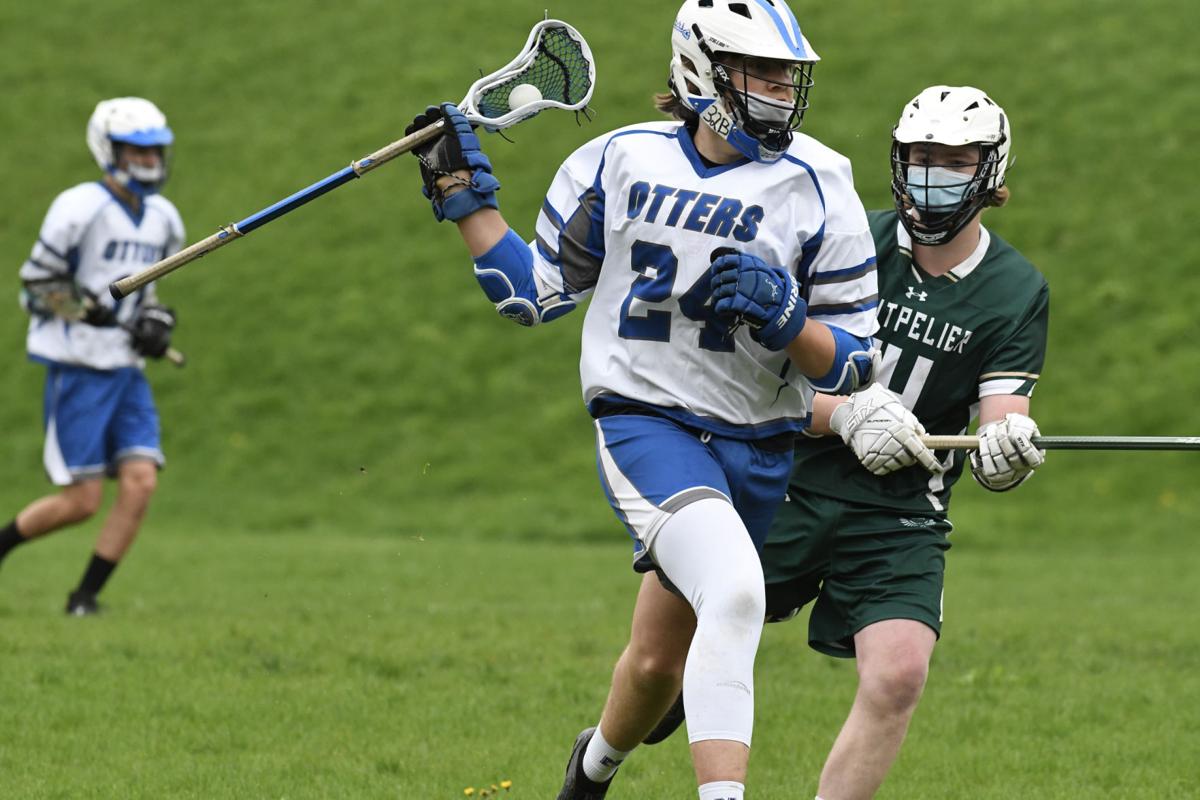 Montpelier’s Henry Lumbra (14) challenges Otter Valley’s Hayden Bernhardt (24) for control of the ball during their Tuesday matchup at Markowski Field in Brandon on Tuesday afternoon. 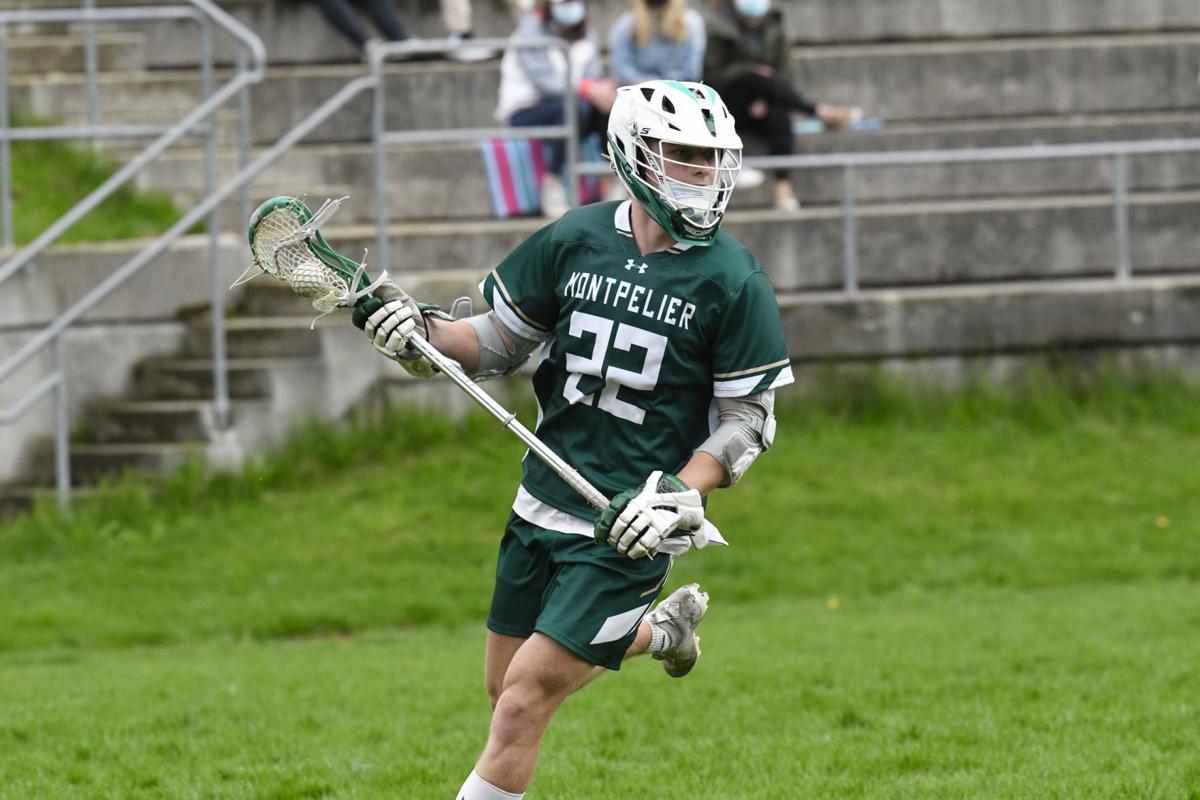 Montpelier’s Quinn Mills (22) readies for a shot while playing Otter Valley at Markowski Field in Brandon on Tuesday afternoon.

Montpelier’s Sina Fallahi (6) challenges Otter Valley’s David Williams (1) for control of the ball during their Tuesday matchup at Markowski Field in Brandon on Tuesday afternoon.

Montpelier’s Henry Lumbra (14) challenges Otter Valley’s Hayden Bernhardt (24) for control of the ball during their Tuesday matchup at Markowski Field in Brandon on Tuesday afternoon.

Montpelier’s Quinn Mills (22) readies for a shot while playing Otter Valley at Markowski Field in Brandon on Tuesday afternoon.

BRANDON — The Montpelier boys lacrosse team can beat you with many different weapons.

Five guys had multi-goal games as the Solons grabbed their first win of the season, besting Otter Valley 16-9 Tuesday afternoon.

“That Montpelier offense is pretty legit,” said Otters coach Matt Clark. “We had trouble keeping up with them and their cutters.”

It was the first half that really pushed Montpelier to Tuesday’s win. The Solons outscored Otter Valley 10-3 before the break and controlled much of the possession.

“We put in a new offense and we wanted to create possession around that offense,” said Montpelier coach Nate Noble. “We wanted to let the ball do the work. It was all about ball movement and really getting the players in the right position that they need to be in.”

The first quarter was fairly even, with the Solons up two, but in the second quarter, a couple quick strikes put Montpelier in total control.

The Solons buried three goals within the span of a minute. Sina Fallahi scored with 11:05 in the half. Quinn Mills scored 49 seconds later and just eight seconds after that Bobby Cody added another goal.

Montpelier scored three of the next four goals heading into halftime.

“We had some first quarter, first time at home in two-year jitters,” Clark said. “We played with gator arms to start, dropping a lot of passes and not making the easy pass. We dug ourselves a hole early.”

Otter Valley looked much better in the second half and played the Solons pretty much even.

Clark pointed to his club getting back to basics being essential in that turnaround.

“As the game went on, we played lacrosse and the game got better. We got tighter and we played better,” Clark said. “Ultimately, we dug ourselves a hole that we couldn’t get out of.”

The Otters outscored the Solons by a goal in the third quarter, before Montpelier got the one-goal edge in the fourth.

David Williams was a driving offensive piece for Otter Valley in the second half, scoring three of his team-high five goals in that frame.

“That’s a senior captain last time playing. He wants to win them all,” Clark said. “He wants to do everything he can. That’s what you expect out of your senior captains. He delivered today, but unfortunately, we didn’t rise to his level.”

Outside of Williams, Hayden Bernhardt and Brady McDonough had two goals.

Quinn Mills was a big offensive force for Montpelier.

The Solons’ offense ran through Mills and he rewarded them with a game-high six goals. Mills set up a few of the other Montpelier goals as well.

“He’s a playmaker and when that happens, D-poles flock to him and it creates space for others. That’s exactly what happened today, so hopefully we can grow from this.”

Fallahi and Josh LaJeunesse both had three goals for the Solons and Cody and Will Bruzzese both had two tallies.