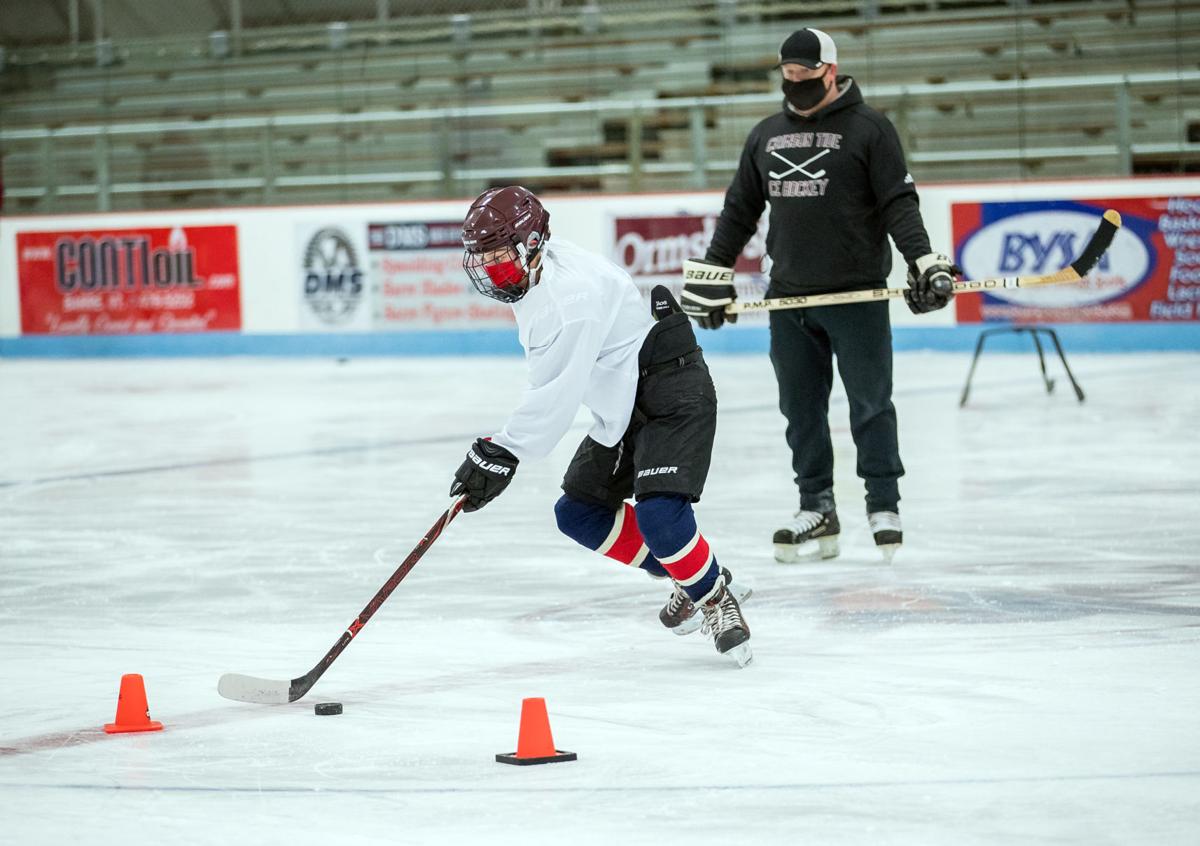 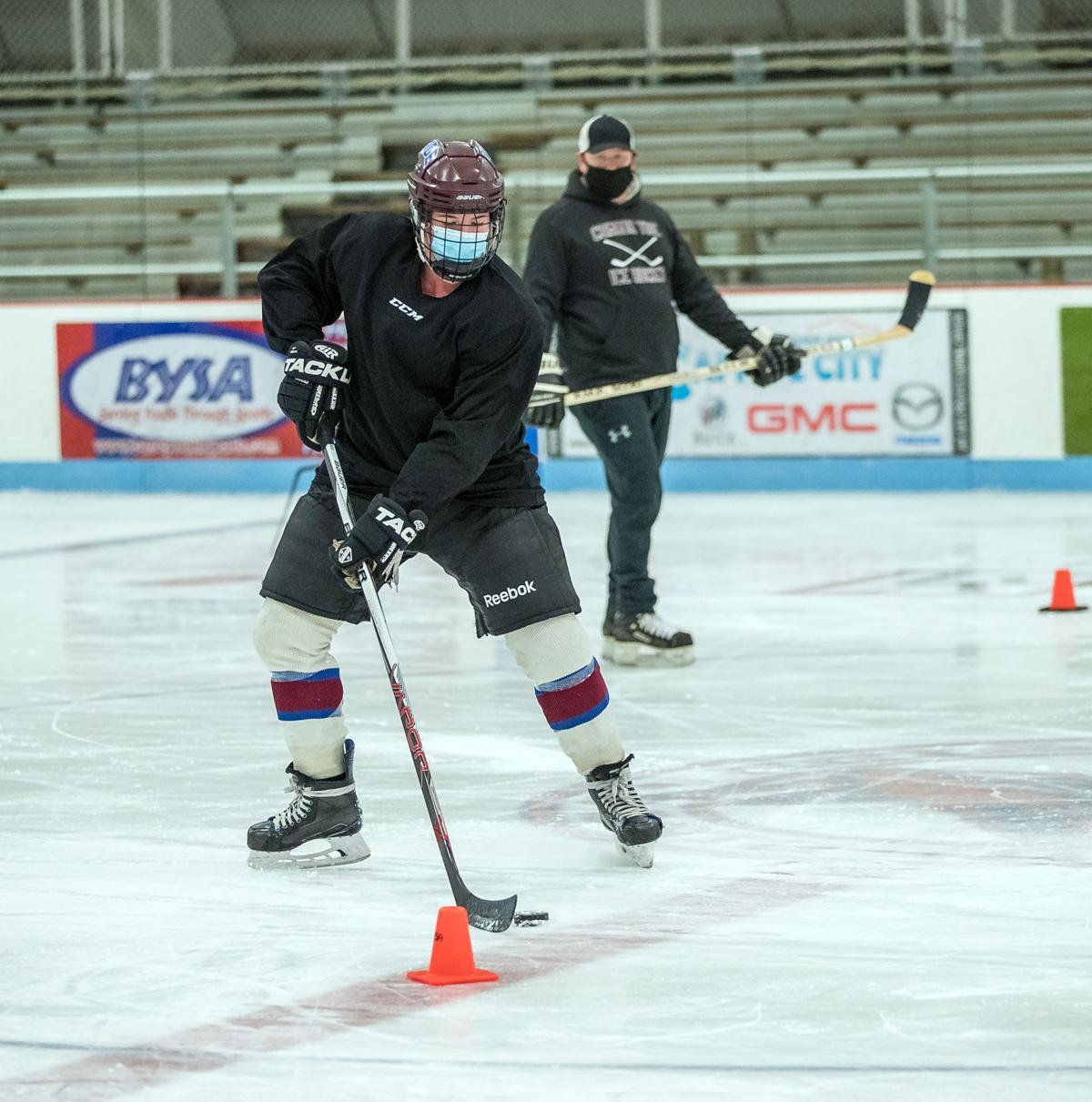 Spaulding girls hockey standout Rebecca McKelvey moves the puck past a cone Monday during a practice session in Barre.

Spaulding girls hockey standout Rebecca McKelvey moves the puck past a cone Monday during a practice session in Barre.

Dozens of Vermont high schools teams were raring to go Monday when they began their first days of no-contact skill building and strength and conditioning exercises.

Athletes in some areas got a head start on things after Gov. Phil Scott announced that physically distant training sessions could begin Dec. 26. Many teams went to work almost immediately, while others pushed their start dates back to last week, this week or next week. Schools are still waiting to get the go-ahead from state officials before full-contact practices or games take place.

Merriam is the athletic director at Essex, where practices were delayed due to a Covid-19 case. He was formerly the longtime AD at Spaulding, which announced last Friday that teams could start training a week earlier than the original Jan. 18 date.

Current Crimson Tide AD Natalie Soffen made the decision along with principal Brenda Waterhouse and superintendent David Wells after analyzing district and county Covid-19 data. Spaulding will attempt to begin the season Jan. 23 with a boys hockey game against Rice and a girls hockey contest with Burr & Burton.

Burr & Burton, Rutland and Brattleboro were three of the Division I institutions that held practices Dec. 28. Coaches at smaller schools like West Rutland, MSJ, Poultney, Proctor, Hazen, Twinfield and Danville were also on the basketball court that first week.

There is no plan for either a wrestling or indoor track and field season due to COVID precautions. Facial coverings are required for basketball, hockey, dance, bowling, gymnastics and cheerleading, with no fans allowed at indoor events. Ski and snowboard teams have also learned to follow new rules while hitting the trails in recent weeks. Many high school Nordic racers are registered to compete as individuals or for their club teams during Saturday’s Rodrigues Cup at the Craftsbury Outdoor Center.

Here are a handful of questions for Bob Johnson, the associate executive director of the Vermont Principals’ Association. The VPA oversees high school athletics and crowned state champions in six sports last fall. Football teams adjusted to a 7-on-7, no-tackle version of the game and played in regional tournaments.

TA: Is the timetable for winter sports technically still what it had been, and there just isn’t an update yet?

Johnson: “(Monday) would have technically been the first day to play games on the old timetable. But because we haven’t gotten the permission to go ahead, we’re probably looking now at another 10 days, minimum. And that’s assuming the governor gives us permission (Tuesday).”

TA: Is there a chance some of these teams could actually play a game without having had their contact practices yet?

Johnson: “No. What will happen is, once the governor makes the announcement, we will automatically go with the contact practice. For instance, he’s not going to come on (Tuesday) and say, ‘OK, you can play your games tomorrow night.’ He might say, ‘OK, I’m going to allow contact in practice or games to start as of Jan. 19.’ He’s not going to give it an immediate date. He’ll give a period of time to feed into it.”

TA: Have you found yourself in the position where you have to clarify some of these misconceptions about the season?

Johnson: “Oh yeah. I tell ADs in Friday notes and I give them an update. And if the update is there’s still no news, then that means we’re still on hold until the governor says so.”

TA: Are there some conflicting opinions on certain sports being allowed and others not being allowed? Or if there are some double standards with that stuff?

Johnson: “I don’t think there’s double standards. I think there’s questions around, ‘Why aren’t we allowing outdoor sports to go?’ Because there’s a real difference between being indoors and outdoors. And we don’t have an answer for that one. We’ve asked that question of the state and we’ve got no other guidance. So right now Alpine, Nordic and snowboarding are all under the same rules that the indoor ones are under.”

TA: Some schools like West Rutland, Danville and Hazen started right away. I know U-32 is still waiting until Jan. 18, so is that pretty typical to have a full three-week gap between some of these schools?

Johnson: “Yeah, it is. And that was purely a local school decision. They could have started on Dec. 26 if they wanted to. They chose to wait until after the Christmas break was through.”

TA: What’s the involvement been with some of these sport-specific committees — the basketball or the hockey or the ski committees — in the last few weeks?

Johnson: “There has not been any involvement in the last few weeks. They met back in November when we were getting ready for the winter season. And basically we outlined what the season would potentially look like. We have dates set up for tournament games and things of that nature right now. So the decisions about the season have been made. It’s just a matter of, ‘When can we start?’”

TA: Have you heard many early reports about how the no-contact practices have been going?

Johnson: “The only thing I’m hearing is very informally, and people who are doing it are not having any issues with it. What a lot of people forget is that there really have not been any reported incidents yet of people contracting COVID because of involvement in sports games. We haven’t had that. It’s been all related to things that have gone on after the game when people were having social gatherings or whatever.”

TA: There was a lot of chatter about New Hampshire practicing before Vermont. Is the VPA monitoring what other states are doing, either on a regional or national level?

Johnson: “Every Monday I meet with the section directors for Section 1, which is Maine, New Hampshire, Vermont, Massachusetts, Rhode Island, Connecticut, New Jersey and New York. We talk and it’s all over the place in terms of who can do what, where and when. We periodically talk nationwide and it’s the same thing: It’s all over the place.”