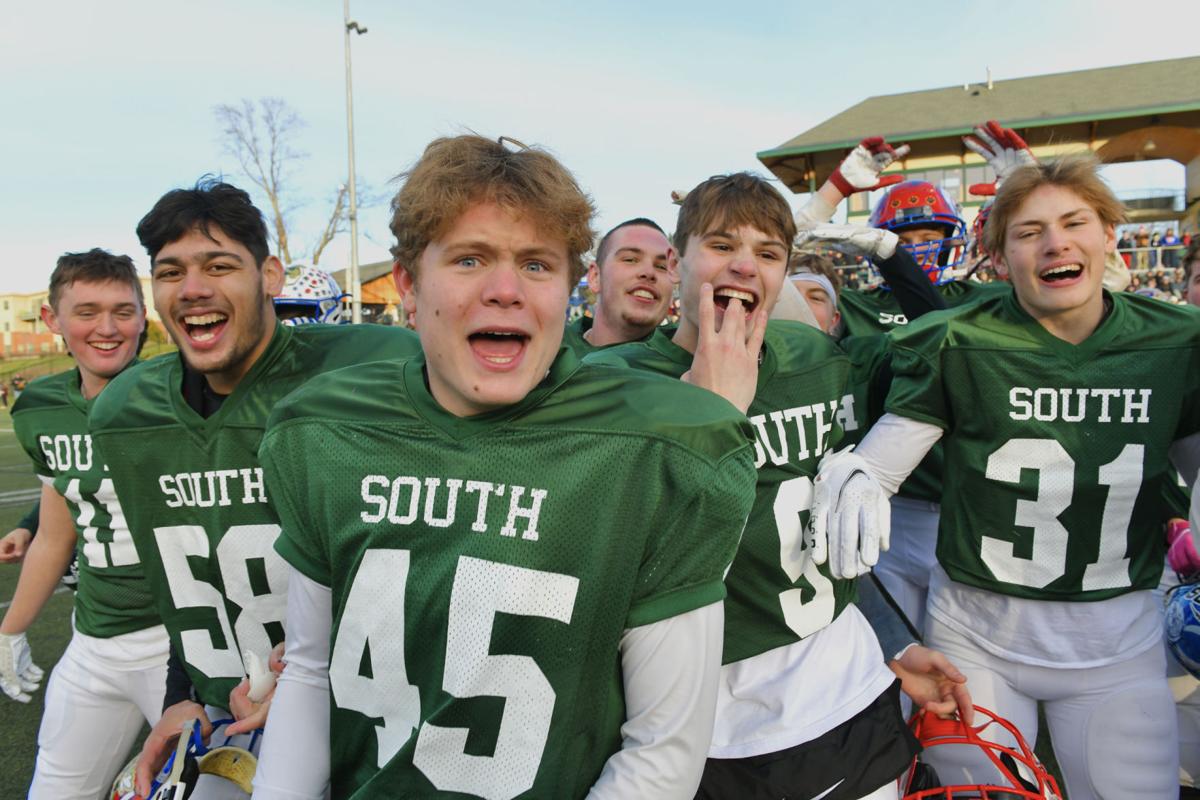 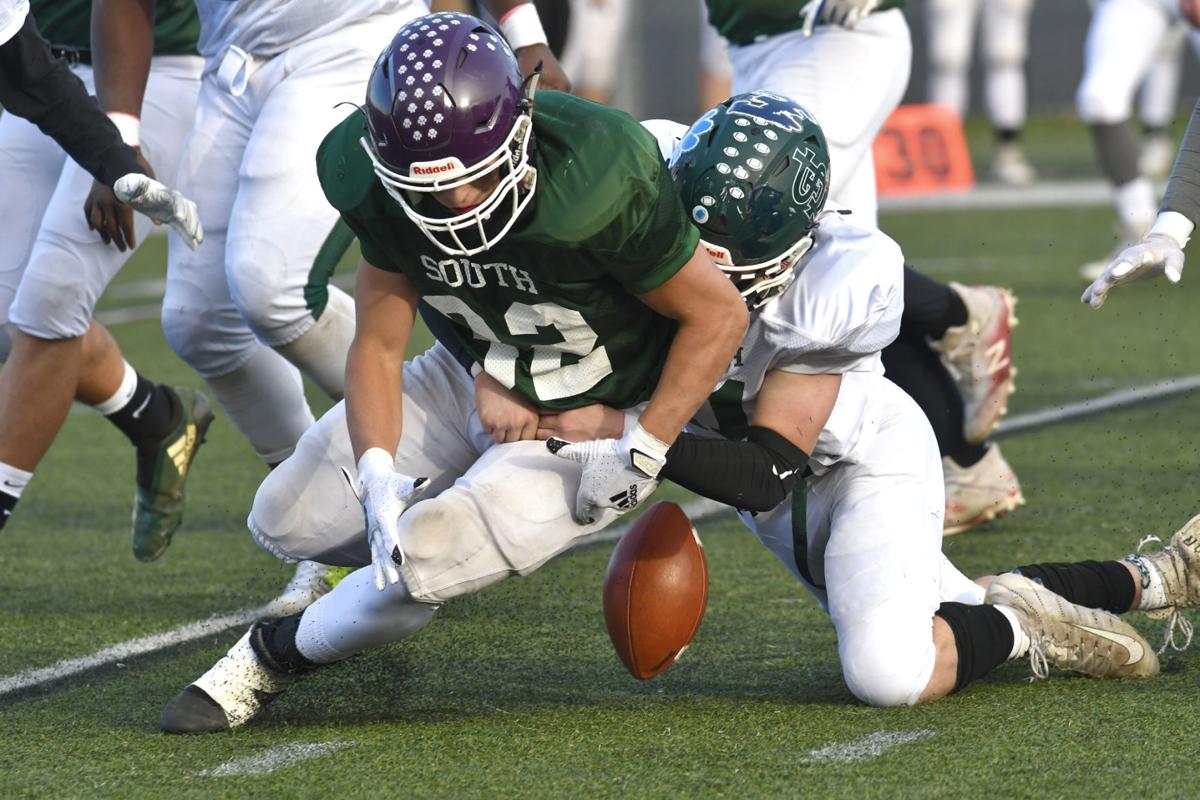 South running back Jeb Lober (32) of Bellows Falls fumbles the ball, prior to a South recover in the 2021 Vermont North-South All Star Football Game held at Dave Wolk Stadium on the Castleton University campus. 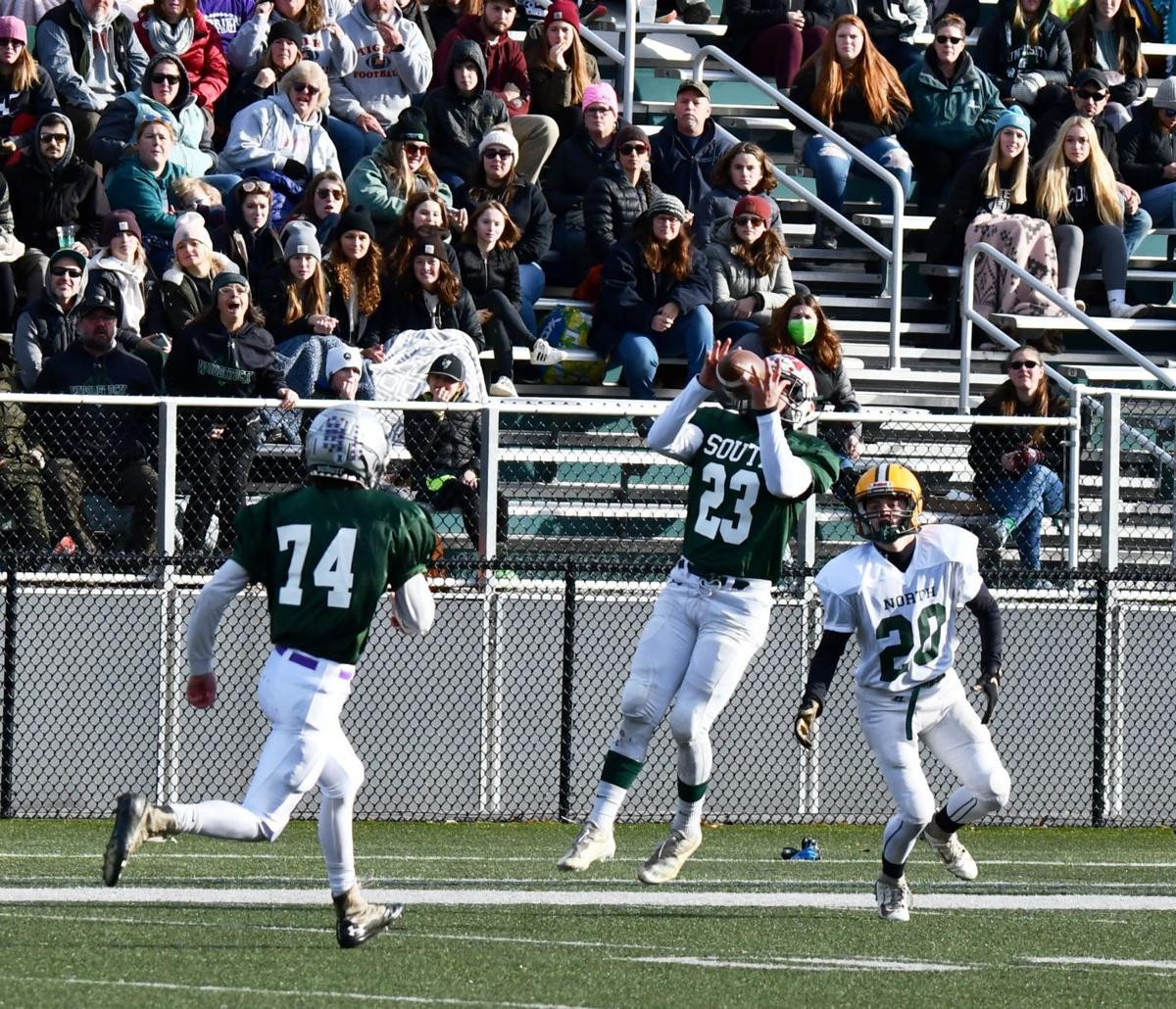 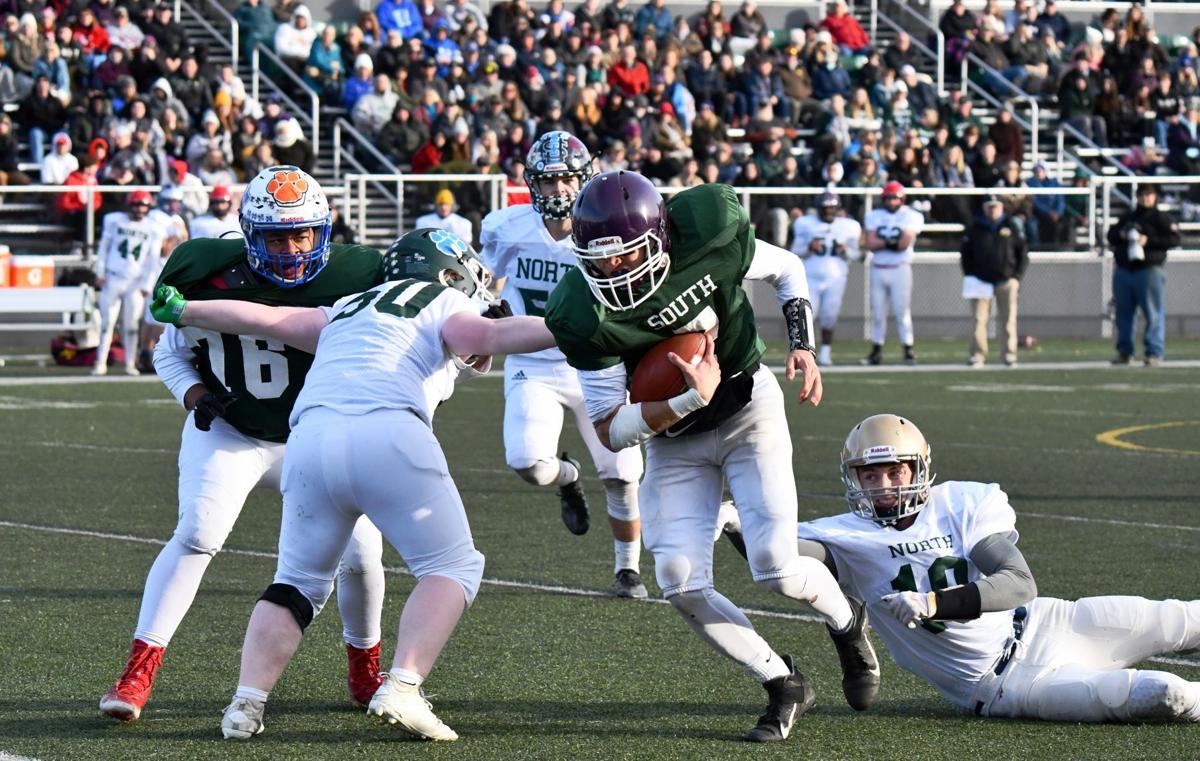 South running back Jeb Lober (32) of Bellows Falls fumbles the ball, prior to a South recover in the 2021 Vermont North-South All Star Football Game held at Dave Wolk Stadium on the Castleton University campus.

CASTLETON — It was game where 74 points were scored, yet there were defensive players standing out in the South’s 39-35 victory on Saturday in the North-South All-Star Football Game on the Castleton University campus.

Rutland’s Jack Coughlin helped key the South’s defensive unit with his penchant for swarming to the ball from his middle linebacker spot.

“Defense is my thing. I love contact. I am all about getting to the ball,” Coughin said after a day of racking up the tackles.

“I played outside linebacker at Rutland. Here, they switched me to middle linebacker but it’s doing the same things.”

Then, there were Woodstock teammates Robby Macri and Corey White making a couple of the biggest defensive plays of the day for the South.

White might have made the biggest stop of the game when he tackled a North ball carrier on a fourth-and-four situation deep in South territory in the fourth quarter.

Later in the game, Macri’s interception snuffed out another North scoring threat.

“It was late in the game and I knew we had to have the stop. I was pretty sure that the play was coming to my side. They had just run a play to the other side,” White said.

“I just got off the guy blocking me and made the tackle.

White also had the coverage on Macri’s interception.

“Jack Coughlin did a good job of calling out the play out (in the defensive huddle),” Macri said.

“Ricky Young from Windsor was great on the defensive line. He was always in their backfield,” Hill said.

Hill also cited his Windsor teammate Austin Gauld as another key ingredient of the defensive unit as well as Otter Valley’s Brady Diaz from his defensive end spot.

“I thought we put the players in the right positions, some of them in spots that they did not play during the season, and they made the plays,” Hill said.

There was also an interception by Hartford’s Tarin Prior to ice the game.

A South team’s defense hung a goose egg on the board in 2002, a 21-0 victory in the second game of the series.

But even in a game filled with points, the South defense stood tall.

“I was pretty pleased,” Woodstock coach Ramsey Worrell said after watching Macri and White in the game at Dave Wolk Stadium.

“At first I was a little bummed when I heard they weren’t going to be playing at all on offense because I think they are very talented offensive players.

“But it looks like it was a good decision.

“Corey’s tackle on fourth down came at a very important time. He got off his block and kept his leverage.

“They both made big plays that helped seal the game.”

Happy endingsThe South’s victory was just a continuation of a glorious 2021 football season for Bellows Falls Union High School’s Patrick Barbour, Harrison Gleim, Jed Lober, Jeb Monier and Jon Terry. They won a state title and capped an unbeaten season on Nov. 13 and walked off the field winners again with the victory over the North.

But the North-South event is also about having that feeling of walking off the field a winner for guys who rarely got to experience it during the season.

Colby Hutchins and his Poultney High teammates endured a 1-8 season that ended with a 38-6 loss to Windsor in the Division III playoffs.

But Hutchins got to contribute in the trenches for the South in its victory. He had a hard time supressing a smile after the game.

It was a reward for a lot of hard work without much success until Saturday.

Even guys on the North who played on teams that weathered a rough season, left the field happier than they did most of the times throughout the fall.

Mount Abraham quarterback Adam Mansfield wasn’t on a lot of football fans’ radar after he and his Mount Abe teammates went through a 1-6 season.

Brent Curtis pointed out on his broadcast of the game that Bristol’s Mount Abe does not always get a lot of exposure due to its location. The Eagles get less during a 1-6 season.

But it was impossible for Mansfield not to be on your radar if you were at Dave Wolk Stadium on Saturday. He ran for a touchdown, threw for a couple more and was a standout on special tams.

The North-South showcases a lot of the top players on the Vermont high school football landscape — unbeaten state champions and those playing on teams struggling mightily through their seasons.