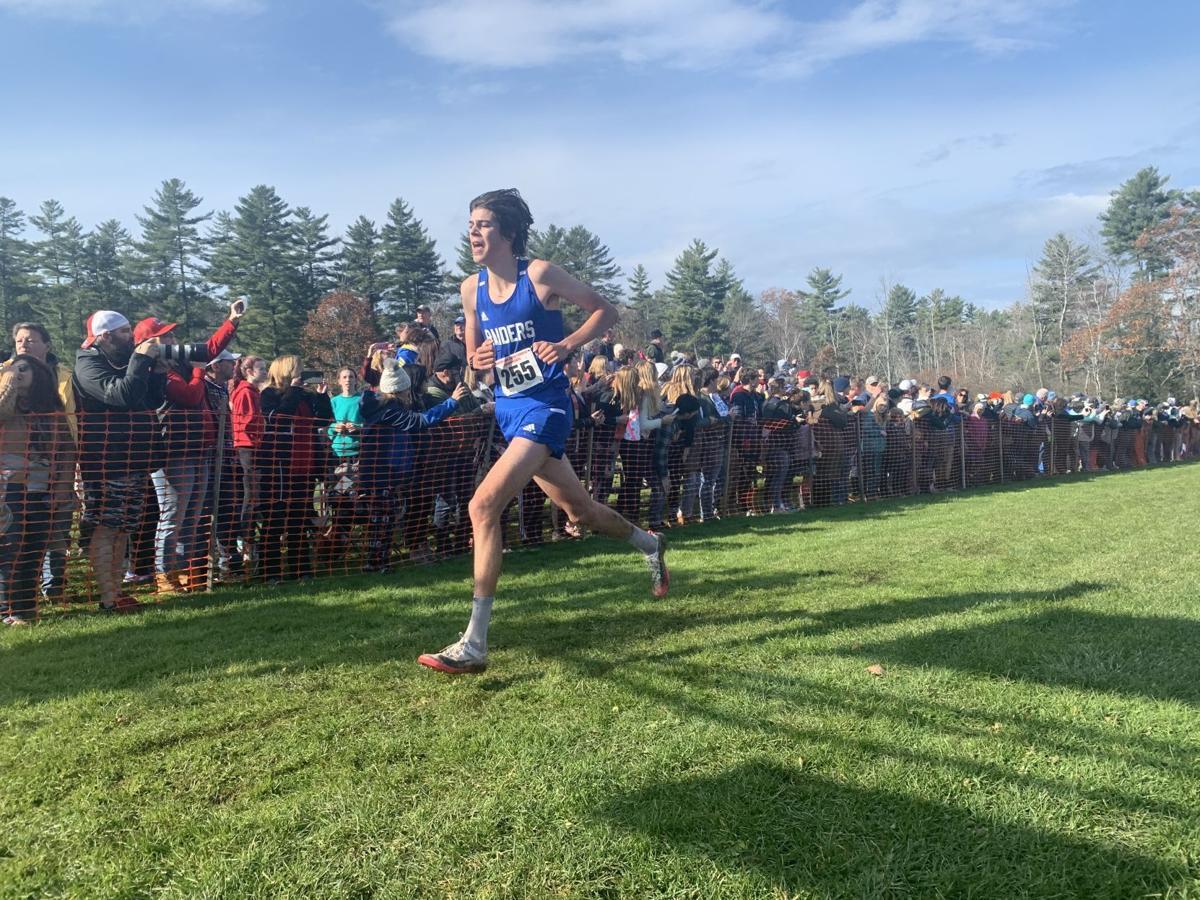 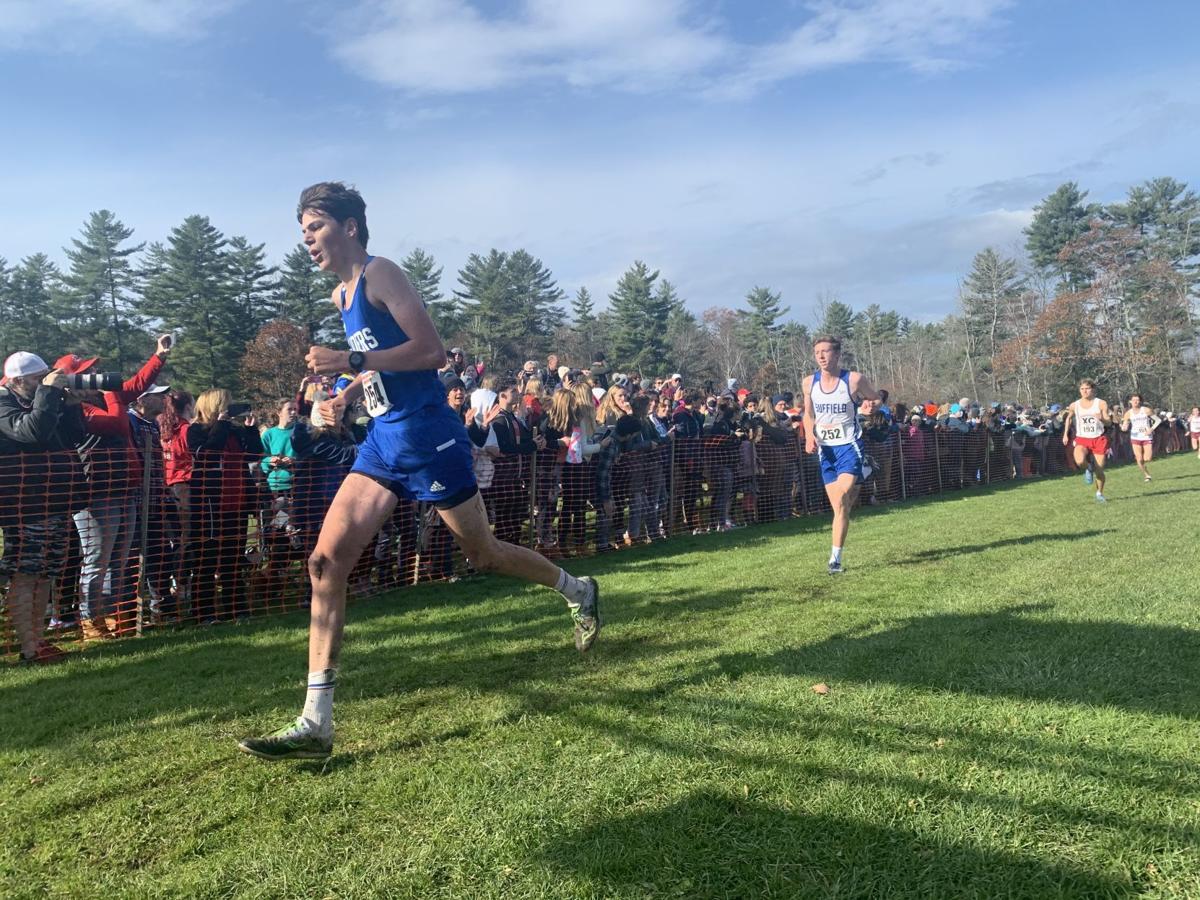 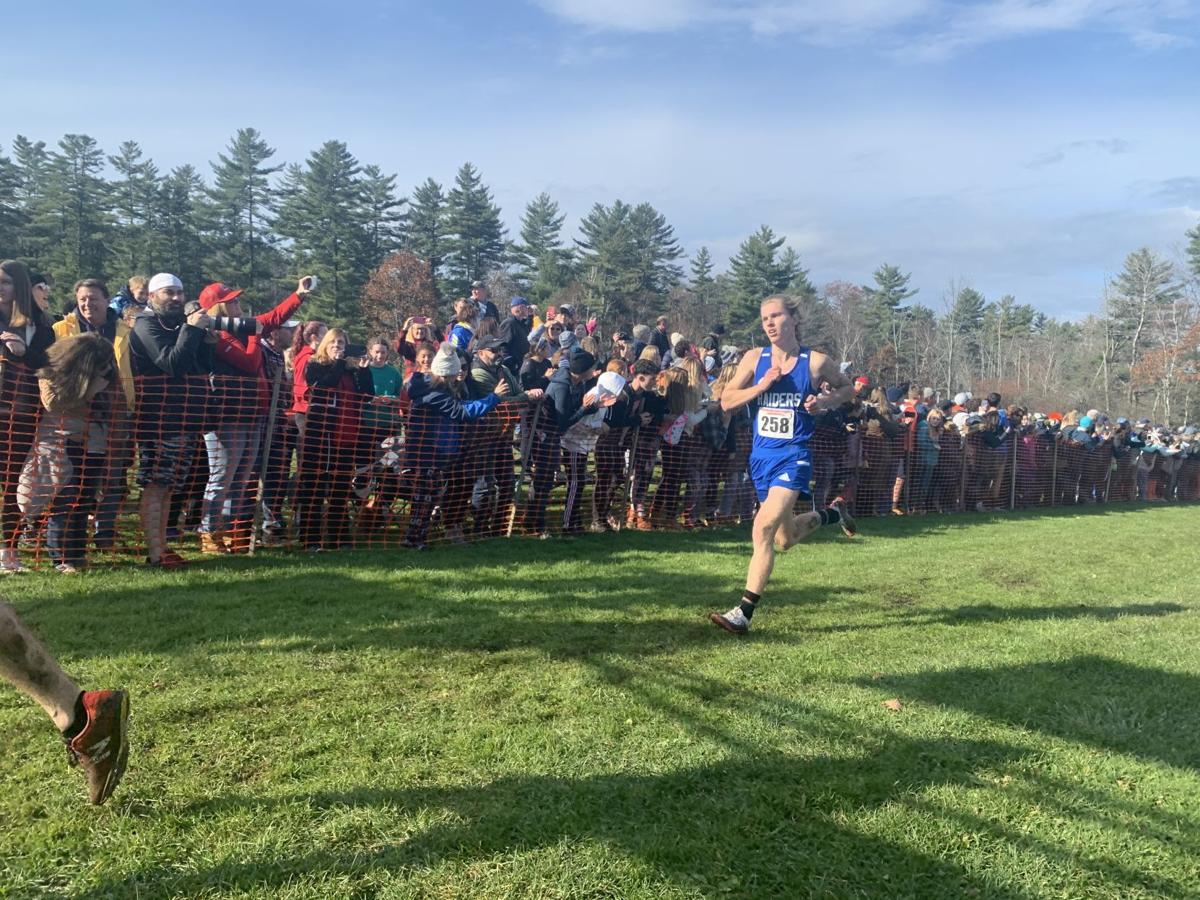 U-32 runner Oliver Hansen makes his way toward the finish line during Saturday’s New England Championships at Thetford Academy. 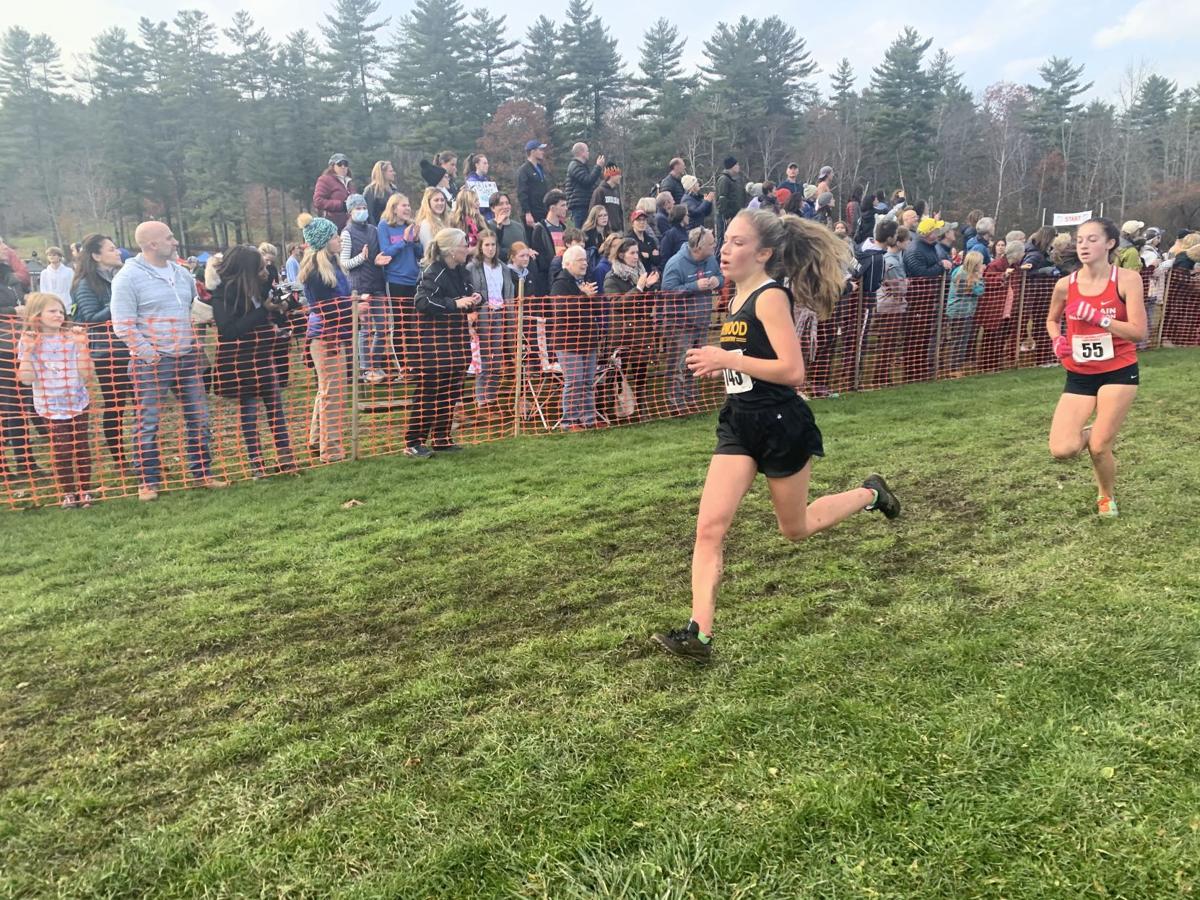 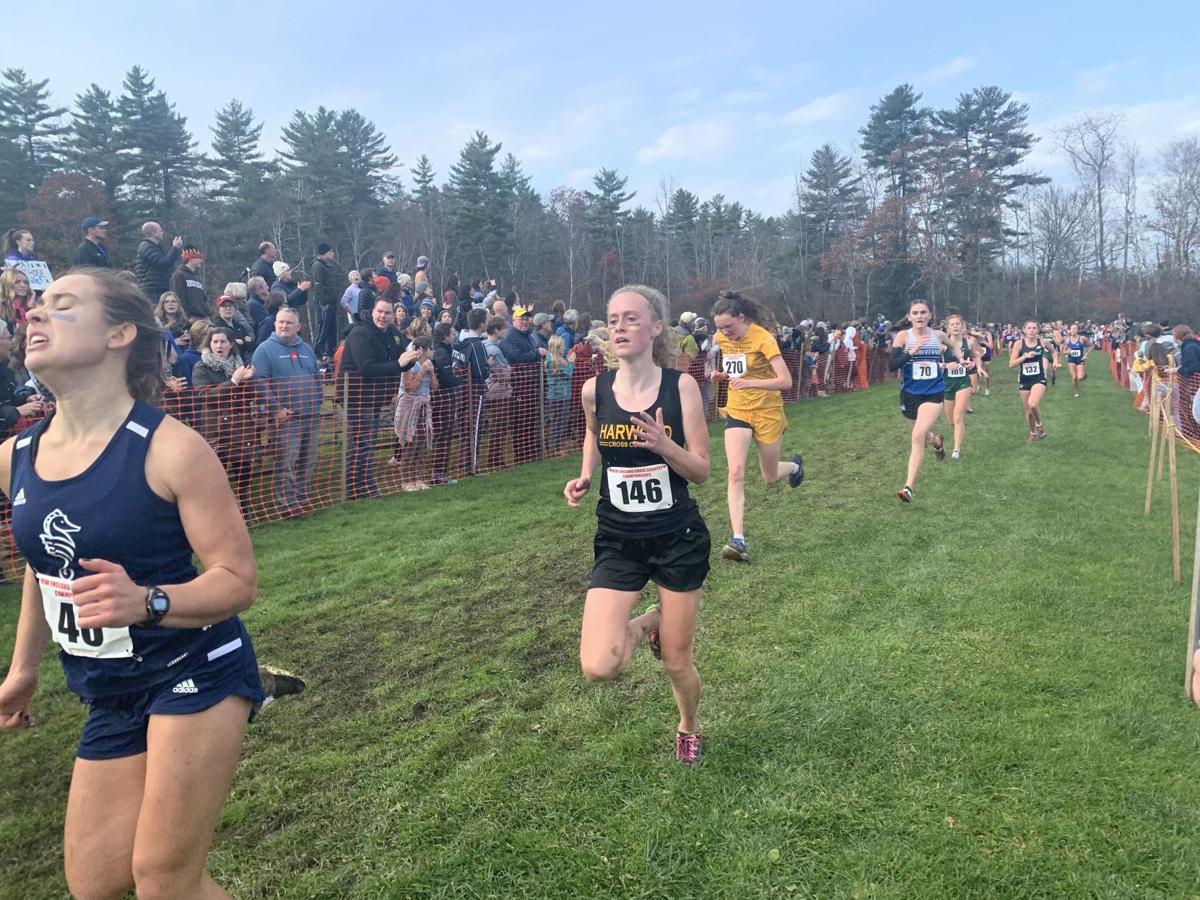 U-32 runner Oliver Hansen makes his way toward the finish line during Saturday’s New England Championships at Thetford Academy.

Two sets of siblings powered U-32 to a 23-point victory over Rhode Island powerhouse La Salle Academy, marking the first time a D-II school from Vermont prevailed over its regional rivals. The 1987 Essex squad was the only other Vermont team to win New England’s, but the Raiders were confident entering the race after excelling against elite out-of-state competition all season.

“We knew we had a good shot at it coming into the race,” U-32 senior Oliver Hansen said. “And if we ran a good race and attacked the course in the right spots, that we could do it. But it’s still crazy to think about.”

“The way the start worked, we just got choked,” Oliver Hansen said. “Everyone came from all the sides, and so I was able to sneak through and go around. So I had a much better route than (the Beards) did. But they caught up with me at the mile. And then I was able to hang with them a little, but they took off.”

It was a David vs. Goliath battle entering the 86th running of the event. Bishop Hendricken and La Salle are private academies that recruit the top runners from Rhode Island, while U-32 is a public school that’s not big enough to compete in Vermont’s large-school division. But Tripp’s team was far from an underdog after edging Bishop Hendricken by one point to crack the podium last month during the Eastern States Championships race at the Manhattan Invitational.

A field of 263 competitors led to a major bottleneck 400 yards after the start. Athletes attempted to avoid any major crashes or meltdowns during the early going, but almost everyone was caked in mud by the 1-mile mark.

Athletes jockeyed for position in an open field after the gun went off and then things got tight in a hurry. One miscalculation or misstep would be costly for any athlete, so Oliver Hansen and the Beard twins wasted no time racing to the front of the stampede.

The Raiders were all careful to stay on their feet, conserve energy and avoid any crash-and-burn scenarios. U-32’s top thee runners were in solid position at the 1-mile mark, but they still had their work cut out for them as La Salle, Ridgefield and Bishop Hendricken were all hot at the start.

Silvestri and Austin Beard wound up in a dogfight from start to finish.

Oliver Hansen instinctively tucked in directly behind Carson Beard and the pair went to work while passing competitors one at a time. The runners did most of their damage during the second half of the race, taking advantage of the uphills, downhills and everything in between.

Austin Beard and Silvestri were running neck-and-neck entering the final turn into the homestretch when Beard tumbled to the ground while attempting to overtake the Hawks runner. The Raiders standout estimated it cost him four spots in the final rankings.

Even though Silvestri finished a few spots ahead of the Beard twins, Hansen’s 28th-place result gave the Raiders a huge advantage. Bishop Hendricken beat La Salle at last week’s Rhode Island state championship, but suddenly it was the Rams challenging U-32 for the team title. And upset-minded Ridgefield also made a bold move while seeking its first New England crown.

When all of the Raiders finally crossed the finish line, reactions from the team were equal parts fist bumps and head scratching. A sizable crew of individual runners — who don’t count in the team scoring — made it difficult for anyone to declare an immediate winner. U-32’s runners waited 25 minutes before the start of the girls race and then cheered on the Raiders’ girls squad. A few minutes after the girls finish, good news arrived.

Cyrus Hansen and Burns tipped the scales for U-32, although they didn’t realize it immediately. Hansen’s 72nd-place finish and Burns’ ability to crack the top-100 may not have featured the same “Wow” factor as a typical title-clinching moment. But when the final scores were added up, the Raiders’ No. 4 and 5 runners turned out to be the difference-makers.

Burns and Cyrus Hansen were fully aware that they might not beat every counterpart from La Salle, Ridgefield and Hendricken. But limiting the damage was always on their minds.

Former U-32 coach Mark Chaplin made the trek down to Thetford to cheer on his former racers. Last year his cross-country running, Nordic skiing and track and field teams earned a boys-and-girls sweep of every D-II state championship. The longtime science teacher stood next to his wife during the celebration ceremony and witnessed a new first for their community. And it was 20 years after their oldest daughter, Tara, won the NCAA Division I cross-country championship.

“He retired and he had 50 state champs,” Oliver Hansen said. “And then the year after he gets the New England’s (title). It’s pretty crazy just how amazing of a coach he is and everything that he’s been able to do.”

THETFORD — A three-month cross-country running season reached its end Saturday and the Harwood girls saved their best for last.

Senior Ava Thurston cracked the podium and the Highlanders recorded the top finish ever by a Division II girls squad during the New England Championships. Coach John Kerrigan’s team surpassed the previous high-water mark set by U-32, which placed sixth in 1999.

Two weeks ago HU captured its 11th D-II title in 13 years and nearly defeated D-I winner Burlington in the process. Last week the Highlanders earned two-point victory over CVU at the Vermont Meet of Champions.

“Usually New England’s is an added bonus,” Thurston said. “We wanted to win states. We wanted to be the top team in the state and Burlington had it by two points.

“It’s always pretty hard — these extra two weeks are mentally tough. And luckily Meet of Champs — it was nice this year to carry our momentum. …But this is the first year in all my four years that New England’s been like, ‘Hey, we can do really well as a team.’ And not just, ‘Let’s see how we can do.’”

“This has been the best team I’ve ever been on in my four years at Harwood,” Ava Thurston said. “We’ve had some really awesome teams, but I think this year the group has really clicked.”

Connecticut’s New Milford placed first as a team with a score of 140 points and Maine’s Bonny Eagle placed second with 208 points.

Ava Thurston charged toward the front of the pack during the first 400 yards while sprinting on a muddy, chewed-up athletic field. She avoided any contact with other runners and maintained her lead as racers scrambled to establish some breathing room while heading into the woods.

It was only a matter of time before White overtook the leaders and opened up a sizable gap over the rest of the field. Thurston resisted the urge to take off with the Orono standout and opted to save energy for the steep climb up “Morty’s Monster” near the 3-kilometer mark.

The Highlanders’ veteran had lots of company nearing the start of the big hill while battling for third place, but she was all by herself at the top with only White and St. Germain in front of her. Thurston’s climbing ability was unmatched by anyone else in the chase pack and she was quick to credit her Nordic skiing background and strength-training. Last winter she represented the U.S. during junior world championships for skiing.

“I think it really helps for the hills,” she said. “I do all sorts of training and my arms are really strong. I could feel my arms getting tired today. But this is a ski course and I think all the ski training that I do makes me really versatile for being on the hills.”

Thurston was relatively unchallenged during the homestretch and finished 12 seconds ahead of the fourth-place finisher. Zetterstrom, Clerici, Flint and Julia Thurston all made their way across the line during the next few minutes to give coach Kerrigan his best team result at New England’s.

Ava Thurston will undoubtedly leave a big void along with fellow captains Zetterstrom and McDonough. But they’re not worried about next year’s team picking up the pieces and bringing more hardware back to the school’s trophy case.