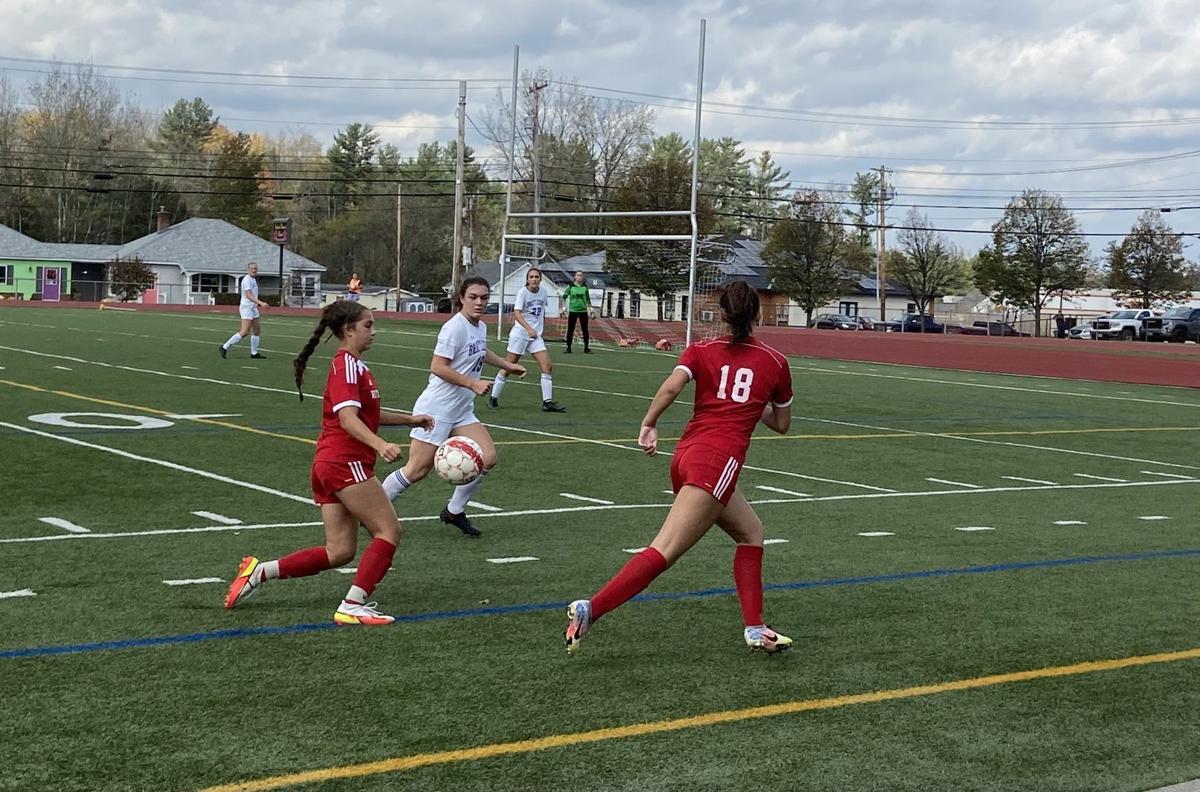 Rutland’s Bethany Solari looks to gain possession of the ball while teammate Molly Abatiell runs along the sidelines during Saturday’s game against Brattleboro at Alumni Field. 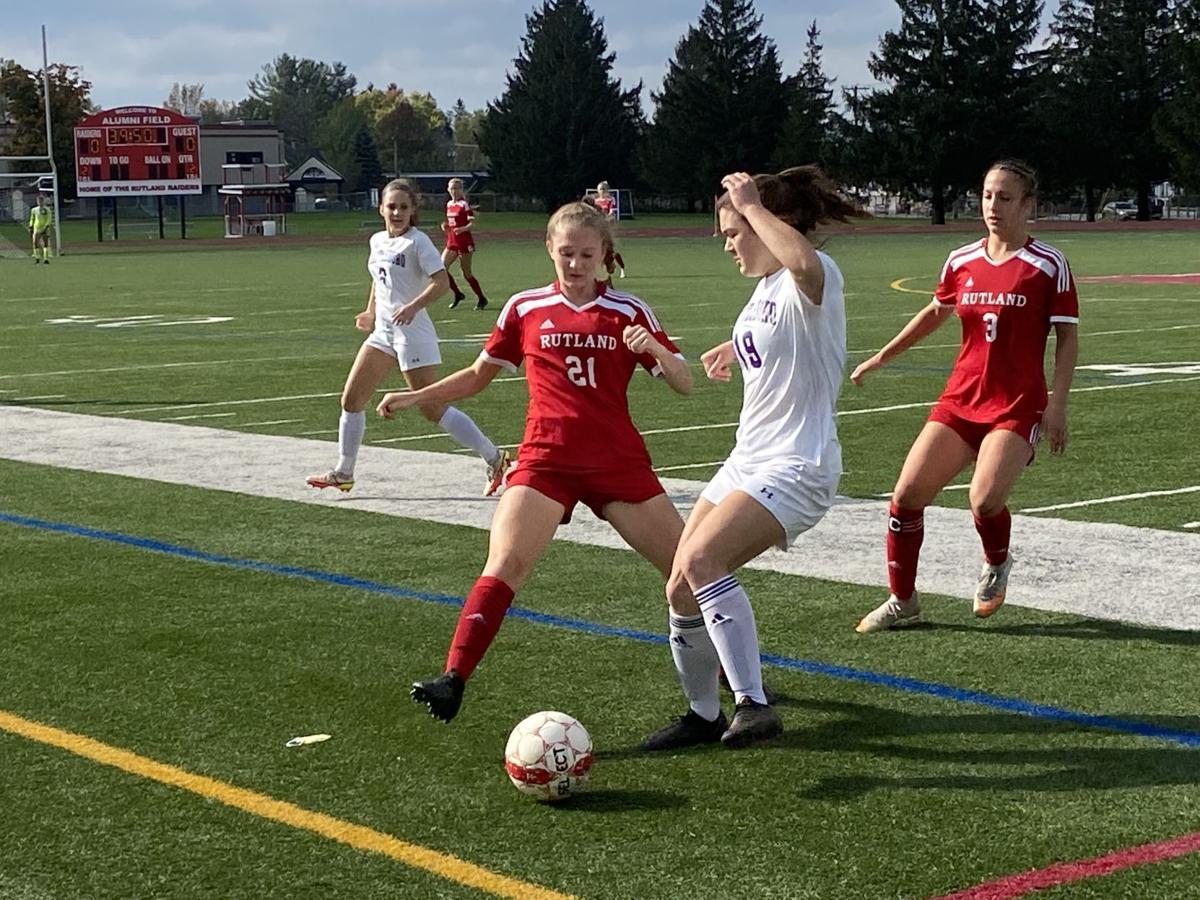 Rutland’s Elise Lidstone (21) and Brattleboro’s Sophia Renaud (19) battle for possession along the sidelines during Saturday’s game at Alumni Field.

Rutland’s Bethany Solari looks to gain possession of the ball while teammate Molly Abatiell runs along the sidelines during Saturday’s game against Brattleboro at Alumni Field.

Rutland’s Elise Lidstone (21) and Brattleboro’s Sophia Renaud (19) battle for possession along the sidelines during Saturday’s game at Alumni Field.

Winning has become the Rutland girls soccer team’s middle name over the last month. The Ravens picked up their ninth win in a row, beating rival Brattleboro 6-0 Saturday afternoon at Alumni Field.

Bethany Solari led an effort that saw five Rutland players score on Senior Day. Solari opened the scoring after a great run down the left side of the field, coming off a Karsyn Bellomo assist with 28:51 in the first half

Solari scored again three minutes later, cleaning up a rebound off a Camryn Kinsman shot. Kinsman was awarded the assist.

Ady Kinsman got in on the action next with a beautiful hooking corner kick that found the back of the net and Izzy Crossman added the final goal of the first half on a great cross by Allison Rice.

Rutland added a pair of insurance goals in the second half. Solari was brought down in the box and Ravens keeper Kathryn Moore came on to finish off a penalty kick. Camryn Kinsman added the final score on a direct kick.

Rutland (10-3) wraps up the regular season on Wednesday at Mount Anthony.

Competing against 26 other teams, Rutland snared the brass ring with Brady Geisler leading the way. Geisler clocked 15:49 to finish third.

The Rutland team left in such a hurry due to heavy rain that came immediately after the finish that coach Tom Geisler did not realize his Rutland team had won until they were halfway home.

Rutland only had four girls so they did not have a complete team for scoring purposes but they had some impressive individual performances.

The next big item for the Ravens is trying to defend their Southern Vermont League Large-School championship Tuesday on the Bellows Falls Union High School cross-country layout.

The Slaters notched their second win in a row, beating Brattleboro 2-1 in overtime on Saturday.

Paityn DeLong had the game-winner early in overtime, scoring on a breakaway 1-on-1 with the goalie.

The game was scoreless at the half and the Colonels scored first in the third, coming from Emma Gragen midway through the quarter.

Fair Haven drew even with 2:26 left in regulation on a goal from Emilee Higgins.

“The girls played with their full heart and left everything on the field,” said Slaters coach Allison Resnick.

Brittney Jackson led the Otters with three goals. Taylor Lampman and Ryleigh LaPorte both had two goals and LaPorte had an assist.

OV got single goals from Sydney Gallo, Elizabeth Atherton, Mackenzie McKay and Riley Keith. Keith had a trio of assists, while McKay and Atherton both had one helper.

Adam Shum had a big day for the Minutemen, with two receiving touchdowns from quarterback Anthony Cavalieri, a rushing score and a fumble recovery for a touchdown.

Ross Badgley also rushed for a score and Connor Lopiccolo had a 2-point conversion.

“It was a pretty tight first half and then they had some key guys go down,” said MRU coach Greg Lewis. “Our guys started stepping up at the same time. It was our best game of the season by far.”

Mill River (2-5) is at Poultney to end the regular season on Saturday.

CHESTER — The Green Mountain boys soccer team got back to its winning ways, following a tie earlier in the week, besting Leland & Gray 4-0 on Saturday.

The win lifts the Spartans’ record to 4-10 and and 2-4 in the Little East Conference.

Castleton is at UMass Dartmouth on Saturday for another LEC game.

PLYMOUTH, N.H. — The Castleton University and Plymouth State women’s soccer teams battled to a 0-0 tie on Saturday in a Little East Conference game.

Castleton travels to SUNY-Potsdam for a non-league game on Tuesday.

CASTLETON — The magical season continued for Emily Harris of Crondall, England on Saturday. She scored her 19th, 20th and 21st goals of the season to power the Castleton University field hockey team to a 4-3 victory over Fitchburg State.

Tessa Rubocki had the Spartans’ other goal and Payton Barlow contributed two assists.