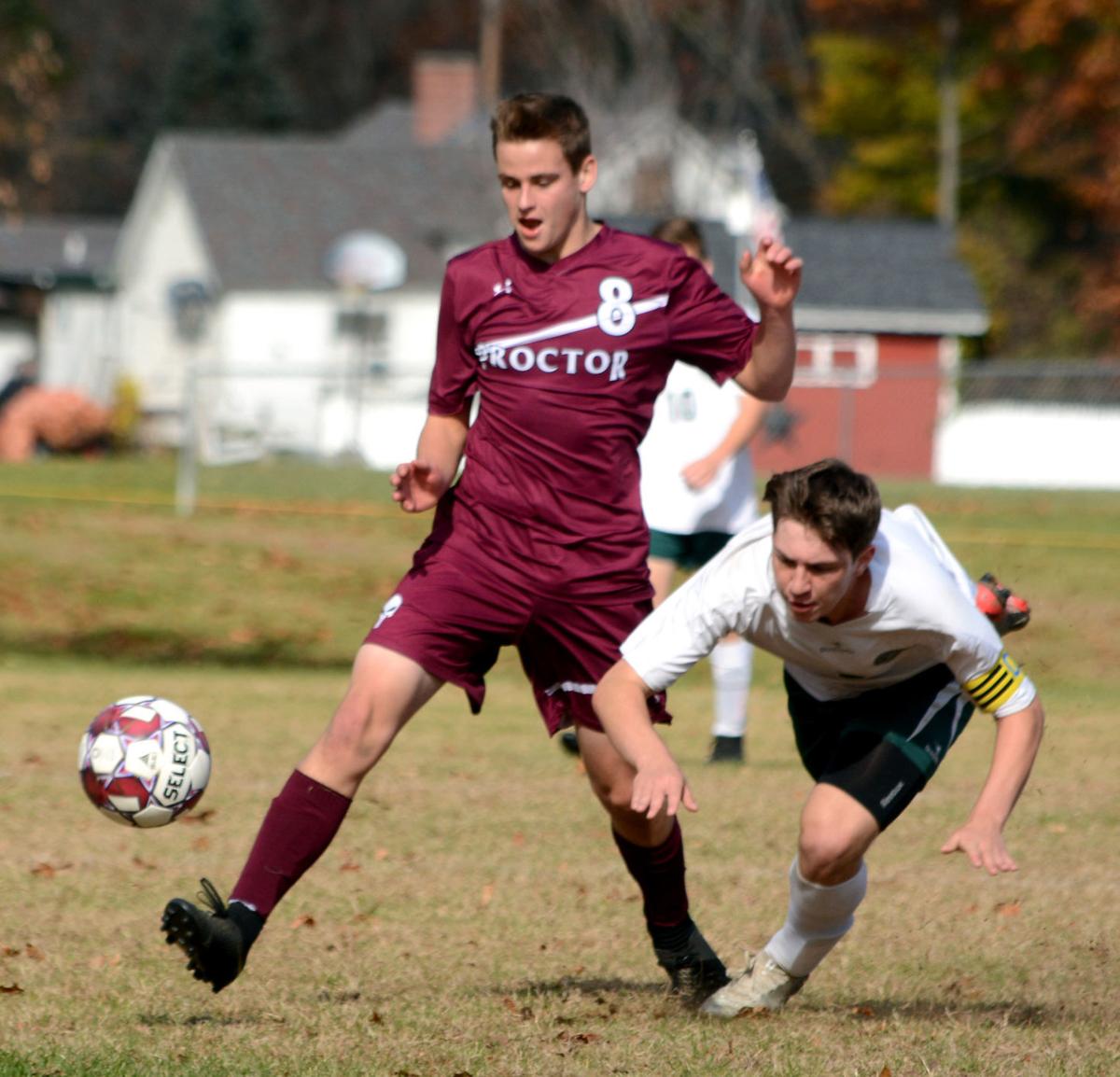 Proctor’s Jed Nop, left, advances the ball despite efforts by a West Rutland player during Saturday’s game on Taranovich Field in Pittsford. 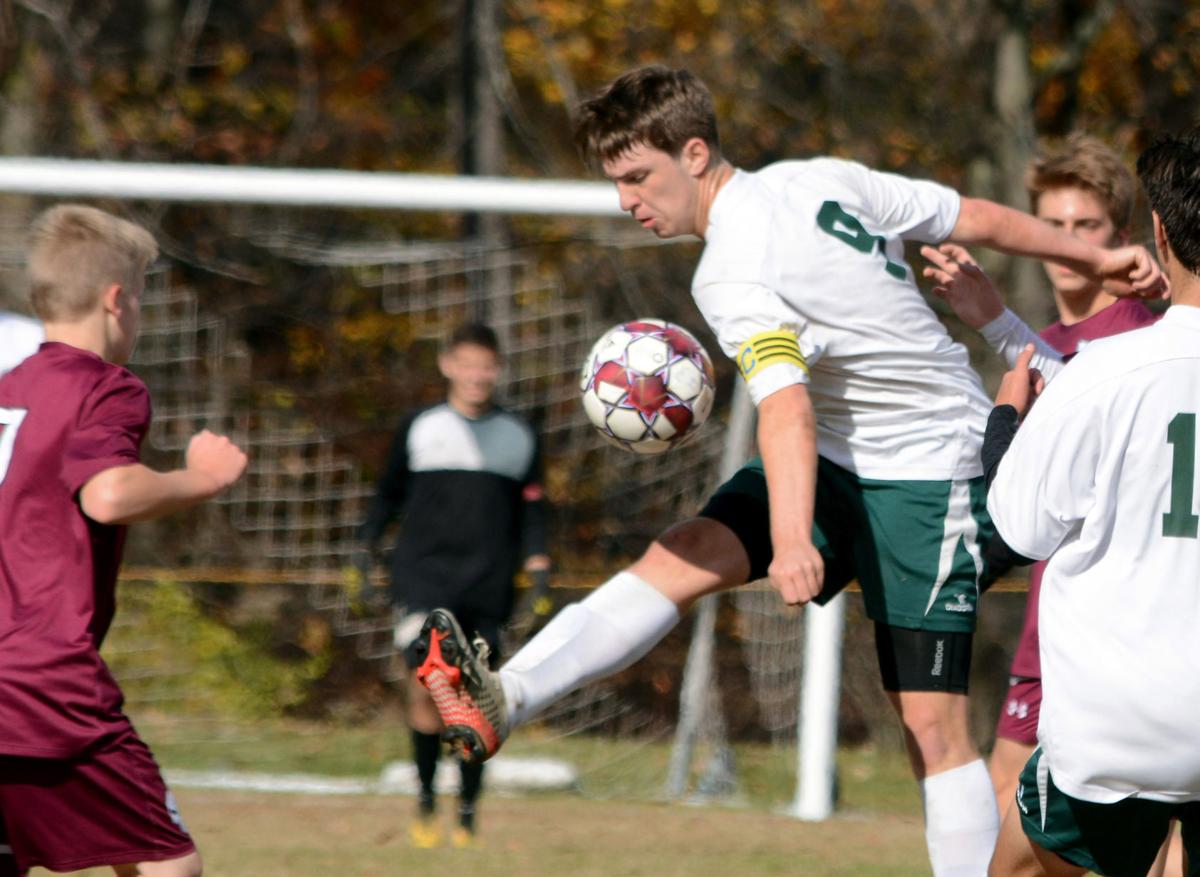 Proctor’s Jed Nop, left, advances the ball despite efforts by a West Rutland player during Saturday’s game on Taranovich Field in Pittsford.

PITTSFORD — Proctor finally scored a goal against West Rutland goalie Kyle Laughlin after 236 minutes and 10 seconds of soccer this season. But it wasn't enough. Tyler Serrani and Tim Blanchard saw to that, lifting the Golden Horde to a 2-1 overtime victory Saturday over Proctor in a Division IV boys soccer quarterfinal game at Taranovich Field.

The ball was bouncing around in the box and Serrani settled it with his chest and got it to Blanchard, who ripped a hard shot past Proctor keeper Ian French for the golden goal in the second 15-minute overtime stanza. The game was only 3:22 away from being resolved by penalty kicks.

West Rutland took a 1-0 lead to halftime on a 22-yard direct kick by Serrani, a well struck, low line drive past the diving French.

Proctor was undisciplined in the first half, but the Phantoms responded in the second half. They played smarter soccer, turned up the intensity and dominated the second half as well as the overtime minutes.

But the domination was muffled by highlight-reel saves from Laughlin.

"Kyle Laughlin is an amazing goalie. I haven't seen a goalie play at that level since I was helping Kevin Ratti coach Proctor and his son Justin was in goal," Proctor coach Chad Wilson said.

Laughlin had to be outstanding because the Phantoms' pressure throughout the second half and the overtimes was relentless.

"I really think in the second half, being down a goal, they knew they had to play with a chip on their shoulder," Serrani said.

That pressure paid off 6:10 into the second half. Solomon Parker headed Joe Valerio's corner kick past Laughlin to square the score.

The Phantoms came out strong and thoroughly dominated the game's first 10 minutes. Cam Richardson had a threatening cross. Conner McKearin and Jed Nop got off shots on goal. Joel Denton nearly earned a score for the Phantoms by crashing the net.

But then the Phantoms lost their discipline. They committed some fouls that Wilson felt were of the unnecessary variety and West Rutland asserted itself.

One of those fouls that provoked Wilson's ire gave Serrani his direct kick and he capitalized on it.

Wilson repeatedly stressed to his players that they were not going to beat Laughlin with shots from the perimeter or by taking aim inside the near post.

Parker's header near the goal line was precisely the type of shot that it takes to solve the Horde keeper.

The Phantoms kept up the attack after they knotted the score. They played the majority of the rest of the game on their offensive third of the field. Parker nearly converted some more headers as Valerio's corner kicks gave him more chances. Denton, McKearin and Brennon Crossmon all unloaded strong shots.

"They kept pounding the shots, but that's what we do every day in practice — they take a lot of shots against me," Laughlin said.

Proctor had many more shots but West Rutland did threaten a few times with Blanchard, Mac Perry and Serrani doing most of the sniping. French was able to handle the shots.

"It wasn't pretty but it doesn't have to be," West Rutland coach Dillon Zaengle said to his team as it came off the field.

Liam Beaulieu, Drew Frankenberg, Perry and Austin Gallagher had some nice clears in front of Laughlin but when the Westside goalie was left on his own, he had the great save within him.

Serrani said he thought the ball skimmed off teammate Ken Lynch's head and that he was then able to settle it and get it to Blanchard for the left-footed golden goal.

It was the second time this season that Blanchard got the game-winning goal against the Phantoms with his left foot.

The teams met twice during the season, the first being a scoreless tie and the second a 1-0 West Rutland victory.

"I know it stings to lose especially for the seniors," Wilson said. "But I am very proud of this team."

Valerio, Parker and Logan Starling were those seniors playing their final soccer game in the maroon and white.

"West Rutland is going to be a tough out. They are quick, they are tough and Kyle is unbelievable," Wilson said.

The No. 7 Golden Horde take a 10-4-2 record into the semifinals. They will travel to No. 3 Arlington on Tuesday.

Arlington did its part by beating White River Valley on Saturday, 3-1.

The Golden Horde and Eagles met during the season but it was back on Sept. 4, the Eagles blanking the Horde 2-0.